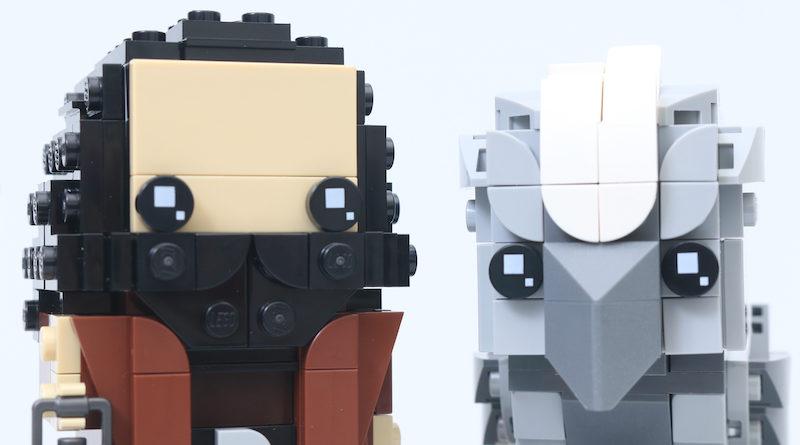 40412 Hagrid & Buckbeak is a free LEGO gift with qualifying purchases, and reflective of everything that BrickHeadz does right.

There have not been many Harry Potter-themed BrickHeadz released during the cube character theme’s three years so far, and 40412 Hagrid & Buckbeak will be the first since 2018.

Where 41621 Ron Weasley & Albus Dumbledore, 41616 Hermione Granger and 41615 Harry Potter & Hedwig were all on general release, 40412 Hagrid & Buckbeak is due to be made available as a gift with qualifying purchases at LEGO.com and in LEGO stores that are open.

The set would otherwise retail for £17.99 or $19.99 and is even listed at that value on the US version of LEGO.com, but, will instead be available for free from September 1-15 for those spending $100 (and presumably £100) on LEGO Harry Potter sets, whilst stocks last.

Essentially, anyone picking up 75978 Diagon Alley will net this character-based build for free.

So whether you are invested in BrickHeadz as a collection and theme by this point or not, Harry Potter fans lucky enough to be able to afford that gigantic upcoming set will automatically end up with a copy of 40412 Hagrid & Buckbeak.

For what BrickHeadz is as a build concept, it has stayed consistent over the three-and-a-half years as a theme, with a cuboid approach to character design that is at once both endearing and familiar to both the source material and other similar products already out there.

Hagrid’s design in particular is smart, for how even in just building in black texture and shape can be found in his beard and hair.

BrickHeadz knows what it is in identity and plays to its strengths well, and 40412 Hagrid & Buckbeak is no exception to this. As a free gift with purchase, it’s a higher value item than a lot of previous GWPs and a neat duo for Harry Potter fans to sit somewhere on display.

40412 Hagrid & Buckbeak will be available at LEGO.com and in LEGO stores whilst stocks last from September 1-15 as a gift with purchases of $100 (and presumably £100) of LEGO Harry Potter sets.

In addition, during the same September 1-15 period, $40 in-store purchases in at least US stores will qualify for a free copy of LEGO Harry Potter 30420 Harry Potter and Hedwig: Owl Delivery.

There are a number of September freebies coming, at least in US stores and most likely across the UK and other markets too.