Jurassic World: Fallen Kingdom sees dinosaurs making an appearance in the LEGO product line – but the Indoraptor is not the freakiest beast ever committed to bricks…

Dino Attack is a theme that many fans missed. Launched as part of a slew of new themes in the bid to re-energise the LEGO Group in the early 2000s, it was definitely unlike anything which had come before. With a focus on genetically engineered dinosaurs, it is hard not to see a few paralells between this theme and [geot exclude_country=”United States”]Jurassic World: Fallen Kingdom[/geot][geot country=”United States”]Jurassic World: Fallen Kingdom[/geot].

The premise is that radioactive dinosaurs, created by mad scienctists, are being put down by an intrepid minifigure crew operating anarsenal of deadly and enormous vehicles. It gives a sense of a Mad Max meets Jurassic Park post apocalyptic hellscape, and was so dark a premise that European versions of the sets were dramatically different – including cages and capture devices in lieu of guns, and branded with the softer name of “Dino 2010”.

Though not the first moulded dinosaurs to be produced, Dino Attack’s prehistoric creatures remain king of the LEGO beasts – they have never been beaten either in terms of size or sheer intimidating appearance. Four different types of dinosaur were released in 2005, found in the following sets… 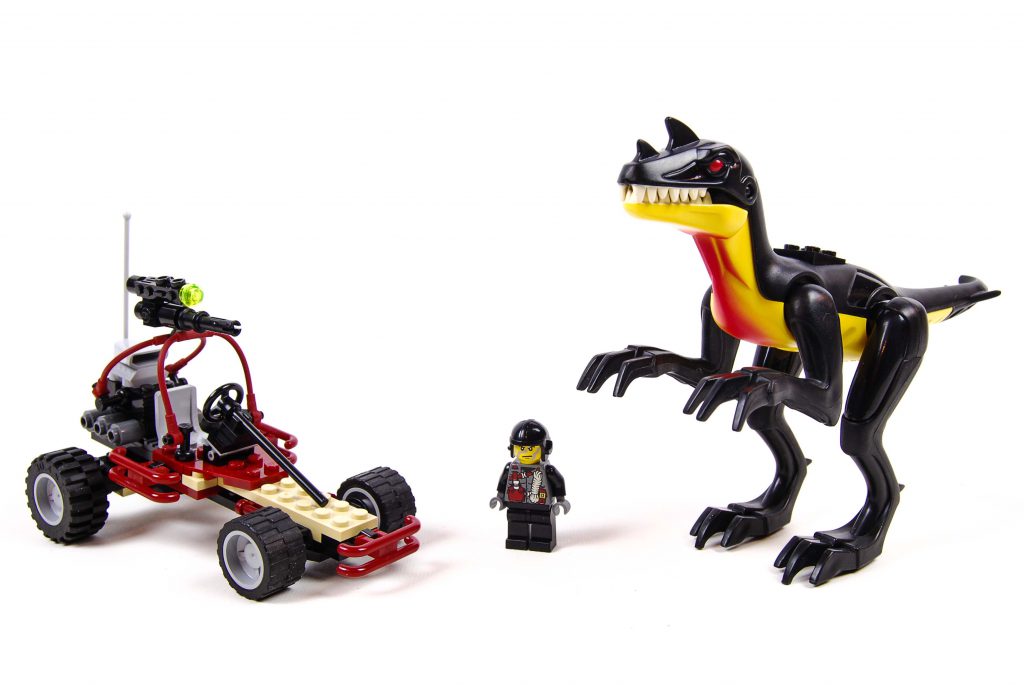 The only set to include the towering Raptor, 7474 Urban Avenger vs. Raptor is a case study in excellent small set design. Though small is certainly not the operative word for the raptor. Designed to look like a fast driving go-cart or dune buggy, everything  needed to take on the dino-apocalypse is included; machine gun with laser sight, check. Oversized V-6 engine, check.

The vehicle also stands out for its exposed turning shaft which terminates without a connection, this is the only example of this in any System car. Incredibly, even when adjusted for inflation, 7474 cost less than [geot exclude_country=”United States”]£10[/geot][geot country=”United States”]$14[/geot]. Compare this dinosaur to what is availables in the Jurassic World sets and it is hard to avoid lamenting how expensive LEGO sets have become. 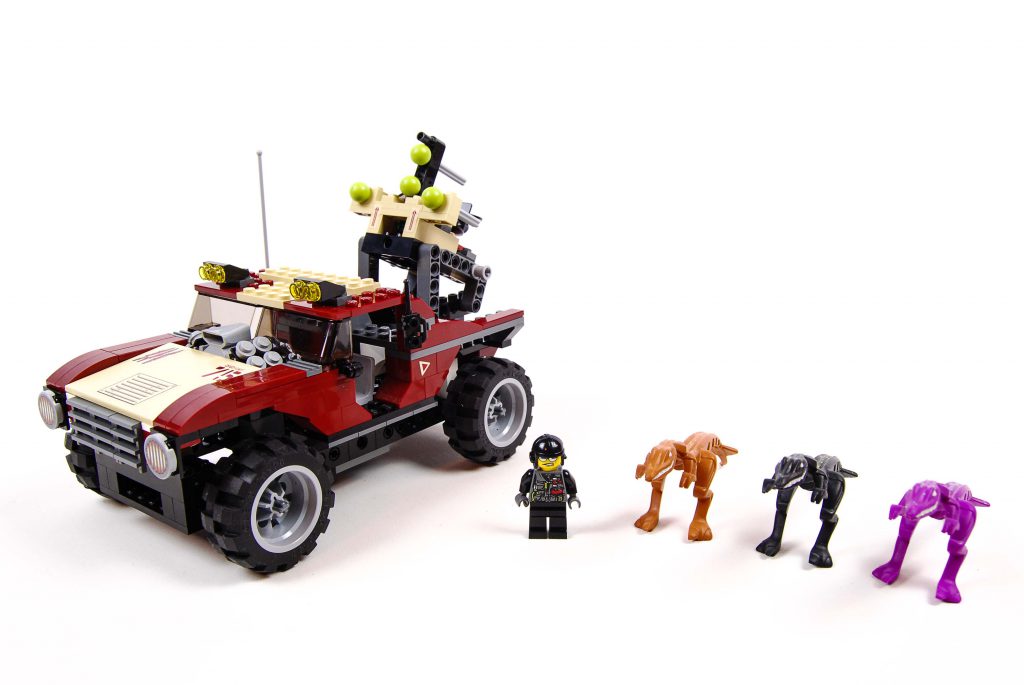 The mid-range set of the line looks eerily similar to some later sets that have popped up in more recent dino related themes; clearly it was an inspriation. 7475 Fire Hammer vs. Mutant Lizard is an absolute product of its time. It is bigger than expected for the price point with a mix of old and new build techniques. This set also sports the spring loaded dart mechanism that could be found across multiple themes at that time including Castle, Vikings and more.

Facing off against the lone hero is the weakest of the menacing Dino Attack beasts. These mutant lizards are oddly coloured and made of rubbery plastic (one could also be found in 7473 Steel Sprinter vs. Mutant Lizard, the fifth set in this theme). While they do technically have tubes in their feet to attach to studs, they don’t even look like LEGO elements. Could it be that the writers of the current Jurassic movies played with Dino Attack as children and absorbed the genetic manipulation ideas?

The spring loaded dart launcher works surprisingly well. It utilises a recycled playable football component that uses a spring loaded mechanism to pass or shoot the ball. For such a specific use, the LEGO Group’s designers actually found a fair number of applications for that component outside of the soccer world. The European version of this set includes a winch system, which would make the American version almost perfect if it had been included. 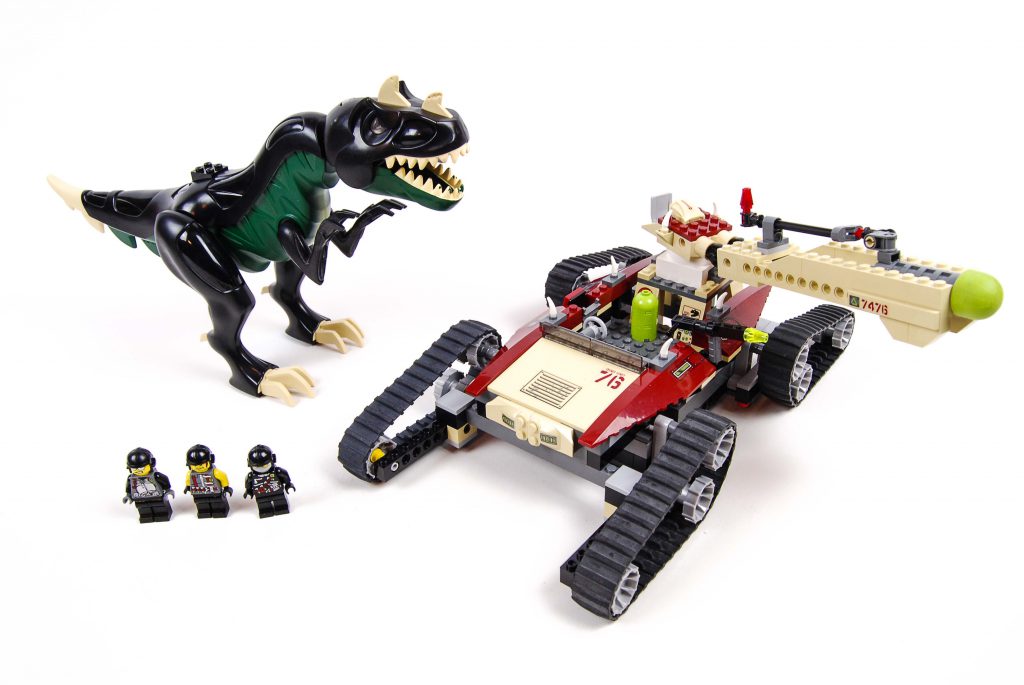 The LEGO Group really wanted a vehicle with four treads around this time. Both 7476 Iron Predator vs. T-Rex and Exo-Force’s 7706 Mobile Defense Tank tried to use them. Both suffer from the same short coming – friction. It is almost impossible to push hard enough to make these vehicles roll. It is also strange that so many of these vehicles that are supposed to confront enormous dinosaurs are open topped. Despite these shortcomings, the Iron Predator is a decidedly fun set to play with.

Two aspects of this set are almost ridiculously large: the t-rex and the gun designed to bring it down. To date this is the longest barrel for a spring-loaded LEGO gun ever produced. The t-rex features glowing eyes that shine red when a button the head is pushed. His legs are also articulated outwards, along with front and back movement. An identical version, although with a red chest, came in the largest Dino Attack set –  7477 T-1 Typhoon vs. T-Rex. Both absolutely dwarf the modern t-rex. 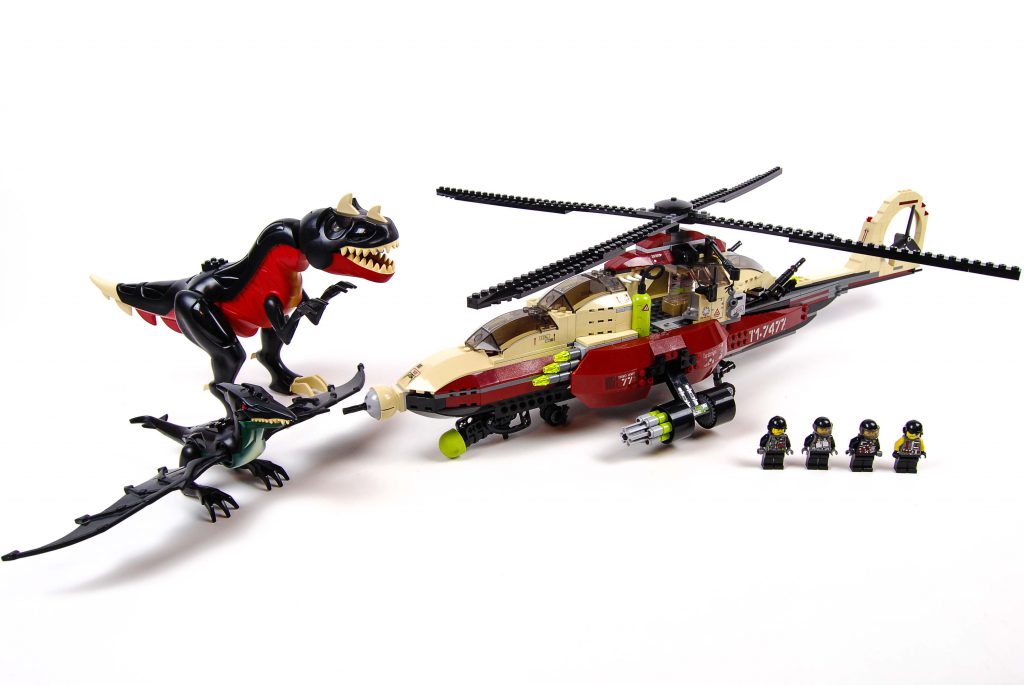 The largest of the Dino Attack sets boasts not one, but two enormous prehistoric creatures. As mentioned, one is a red bellied version of the t-rex was, partnered this time with a pteranodon that looks like it flew straight from the depths of hell. To combat such monstrosities, four brave minifigures fly the largest LEGO System helicopter ever released, the T-1 Typhoon. It is difficult to understate the size of this copter, and it is hard to imagine where a child might store this – the rotors alone are nearly half a meter from tip to tip. It is impossible to hold it and not be impressed.

Weapons abound on the Typhoon. A rear turret rotates, providing coverage from the back against the pursuing Pteranodon. Two side mounted gatling guns lay waste to anything in their path, and a spring loaded nose gun is flanked by missiles on either side. This is intended to be a machine of death and no mistake, that comes across.  A central open cabin and platform serve as a command center behind the dual cockpits, as well as a staging area for aerial rescues with the winch.