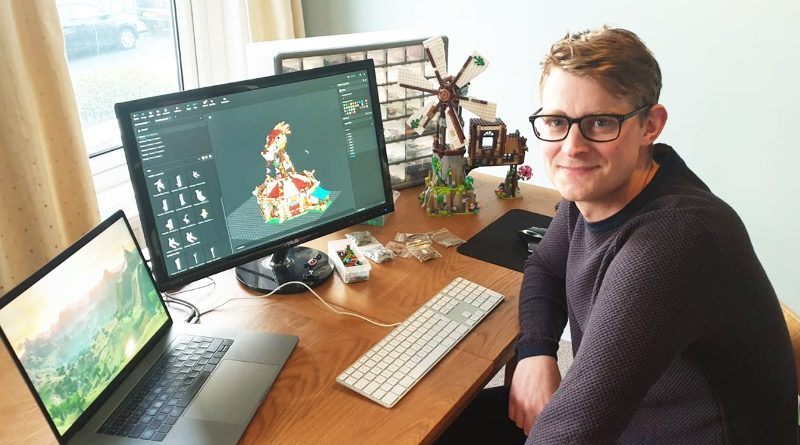 The designer of The Mountain Windmill speaks exclusively to Brick Fanatics about his involvement in the LEGO BrickLink Designer Program.

Last month, the LEGO Group and BrickLink announced the latest iteration of the secondary marketplace’s designer program, which will give rejected LEGO Ideas projects a second chance. The designers of those models are currently hard at work in the pre-production phase, revising and reassembling their builds to bring them up to scratch for the crowdfunding phase.

Among them is Harry Finkel, the fan designer behind The Mountain Windmill, which reached 10,000 supporters on LEGO Ideas in May 2020 – but was ultimately just one of 34 projects rejected in February 2021’s record-breaking review results. Harry now has a second chance to get his model in the hands of LEGO fans through the BrickLink Designer Program.

We reached out to the talented builder – whose other 10K projects include Snow White and the Seven Dwarfs and The Ocean House – to find out how he got involved with the program, how the development process is going, and how the LEGO Group plans to test his design.

Brick Fanatics: When did the LEGO Group reach out to you for involvement?

Harry: I received an email a couple of weeks after the latest batch of LEGO Ideas results, inviting me to the program.

Did you get to choose which of your projects to include, or did the LEGO Group specifically request the Mountain Windmill?

The LEGO Group specifically requested the sets. I was also invited to include The Ocean House set, which was in the same review as The Mountain Windmill. However, due to time pressures and life being somewhat hectic at the moment I was concerned I wouldn’t have the necessary time to dedicate to two sets, so I chose the windmill.

How far are you into the process of refining the model for production?

I am currently in the ‘digital modelling’ phase. I have already submitted a first iteration with instructions and am now awaiting the results of the first test build. In the meantime I continue to iterate. I have a built copy of the set based on an early version, and I’m currently in the process of putting together a BrickLink order to test the latest version and instructions from my end.

Do you anticipate needing to make (or have you made) many changes from your initial concept?

Yes. For my original submission I had adopted the ‘LEGO have the power to print this piece in this colour’ approach. With the designer program, however, we are limited to currently available palettes only, and this was somewhat problematic. There was also the issue of elements that LEGO no longer print. I was unaware, for example, that the Technic water wheel is no longer printed, and this was a key component in the fan.

Can you tell us any specifics about the testing process?

The set cannot purely be tested in Stud.io. Things such as stability and build experience are very hard to get an accurate read on without building physically. Currently, the designers have until the end of March to submit the digital models to the BrickLink/LEGO team, at which point physical building and testing will start. Then starts a back and forth between the designers and the builders to try to get the set approved for production. This is exciting and nerve-wracking as it’s hard to know what to expect!

What’s your take on the program as a whole?

I think it is a great scheme! It’s a unique experience for those who participate as well as offering up a second chance for sets that many people have supported and would like to see made. It brings with it a lot of challenges, but it is fun and exciting. I also think the BrickLink Designer Program allows opportunity for sets that perhaps would not likely be approved as official LEGO products for being too niche, or too similar to an existing product. I look forward to seeing how it plays out now and in the future.

You can find out more about Harry’s Mountain Windmill project over at BrickLink. If you’d like to learn more about the BrickLink Designer Program itself, click here. Or if you’d just like to see the full list of projects in the pre-production phase – minus three from the designer of 21310 Old Fishing Store – we’ve got you covered there, too.