In putting together the premiere issue of Brick Fanatics Magazine, the new LEGO publication all about the brick, we wanted to create something to celebrate the large scale 75222 Betrayal at Cloud City project we had produced inside. The front cover is also our first opportunity to showcase what’s possible in brick form, so we wanted to create something special that our readers won’t have seen before.

Using the famous scene between Darth Vader and Luke Skywalker from The Empire Strikes Back as our inspiration, and the LEGO version of the platform at Cloud City from 75222 Betrayal at Cloud City as the starting point to our build, we had an idea of what we wanted to achieve.

Alongside the lighting and effects we could apply to the cover shot, we needed a substantial background built, to fill the entire image and to effectively mimic the large drop that Luke falls into at the end of Star Wars Episode V. Here’s what we put together, and how we built it: 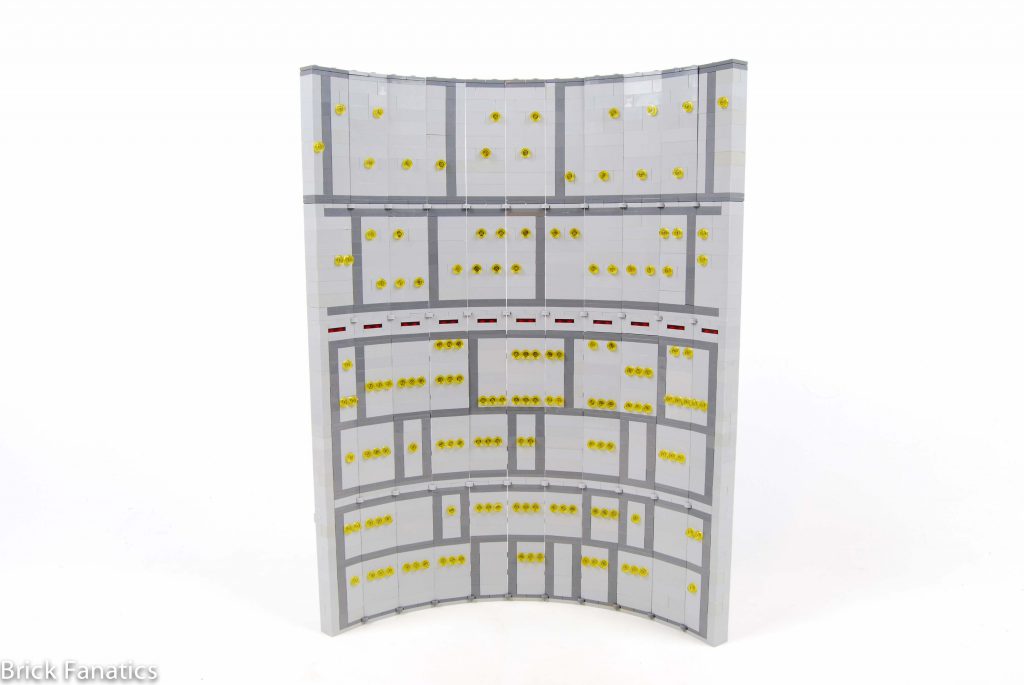 The key to this build is forced perspective. The walls of Cloud City’s circular spire are inlaid with a variety of panels. These are outlined by a dark boarder and filled with irregular lines of lights. To make this build look taller than it actually is, and so the background to the cover shot much bigger than it actually is, each row of panels is one brick taller than the one below, whilst the lights near the bottom are placed closer together than those nearer to the top. When looking down this creates the illusion that the drop is much farther than it is in reality.

Each section of the wall is built on the same footprint – 2×4 studs. About every 10 bricks of height a layer of hinges needs to be placed in order to keep everything together and make the build solid. This break in the pattern of panels is movie accurate and allows for additional details, like the red lights, to be inserted.

The wall sections should have bricks with studs on the side inserted every so often. Their purpose is to keep the wall from folding flat; it promotes the curve we are looking for. Insert a layer of dark grey bricks two plates thick at the top of each section and define the wall panels with dark grey bricks one stud wide. Don’t forget to vary the placement of the lights but always keep them in a line.

Separating the ledge section from 75222 Betrayal at Cloud City where Luke and Vader do battle and placing it in front of the finished spire build created our cover shot which we carefully photographed, adjusting angle and lighting, before afterwards applying subtle effects.

We chose our final cover option and cropped the image before adding cover lines, to create Issue 1’s front cover.

Let us know if you are inspired to do a version of this build yourself. You can support the work that Brick Fanatics does by purchasing your LEGO through our official affiliate links, and purchasing a single copy of or subscription to Brick Fanatics Magazine, the print publication for fans of LEGO.