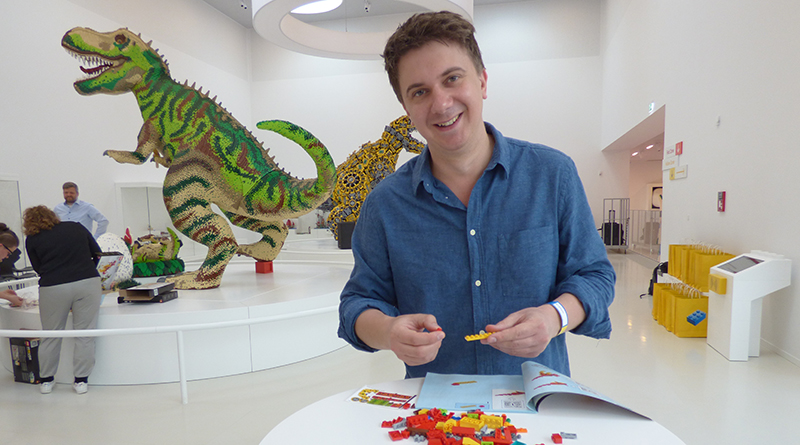 Anyone who has had the pleasure of visiting the LEGO House in Billund, Denmark, knows what sits at the topmost brick in the structure. The Masterpiece Gallery is where incredible works of art, fan creations from around the world are displayed. They are watched over by three enormous dinosaur models, one built with DUPLO, one built with Technic and one built with regular System elements. Each one is stepping on a LEGO brick, which is apparently how the dinosaur got is ‘rooaaaar’.

It was announced in April that the newest exclusive LEGO House set, to serve as the perfect souvenir for guests, would be 40366 LEGO House Dinosaurs. The box contains the bricks and instructions to build all three of the prehistoric beasts, with the colours and patterns reflecting the type of elements the real versions are built from.

During LEGO Fan Media Days 2019, attendees were invited to the Masterpiece Gallery at the LEGO House before opening. While the Home of the Brick was completely empty, with no guests yet rustling through bricks, Brick Fanatics was able to build one of the dinosaurs from the set right underneath the sculpture it was modelled on.

LEGO Designer Nina Koopman presented the set and gave some background, explaining her process. Then, each attendee built one dinosaur from the box. I put together the DUPLO dinosaur, which in the set is made up of regular pieces enhanced by stickers.

There is something very special about building in the LEGO House. Whilst spending time in the venue, it is never far from your mind that this a brick’s throw from where the entire LEGO company was founded and has been for almost a century. That gives building in the Red Zone, or the Green Zone, or down in the square an extra something – although admittedly, I have a tendency to romanticise a sense of place.

Aside from a few white bricks next to the benches though, the Masterpiece Gallery is not typically a location for building. So that made putting the bricks together in the inspiring room unique, with the experience enhanced further by knowing that I was building one of the mini dinosaur sculptures right underneath the actual dinosaur sculpture.

Once everyone had completed their models, they were lined up beneath the green System dinosaur. The build session was over and it was time to prepare for interviews.