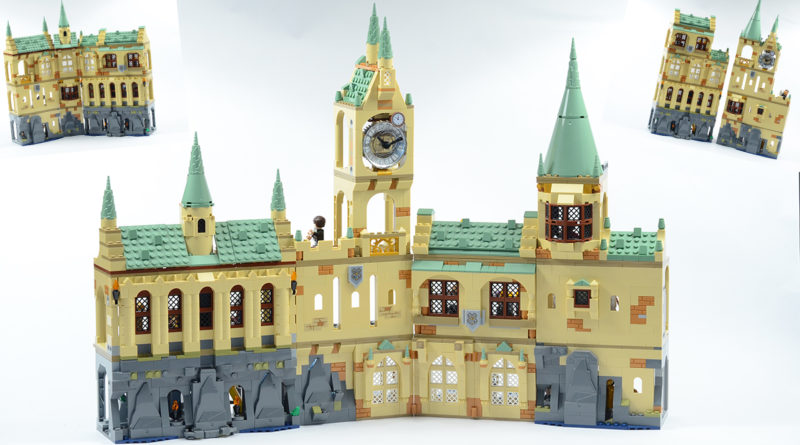 The LEGO Group’s new approach to Harry Potter’s wizarding school is expanding this year with 76398 Hogwarts Hospital Wing, so here’s how it looks combined with current sets.

In 2021, the LEGO Harry Potter design team relaunched their line of Hogwarts sets with an eye towards making an ever-expanding, modular Hogwarts system. This system lets the LEGO Group keep releasing Hogwarts sets without being constrained by how Hogwarts looks in the Harry Potter film series, and at a variety of sizes, from single-module sets covering one room and scene all the way to large sets containing multiple modules ranging in size.

All of these sets follow similar design rules for the most part: modules are eight studs deep and eight, 16 or 24 studs wide. Every roof component is also a removable module. Below is a quick look at last year’s summer wave, but you can also click here for a closer look at the first few sets combined.

Even across these initial builds, there were already some idiosyncrasies and shortcomings present: for instance, the door section of 76395 Hogwarts First Flying Lesson doesn’t follow these rules, and the Chamber of Secrets module has a bit of Great Hall interior attached to it, making it awkward on the interior to attach anything other than the Great Hall module.

Certain modules are also intended to specifically align with others, like the trap door in 76387 Hogwarts Fluffy Encounter sitting above the Devil’s Snare module also found in that set, or 76386 Hogwarts Polyjuice Potion Mistake ideally being placed above the module in 76389 Hogwarts Chamber of Secrets that contains the chute down to the eponymous chamber.

In any case, these minor oddities don’t prevent all the modules being arranged however you like, and 2022 brings even more variety into the system. 76401 Hogwarts Courtyard: Sirius’s Rescue and 76402 Hogwarts: Dumbledore’s Office, both to be released in June 2022, will introduce corner modules, while 76398 Hogwarts Hospital Wing provides the ability to hinge Hogwarts in one, two, or three sections.

In this article we’ll be taking a look at integrating the modules of 76398 Hogwarts Hospital Wing with those found in 76386 Hogwarts Polyjuice Potion Mistake, 76387 Hogwarts Fluffy Encounter, and 76389 Hogwarts Chamber of Secrets.

First, let’s look at the modules themselves. There are four provided: the 8×24 hospital wing, which can be hinged in two places, two 8×8 roof sections, and the 8×8 clock module, which is both a module of full height and a roof section, since its roof does not detach.

In our review of 76398 Hogwarts Hospital Wing, we said that the clock section didn’t look very good above the hospital wing section, so here’s a different module in the clock’s place. The different colour scheme for the window frames and lattices clashes a little bit, but this looks better to us here than the clock does.

Now let’s start putting more modules together. In the configuration below, we’ve kept the sections we mentioned earlier together, with the Great Hall above the Chamber of Secrets, the Forbidden Corridor above the Devil’s Snare, and the bathroom above the chute down to the chamber. While the hospital wing does not belong on Hogwarts’ lowest level, achieving locational accuracy is neither the point of this system nor really a possibility at all, and this configuration looks surprisingly good to us.

Next we went for a compact Hogwarts making use of the Hospital Wing’s ability to hinge in two places, creating three attached segments of 8×8, 8×16 and 8×24 studs. This arrangement looks a bit haphazard, but we’re just demonstrating what is possible.

Next is a configuration that hinges the hospital wing in just one place, creating two towers with bases of 8×24 studs. Though the Great Hall no longer looks like itself at all, this setup looks decently Hogwarts-y (technical term). Finally, we really threw the modules together at random, creating two disconnected towers that hardly look good but could be something a kid playing around with the system cooks up.

A lot has been said about the 2021 Hogwarts system in comparison to the wave of Hogwarts sets the LEGO Group released from 2018 to 2020, covering major segments of Hogwarts with an eye to film-accurate exteriors. Since the goals of the new system are so obviously different to those of the previous one, even when the design team covers similar ground the resulting sets are quite distinct from their predecessors. Nonetheless, we thought it would be fun to pit 76398 Hogwarts Hospital Wing (and clock tower) against 75948 Hogwarts Clock Tower (which also contains a hospital wing).

In our review, we already described how 76398 Hogwarts Hospital Wing looks pretty bad as a clock tower, and that’s ever more apparent next to 75948 Hogwarts Clock Tower – a set of well-chosen proportions and covered in pleasing designs that emulate the look of the clock tower in Harry Potter and the Prisoner of Azkaban especially (as well as later films in the series). You can see how the designers have tried to incorporate similar designs in the clock module of the newer set, but it really looks befuddled atop the hospital module.

Their interiors are of course vastly different, with the new set solely focused on recreating Hogwarts’ hospital wing while the old one includes a bit of fairly blank entrance hall, Professor Moody’s Defence Against the Dark Arts classroom, and finally a small bit of hospital wing crammed under the rafters – though it should be pointed out that this positioning is accurate to the films, where the hospital wing is roughly adjacent and on level to the clock face.

Finally, here are the two Hospital Wings closer together. The side tables and lamps share some design features, while the beds are entirely different and even a different colour, with the older set using sand green bedding.

All in all, while obviously no match for its predecessor’s exterior look, 76398 Hogwarts Hospital Wing opens up intriguing possibilities for the newer modular Hogwarts system, and delivers great interior detail for a proper Hogwarts hospital wing.

Try your own combinations by picking up 76398 Hogwarts Hospital Wing – and last year’s Hogwarts sets – at LEGO.com.

Consider supporting the work that Brick Fanatics does by purchasing your LEGO Harry Potter sets using our affiliate links. Thank you!