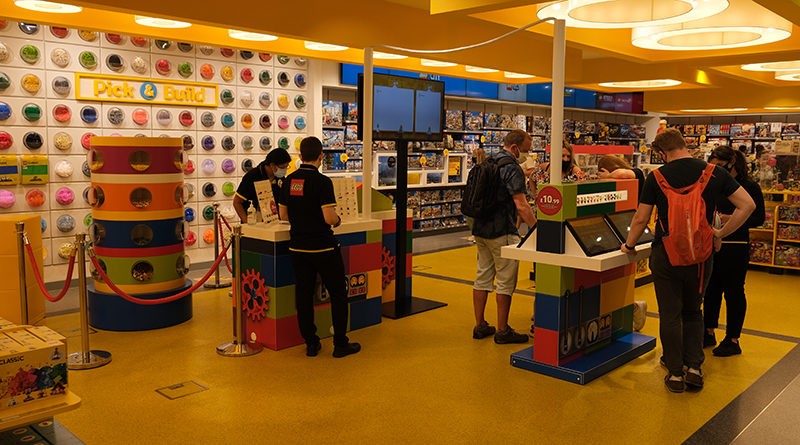 LEGO Minifigure Factory is a relatively new experience for select LEGO Stores that has now arrived at London’s Leicester Square flagship. To give fans more than just the usual retail offering, select flagship stores include special opportunities that go further than what a shop can usually provide. Leicester Square already had the Mosaic Maker, where fans can get a LEGO portrait made in minutes.

Select flagship stores already have Minifigure Factory, but this is the first time it has been made available in the UK (outside of a trial run).

The experience begins by purchasing the box for £10.99 at the checkout. That box is then taken over to the LEGO Minifigure factory terminals, where it is placed in front of the screen. Presumably through magic, the screen then activates and reveals the five stages to making a minifigure.

Stage one is to input the name of the creator – or whatever they would like to be printed on the 1×3 brick that comes with the character.

Next, it’s time to do some designing on both the front and back of the minifigure’s torso using the touch screen. There are four options; Clothing, Painter, Decorations and Typer.

Clothing allows to select from pre-designed templates, many of which are recognisable from existing minifigures, some are unique, and a few are even unique to the London location. Painter allows those with a very steady finger to draw something themselves, but it’s very tricky to do well. Decorations features dozens of icons to add to the minifigure, some exclusive to the Leicester Square store, which can be repositioned and resized. Typer allows the user to add text.

Any of the different options can be combined in any number of ways. For example, a pre-designed Clothing option could be selected, before painting over it, adding an icon and adding text. The icons and text can be moved around and resized.

It is unlikely anyone will find too little to choose from and will instead be agonising about what to include and what not to include on their minifigure. There are plenty of torso designs to choose from, including one with a Classic Space logo, with many available in male and female options. There’s also plenty of icons, some featuring emoji type symbols but most featuring classic LEGO parts, animals and bricks.

The process is for the most part very intuitive. Thanks to how ubiquitous touch screen technology has become, it doesn’t take long to figure out how to move the icons around and resize them.

In this example, the green sweater collar has been selected from the pre-designs, then the London Bus icon has been added to it. On the reverse, the ‘I love London’ logo has been added from the icons, with ‘2020’ added using the text editor with the font and size amended.

That’s the touch screen part over – next it is time to visit the printing station. A screen above it shows where each person is in the queue. At the weekend this could get very busy and fans would be well advised to start the Minifigure Factory first, go do some browsing, then come back when their character is ready to be printed.

Due to measures in place to limit the spread of coronavirus, this is operating slightly differently to how it usually would. The attendant takes the blank torso and 1×3 brick, which are in a special holder, then places it into the printing machine. First, the front is printed, then the tray of minifigures is flipped over and the back is printed. There is a glass screen at the top of the printer, so fans can watch their designs be applied to the white torsos.

While the parts are printing and then drying for a couple of minutes, there is an opportunity to choose a head, hair/hat, legs and accessory. This is from a selection that will be familiar from the Build a Minifigure station, so is perhaps a little more limited than fans might hope for. They can all be swapped later of course, so it’s not really a dealbreaker.

Once the printed torsos are ready, the attendant will pop them out of the case and the minifigure can be assembled. As well as the custom printed torsos, fans get a 1×3 brick with ‘LEGO Leicester Square’ printed on one side and their name printed on the other.

The box represents a little factory that can display both the minifigure and the 1×3 brick.

Given the location, it made sense to create a London-centric minifigure.

This smiley fellow features a pre-designed sweater neck design on the front with a familiar skeleton icon and text entry for ‘Graham’. On the reverse are three separate LEGO brick icons overlapping and a LEGO shark icon.

Under very, very close scrutiny, the printing is not quite up the same definition as it is on a regular minifigure. Given that it is being printed there and then while watching, it is absolutely excellent.

At £10.99 a time, only David Beckham has the money to populate a LEGO City layout this way. But it isn’t about just making a minifigure, it’s about the whole experience and walking away with a unique, one-of-a-kind minifigure that in all likelihood no-one else, anywhere, owns.

While the price is higher than it usually is for a minifigure, the uniqueness of the experience, space it takes up in the store, cost of the technology and development time it must have taken all make it understandable. For anyone looking for a unique, customised LEGO souvenir, it is a nice opportunity to get something smaller and cheaper than the £99.99 Mosaic Maker.

Every LEGO fan owes it to themselves to design at least one minifigure themselves and enjoy the novelty of this experience.