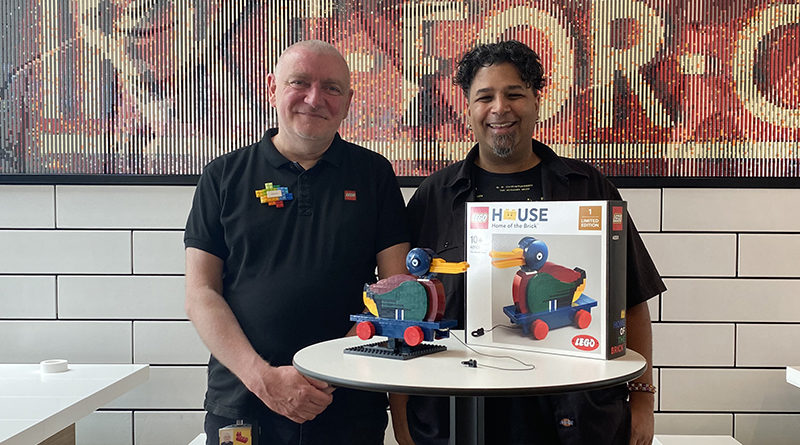 A new exclusive is about to launch in LEGO House, the beloved venue in Billund, Denmark, the home of the LEGO Group. Kicking off a new series of LEGO House Limited Editions is 40501 The Wooden Duck, a set inspired by a classic wooden toy produced in the earliest days of the company. It forms the basis of the well-known story in which Ole Kirk Christiansen taught his son Godtfred the meaning of his motto, ‘only the best is good enough’.

The set will be available to buy when the LEGO House reopens on Monday, June 22.

LEGO House Senior Experience Designer Stuart Harris put together a first draft of the set, known as the ‘sketch model’, before it was passed to LEGO Model Designer – and former Brick Fanatic – Jme Wheeler, who joined the LEGO Group last year.

In this exclusive interview, they reveal what goes into capturing a LEGO icon.

How did this set, as the first in a new series, come about?

Stuart: We set out a roadmap of how we were going to approach this and it just made sense that we started with a real icon that really links the LEGO House to the LEGO Group. This was a real sort of bridge product between those two things and the family’s also very much involved with that. I was really pleased when I saw the brief and that it was the duck.

Are the Kristiansen family usually involved in LEGO House exclusives?

Stuart: No, just with this particular icon that is so important to the LEGO Group, they had a look at it and had input on it.

Where did the design process begin?

Stuart: It was back to the source if you like, because we have the wooden duck here in the LEGO House basement, so I went down and sat in front of it for a long time, hoping would nobody call security. Then we had the other one on display in the Idea House so basically I just went and took a good long look at the model, at the original wooden duck. There are actually drawings as part of the exhibition where you can see the plan drawings of it with the dimensions on and that sort of stuff. That was the starting point.

I knew I wanted to make a 1:1 copy, as close to the profile of the original duck as possible, so that’s where I started. I have a few examples but they were a lot smaller, trying different ways of getting the smooth curvaceous look.

Are there many copies of the wooden duck at the LEGO Group that you had access to?

Editor’s note: The LEGO Idea House is a private exhibition where the LEGO Group can take company guests and offer days out for schoolchildren.

How did you decide to go with the familiar burgundy colour?

Stuart: I ended up building two versions, so we had the colourful one and we had the burgundy one. I took those as the options to show the family to get approval on which direction to go in. Then I made a case for why I thought it should be the burgundy and green one.

Did you try many different mechanisms for making the beak move?

Stuart: Three or four – some went further than others, some were non-starters. I tried different things with Technic beams, different cam arrangements and stuff. I knew it needed to be something that was pretty robust which is also why I made the decision to go with three studs wide inside, to give a whole brick’s width in the middle there to make something that was quite strong.

Jme, congratulations on your first model. Where did you start from on the project?

Stuart: That’s why it says number one on the box is it? [laughs]

Jme: Stuart’s sketch model, that’s what I got. So it was basically just looking at that and figuring how it holds together. There were a couple of places, where it works for the sketch model but it doesn’t work for a product, in terms of stability or how to communicate it. Most people are not going to see that the work that I did if they compare it to the sketch model, but there was a lot of it.

What mechanism did you use on the inside?

Jme: It’s still just a Technic beam actuator, the one in the final model is a little different because I made it thicker at the bottom. It’s three modules wide to fill the entire inside, partially to make sure that it works and also to keep it from wiggling inside, so when you run it, it runs nice and smooth.

I was surprised that we got away with having it be loose inside the body, because initially I tried having an actual cam where it was connected, but it was too difficult to build in and explain it,  because then you have it hanging out for a really long time – it didn’t work in the build flow.

What was it like to build such a LEGO icon as your first model, and was there any additional pressure?

Jme: It’s super cool to be a fan and have a lot of knowledge about the history of the company, then be given something like this to do. I don’t think I really felt additional pressure because I was already new, I already had that pressure of, ‘okay I got here now, I have to make sure I’m worth it’.

What are you most pleased with about the finished set?

Stuart: I was kind of nervous the first time I built it, because I knew my model was a little bit weak and I was hoping that would get improved on. I am happy with how robust and solid and reliable it is, how well the mechanism works. I am really, really happy with it.

Jme: I am happy that it is what it is I guess, that it’s my first thing; that it is something that is iconic and hopefully people really like. Stuart just did such a great job of getting it to look like the real thing that any complaints about this set would be frivolous.

Stuart: [laughs] We’ll pass them on to Ole Kirk Christiansen.

LEGO House will reopen on June 22, with special measures in place to allow guests to social distance while visiting.