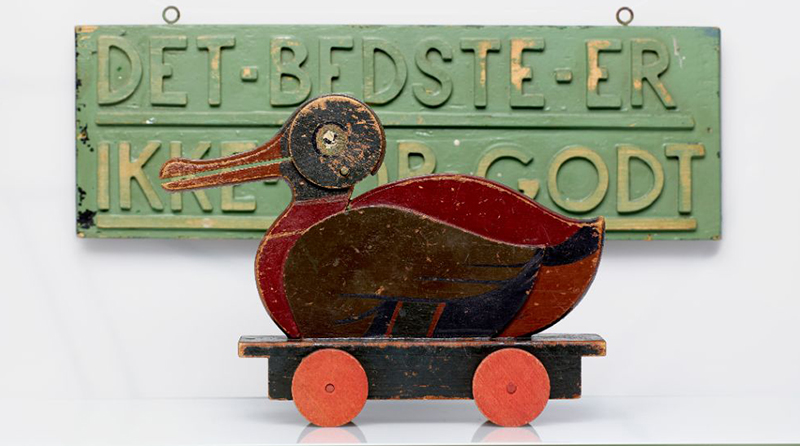 To celebrate the history of the LEGO Group, a new series of limited edition sets launches today at LEGO House. Visitors to the attraction in Billund, Denmark, will be able to take home the exclusive 40501 The Wooden Duck set, inspired by the iconic wooden duck that has become a symbol of the LEGO Group. The story behind it goes back almost 100 years.

When the founder of the LEGO Group, Ole Kirk Kristiansen, was having his son, Godtfred, help out in the workshop, the boy was working on wooden ducks. Returning from the train station where he had delivered them, he was delighted to tell his father he had saved money: “I gave the ducks just two coats of varnish, not three as we usually do.”

Oke Kirk sent his son back to the train station to collect them and give them the final coat of varnish. The lesson that the future owner of the LEGO Group learned was that ‘only the best is good enough’, which he carved into a wooden sign for the workshop wall.

To find out more about the story, the duck and wooden toy development in general, Brick Fanatics speaks to LEGO Corporate Historian Signe Wiese.

What is the significance of the wooden duck to the LEGO Group?

They have basically become this symbol of the whole company spirit, and the company motto that ‘only the best is good enough’, because of this special story connected to it. The story is about the focus on quality passing from Ole Kirk to his son Godtfred in the mid-1930s, so for that reason it has become a symbol of quality and of company spirit.

The story connected with the duck is a story that Godtfred himself has told us in an interview from the early 1980s, where he basically is telling the story of how he as a teenager, as a child, was working on these wooden ducks and he skipped one layer of lacquer. His father told him, ‘that’s simply not the way we do it here’ and he was made to do it all over again and that was how he learned about how important quality is. That’s the reason why it became the duck. Had Godtfred been working on a shipment of dogs or something it would have been a different story.

How did the LEGO Group become involved with wooden toy production?

The first pieces of wooden toys were made in 1932 and it was basically a reaction to the Great Depression. Because in the beginning of the 1930s, the effect from the Great Depression had spread all over the world. In Denmark it caused a really serious agricultural crisis as it did in the UK and Germany and so on. Even though Ole Kirk wasn’t a farmer, he had a lot of customers who were farmers and suddenly they weren’t able to buy any of his work anymore. They weren’t building houses or buying furniture and so on.

Ole Kirk had to basically figure out a new way to put food on the table for his family. One of the ways he decided to do this was to take all the wood he had in his storage and use it for producing smaller things. In 1932 he started doing toys, the most important thing for us, but the product portfolio back then would also include smaller ironing boards and step ladders so he just tried to do whatever he could do to get food on the table for his family – that was the basic foundation for him starting toy production.

Did he originally plan to continue toy production or go back to traditional carpentry?

At first we know for sure he was planning to go back into the carpentry business, but first of all he started being able to sell his toys, then he also experienced a lot of happiness and a lot of joy by producing toys. He ended up deciding this is the way that he would earn his living for the rest of his life and most of it had to do with the fact he had so many happy children because of his toys.

I think he just believed in this idea because it is a big step, but this is something you see a lot of times in history with this family, they are really good at trusting in their crazy ideas. And Ole deciding to do toys is the first time we see that.

When were the original wooden ducks produced?

The type of wooden duck reproduced into this LEGO House set, we started doing those in 1935 then we continued the production until closing down wooden toy production in 1960.

Was it usual for toys to be produced for such long periods of time back then?

Well the duck specifically is the one piece of wooden toy we have done for the longest time, so it wouldn’t be that normal to have a toy going on for that long of a period. Of course the wooden toys were produced for longer periods than toys we see today though.

Why is there variation in the colour of the wooden ducks?

Then I guess also it’s a fashion thing, like at one point in time you had more bright colours and you probably also throughout time would get more and more colours to choose from, so that’s probably the reason why they changed the look throughout time. We did the first one hand painted of course then they started spray painting, and So we did hand painted, then we skipped the

Do many samples remain within the company today?

How did you become involved with the research for this exclusive LEGO House set?

It started with Stuart reaching out to us and then we basically pulled everything we had from the archive, lots of different versions of the wooden duck, drawings and if there had been any letters concerning the duck. We showed him lots of the technical drawings, colour samples and basically every single piece of wooden duck we could find for him just to give him and idea of what they would look like.

Did you have any involvement with the product development, helping him choose the duck he would replicate?

No, not really, because he was pretty sure from the beginning he would do the version with the beak being able to go up and down and so on, so we didn’t assist in any way with the model development. We helped out a bit at the end where we did some research and some text writing for the box, and also of course provided photos from the archive and so on. But the model itself is something we weren’t a part of.