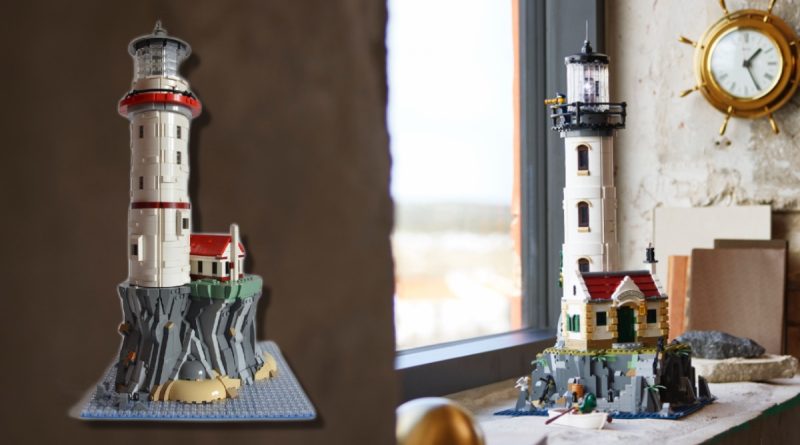 Almost every LEGO Ideas set experiences changes on its journey from the crowdsourcing platform to store shelves, but the degree to which they’re redesigned varies from product to product. Some, like 21328 Seinfeld, make it through the design process with minimal interference – while others, like 21325 Medieval Blacksmith and 21331 Sonic the Hedgehog – Green Hill Zone, are radically reimagined to make them suitable for the LEGO Group’s target audience.

Where does the newly-revealed 21335 Motorised Lighthouse fall on that spectrum? Well, beyond just the basics of the build – the finished set is assembled very differently to the original design – there are at least five major changes the LEGO Group has made to fan designer Sandro Quattrini’s product idea.

Well, technically it is – just not the shade of blue used in Quattrini’s original build. That’s because the LEGO Group has swapped out his regular blue 32×32 baseplate (covered in 1×2 trans-clear plates) for a brand new dark blue alternative, better matching the grounded colour scheme of the rest of the set. The differences between both lighthouses really do start from the ground up.

Speaking of those colours: the olive and dark greens, dark red and dark tan are all far more subdued than the vibrant red and sand green of Quattrini’s design, while the tower itself has been stripped of all colour in 21335 Motorised Lighthouse. It’s instead built entirely in black and white, with only hints of tan around its windows, and the ring of red pieces around the top platform removed altogether.

Chalk this one up to part availability: while Quattrini could only work within the confines of the current LEGO palette, the LEGO Ideas team has been able to conjure up a brand new element for 21335 Motorised Lighthouse’s Fresnel lens. It’s a great example of where the LEGO Group has the freedom and ability to go above and beyond Ideas submissions, and a change few people will likely be complaining about.

2 – It uses an extra light brick

In addition to the rotating Fresnel lens at the top of the towering structure, 21335 Motorised Lighthouse includes a second light in the building at its base. We don’t yet know if it will be powered in the same way as the main light, but regardless, it offers a welcome point of focus for the room – which might otherwise have been completely overshadowed by the lighthouse.

Despite sitting on a baseplate of equal size, Quattrini’s original submission is actually microscale, with tiny nanofigures to represent its inhabitants. The LEGO Group has designed 21335 Motorised Lighthouse to minifigure scale, however, and in the process completely rewritten the initial concept. It’s the most drastic change to the lighthouse, and therefore may also be the most polarising – but it’s impressive that the LEGO Ideas team has pulled it off so successfully within the same relative dimensions.