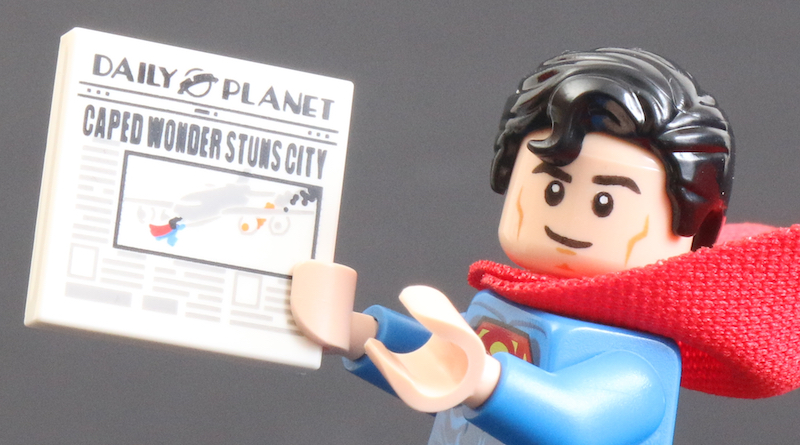 71026 DC Super Heroes Collectible Minifigures offers up a quite unique trip through DC’s 85-year history of comic books, offering up familiar heroes and villains in less-than-familiar attire and lining them up alongside some interesting, lesser known characters. Read our full review here.

The LEGO Group’s attention to detail in delivering these 16 minifigures is reflective of how truly deep they have dived into the DC canon, and whilst some references and design features may be easy to spot, others are certainly worth a second look and a greater appreciation. Here are five of our favourite references included…

Superman may be based on his 2016 DC Comics Rebirth appearance here, but the copy of Daily Planet he comes with pays tribute to one of the original versions of Superman. The headline ‘Caped Wonder Stuns City’ is directly lifted from the front page of the Daily Planet as it appeared in 1978’s Christopher Reeve Superman.

The Metropolis broadsheet’s front page in the movie marks Supes’ first appearances in public where in a busy night he rescues Lois Lane from a helicopter crash, thwarts a daring jewel thief on the side of a skyscraper, stops some fleeing robbers by delivering their boat to the police station, and saves Air Force One from disaster after it was struck by lightning. The final heroic act here has become a staple of Superman and is wonderfully captured alongside the classic headline in tiny detail on LEGO Superman’s 2×2 tile.

The original Flash, Jay Garrick, debuted in 1940, was cancelled in 1951, written off in 1956 with the creation of the new Flash Barry Allen as ‘just a character some writer dreamed up’ and written out of continuity by DC in 1985. But, each time he has managed to find himself back in the comic books, thanks to fan interest. It’s fair to say this version of the character has been through the wars, though, which makes the unusual shape of his helmet somewhat apt.

The lightning bolt and wings on his costume are inspired by the Roman god Mercury, but the metal helmet is Garrick’s father’s from WWI and in the comics has been used as a shield and a weapon.

Stargirl is a second generation hero, as the step-daughter to Pat Dugan, who as a former adult sidekick to teenage superhero the Star-Spangled Kid, developed and wore the powered armour suit S.T.R.I.P.E. Flash forward a few decades (Stargirl first appeared in 1999, whilst a Nazi-fighting Star-Spangled Kid and S.T.R.I.P.E. debuted in 1941), and Dugan’s step-daughter Courtney Whitmore discovers and dons Star-Spangled Kid’s outfit whilst her step-father reassembles S.T.R.I.P.E. to protect her. She then becomes Stargirl after joining the Justice Society of America and being given Starman Jack Knight’s magic staff.

Stargirl establishes herself as a senior member of the JSA, even though she is still a teenager. Her age is exemplified through a number of ways, including how paternal older members of the JSA such as Jay Garrick’s Flash act towards her, how her dating with Captain Marvel (also known as Shazam) is misconstrued, and the fact that she wears braces. There’s even a moment where the entire JSA accompany Stargirl to the dentist to get them removed, only for her to learn that she still has to wear them. The brace’s inclusion on one of the Stargirl minifigure’s dual sided face prints is incredibly subtle, but expertly captured.

Not easy to overlook in his minifigure form here, but how exactly did Aquaman end up with a golden harpoon in place of five left-sided digits? Primarily because the writer taking on the character in 1994, Peter David, felt obligated to do something dramatic with Arthur Currie to differentiate his work from another recent comic book series run for the character.

David’s version of Aquaman withdraws from society and grows out his beard and hair before being brought out of hiding to fight a new villain, Charybdis. Whilst he ultimately defeats him, it comes at the cost of having his left hand devoured by piranhas. After a brief run in an unfortunately-timed crossover series without a hand, Arthur first replaces it with a plain harpoon, before that is then crushed in battle. It’s at this point that, with the help of a Dr ‘please no jokes’ McCoy he attaches a golden harpoon that can respond to his thoughts, that is able to extend and detract at his will. Far-fetched? The guy can talk to fish. And, we’re not going to argue with Jason Momoa.

This is a 50-year-old Joker, returning to haunt an older Batman in the classic 1986 comic book The Dark Knight Returns. Taking on a much darker, more mature tone, this version of Gotham is on the verge of total societal collapse, with strong dystopian vibes throughout Frank Miller’s vision.

Wearing a white suit as he returns from a catatonic state, jolted by news of Bruce Wayne’s return to the streets, Joker’s actions throughout are some of his character’s most shocking, and they lead to a gruesome final confrontation with Batman at a county fair. The suit’s design in LEGO form is as minimal and haunting as it appeared on the pages of TDKR, but it’s the subtle inclusion of the candy floss that immediately takes you back to the pages of one of Joker and Batman’s most infamous meetings…

This product was provided for this feature by the LEGO Group.