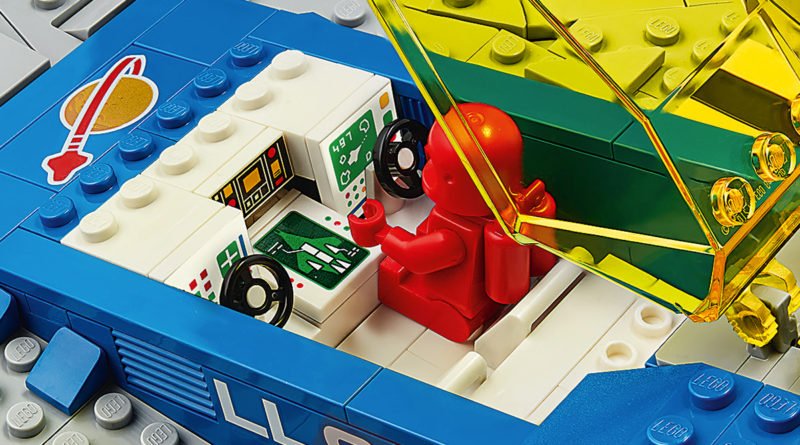 The LEGO Group’s latest Classic Space tribute comes with plenty of nods to the past.

Although the LEGO Group is no stranger to Classic Space references, 10497 is particularly impressive. The set was announced at LEGO CON and is one of several LEGO sets released in honour of the company’s 90th anniversary. It sets out to faithfully recreate 497 Galaxy Explorer (released back in 1979) albeit with a few updates on the original design. Here’s what we’ve spotted so far:

One of the main problems with recreating old LEGO sets for modern audiences is that some of the elements used back then aren’t in production any more. This requires some creative usage of contemporary pieces, and 10497 is an example of this.

While the original set used a bespoke siren element, this one uses bucket pieces to mimic the shape of this earlier element. By necessity this will be a bit more fragile than the original one was, although we don’t anticipate any major problems as a result.

497 Galaxy Explorer featured a pair of small grey rockets either side of its cockpit. The ones on 10497 Galaxy Explorer are a little bigger, and introduce a new play feature. Each one can be detached and ridden as a separate spacecraft, greatly expanding play possibilities.

Astronauts presumably want to leave their spacecraft at some point, and so 10497 Galaxy Explorer makes another tweak to the original design. It introduces an airlock which minifigures can use to safely leave the ship and explore alien worlds.

This is a shift from the original ship, which offered no thoroughfare between the ship’s cockpit and the rear compartment. That said, there doesn’t seem to be any way of preventing the air from getting sucked out when the airlock is opened.

A control panel in the spaceship shows a strangely familiar scenario: a vessel surrounded by floating asteroids. This is a clear reference to classic video game Asteroids, which – as it happens – was released in 1979, the same year as 497 Galaxy Explorer.

While LEGO isn’t afraid of referencing its own video games, it’s nice to see them take a slightly deeper dive this time around.

The robot that appears here seems to reference 6809 XT-5 and Droid, released in 1987. Impressively it also appears to be an exact replica of the robot in that set, albeit with the newer shade of grey introduced by the LEGO Group.