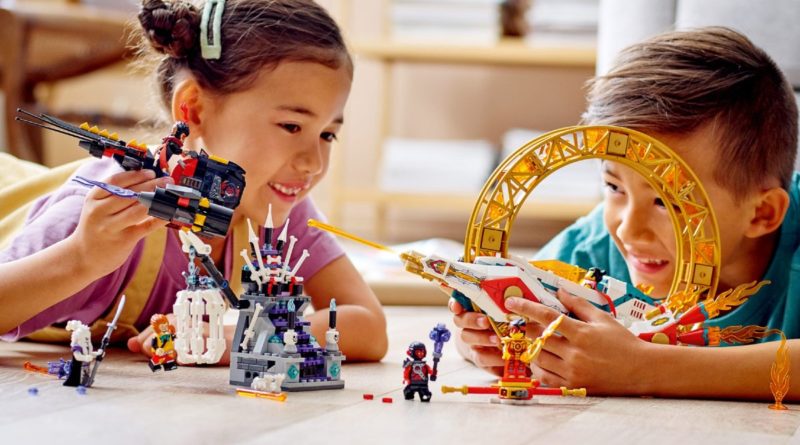 LEGO Monkie Kid will be adding seven new sets to the theme on January 1, but the upcoming models may be hiding more than meets the eye.

From a multi-storey city to a factory on the moon, LEGO Monkie Kid’s first range of builds for 2022 has been revealed on the official online store, meaning we can take a closer look at a full gallery of images for each to see what secrets they hold.

Read on below to see what we found in the LEGO Monkie Kid 2022 creations while you wait for their release on January 1, 2022.

While there are several specialised elements throughout the LEGO Monkie Kid 2022 January wave, the smallest – 80030 Monkie Kid’s Staff Creations –contains two new pieces that may find their way into other themes.

The first of these is a 2×1 brick with bars in a space between the layers that clips can attach to. In the set, this makes swapping modules onto different vehicles easy. The other brick depicts an angled segment of connections that gives the impression that the mech has knees, but appears to be unmoving in the middle.

The largest creation in the 2022 January range – 80036 The City of Lanterns – contains numerous easter eggs to other themes and sets, including a LEGO shop stocked with older models and a sign with the logo for Hero Factory.

Another build, 80032 Chang’e Moon Cake Factory features the Classic Space emblem given a makeover with a Mooncake design.

Continuing a trend from the first two years of the theme, LEGO Monkie Kid is scheduled to feature new and exclusive minifigures in 2022 with baddies, citizens and a new hero from mythology to position alongside the Monkey King.

Nezha only appears in 80034 Nezha’s Fire Ring and features a fresh hair piece with two buns as well as unique torso, leg and face printing.

From bigfig to minifigure

Sandy has also been given a makeover for the LEGO Monkie Kid 2022 sets, as two minifigures for the bigfig are featured.

Rather than using the specialised mould from builds such as 80025 Sandy’s Power Loader Mech, the LEGO Group is transforming the hero into a minifigure next year, with new legs that feature side printing to showcase the tracksuit design. It’s not yet known if this will be part of the story for the theme.

As one of the most expensive creations in LEGO Monkie Kid, it appears that the new villain for the models – Macaque – thinks 80012 Monkey King Warrior Mech has had it too good for too long.

The evil character features with his robotic armour in 80033 Evil Macaque’s Mech with a design that seems to mirror aspects of the previously released model, including the head with similar printed eyes and the two pieces sticking out of the head.