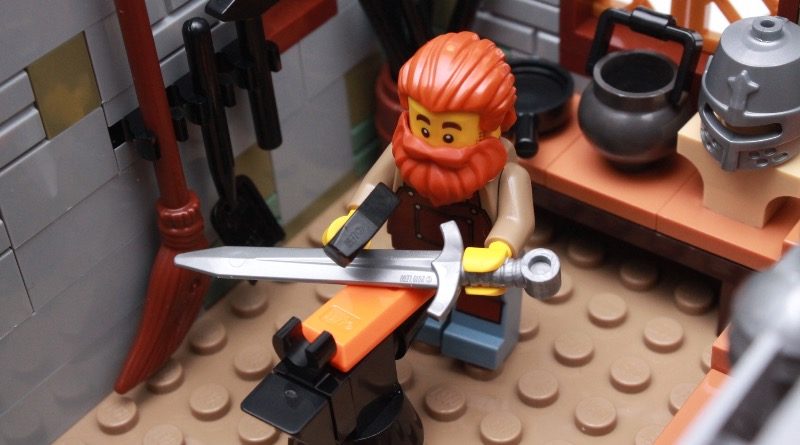 LEGO designer Wes Talbott explains how he took Clemens Fiedler’s fan design from concept to reality, and how he tried to lay the foundations for future Castle sets.

21325 Medieval Blacksmith has transported the LEGO Ideas theme back to an era of knights and fortresses, in a time when the LEGO Group’s own Castle theme is practically dormant. And we primarily have two people to thank for that: Clemens Fiedler, whose original design caught the eye of the Ideas team after reaching 10K; and Wes Talbott, who spearheaded transforming Clemens’ design from a virtual build into an official set.

Wes spoke to Brick Fanatics and select LEGO Fan Media about the set’s development process, revealing why he changed the colours of Clemens’ original design, why he added moss to the roof, and how he hopes he’s laid the groundwork for follow-up sets.

What was the research process like? Did you look at any real medieval buildings, or just go from Clemens’ design?

Wes: Yeah, I definitely took a starting point with Clemens’ [design] and then I just did a lot of research on half-timber-style buildings, just trying to get a better idea of what they’re about. I’m also interested in that stuff in my free time anyway, so I had a lot of data and images built up of other things that I was referencing.

But the core style of it was already there with Clemens – it was just a matter of tweaking a few things. I guess the major addition would be the diagonal beams and the curved beams, which I felt brought a little bit of that charm of those half-timber-style buildings.

How did you determine the scale of the set?

A lot of it just started with Clemens’ scale, really. We tried to keep it about the same size as he had in his building. But it also kind of links back to that modular idea. So when I started on this, I was thinking if this does really well – [and] I mean, this is no promise at all – but in my mind, I was thinking if this goes well, and we do some more stuff like this, how would I want that line to go?

Medieval buildings aren’t super planned out – the towns are just kind of placed wherever – [so] I felt like having a vignette base with a nice shape to it would make sense, because it also opens up freedom to make your [town] modular. I hope that a lot of people are inspired by the scale and start doing giant medieval towns. I mean, people already do [that], but in this specific modular scale would be awesome.

The blues and browns are brighter than the tones used in Clemens’ model. Why did you make that change?

One thing that I like to do a lot on models that I’m working on is [use] gradients of colour to kind of show lighting and texture. So that’s kind of the starting point that I have with that blue towards the top, where more sunlight hits, and then kind of graded down towards the bottom. I just kind of threw that in there as a flavour and I pitched it to Clemens. And he actually quite liked the gradient so I was like, ‘Alright, cool, if you’re okay with it, I’ll go with it.’

Why did you change the season the model was set in [from autumn to summer]?

I think that taps a little bit into the limitations that we run into. I really liked the fall-coloured tree that Clemens had, and I tried one, but we didn’t have a lot of existing dark red and dark orange leaves at the time. I tried one that had a lot of bright yellow, and warm yellow, because we had that from [10270 Bookshop] that we had just done. But it was so jarring that it was the only bright yellow thing that I felt like the green actually blended in more with some of the other greens that we already had in the rest of the model, and didn’t stand out too much.

Why did you decide to add the moss to the roof?

Growing up in the United States with shingled roofs, I never saw that. And then when I came here to Denmark, everyone has the tiled roofs, and whenever you’re looking to buy a house, the main thing is: don’t get the ones with moss all over them, because they’re old and they need repair. So I thought that would be a funny touch for an old building.

I had a couple different variations that I was looking into, and I ended up liking the simplicity of the plates with the studs, because I felt like it gave it a little bit of that texture of moss. That’s also the same reason that I use the 2×2 angled plate with the three studs on it, because it kind of fills in the same shape that an extra shield does, but then with a little bit of overgrowth. So that was the logic there, and then of course, the studs all across the ground link to that.

I did actually start with the whole roof being dark blue, with no moss. And then when I finished it, it just felt too clean and just a little bit too repetitive. So that’s eventually why I ended up [saying], ‘Let’s go with the moss.’ I did go back and forth a couple times on whether or not it should be there.

What were your favourite parts of the set to design?

I really enjoyed a lot of it. I think it’s really fun to take something that a fan has built, like the stone walls where it’s a lot of plate layers and stuff, and try to figure out how I can keep the texture, but put in some larger bricks that make the building experience smoother.

It’s fun to do the base layer with all the texturing and of course all the corner bricks, but also I really enjoyed figuring out how to get the angle on the roof. I didn’t want to do just a flat one, so that’s why it’s got the bend in it, along with the way the gables are placed. [That] was kind of a fun design challenge.

For more on the design process behind 21325 Medieval Blacksmith, check out why the Ideas team brought back the Black Falcons, and how they tried (and failed) to resurrect the LEGO goat.

If you’re interested in picking up the latest Ideas set, check out our review to find out why that’s a very, very good idea, then head over to LEGO.com and place your order. Doing so using our affiliate links will allow us to keep bringing you more valuable insight from the LEGO design team.