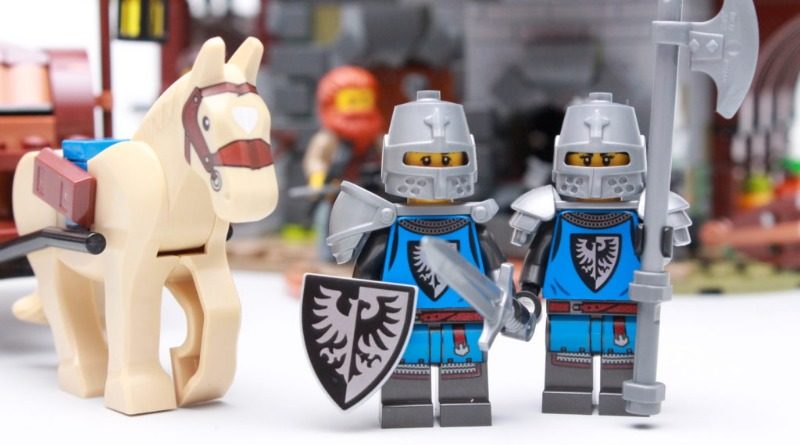 The LEGO designers behind 21325 Medieval Blacksmith have revealed why they decided to bring back Classic Castle’s Black Falcons faction.

During a recent roundtable interview with select LEGO Fan Media (including Brick Fanatics), designers Austin Carlson and Sam Johnson spoke about the decision to resurrect the Black Falcons above all other Classic Castle factions – including Forestmen, Wolfpack, Dragon Knights, Lion Knights, and… well, we could go on.

The point is that the ’80s and ’90s brought us countless Castle factions, all of which veteran fans would dearly love to see revived in the modern portfolio. So, the question is: why did the LEGO Ideas team specifically choose to bring back the Black Falcons when transforming Clemens Fiedler’s Medieval Blacksmith design into an official set?

“Outside of the Crown Lion faction, which has probably the biggest representation right now, we know in the community that the Black Falcons are probably one of the most beloved out of this series,” Austin explained. “When we started discussing it, we saw how they would work very well with the colour scheme of the Medieval Blacksmith, and we just kind of started rolling with it.

“The last time we saw anything Black Falcon-related was in [2012’s 10223 Kingdoms Joust]. So it was nice to try to actually update more of the iconic torso, because in the joust set it was just a black knight that was carried over if I remember correctly, [and he was] just given a new shield and that was it. So we decided to go in that direction to give one of the most iconic factions a revamp.”

Intriguingly, Austin also alluded to the faction’s return as a ‘business decision’. That suggests there may be more Black Falcons-themed sets on the way, allowing the LEGO Group to get more mileage out of the designs created for 21325 Medieval Blacksmith. But even if this is their only appearance for the foreseeable future, Sam revealed that the team didn’t have to start from scratch with the much-loved knights, as Austin was apparently already well-prepared for their return.

“I think it’s funny working with Austin as well when I say, ‘Hey, we’re going to make a castle-themed set,’ and within about half an hour he has a whole bank of characters open that he’s already spent months and months working on,” Sam said. “If you can name a character, he’s probably already done it and will probably release it in about 15 years.”

Here’s hoping we don’t have to wait 15 years for another Black Falcons set. But just in case we do, read our in-depth review of 21325 Medieval Blacksmith, order the magnificent model from LEGO.com, then join us in dreaming up new ways Classic Castle could return.