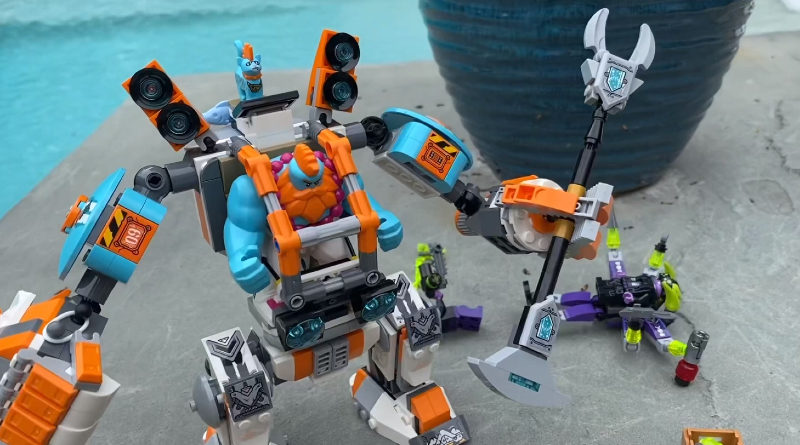 Another of Monkie Kid’s unique mech models will soon be hitting shelves but before that, the first look at LEGO 80025 Sandy’s Power Loader Mech is now available.

Sandy, the gentle giant and keen inventor of the Monkie Kid team is back with his second vehicle for the theme as the bigfig character ventures from sea to land in an enlarged mech build. Masters of Brickjitzu has received the summer set ahead of release, bringing us the initial showcase of features, minifigures and more.

Clocking in at 520 pieces, 80025 Sandy’s Power Loader Mech is bigger, yet cheaper than 80014 Sandy’s Speedboat and comes with two main functions – one for each brick-built hand. As the YouTuber demonstrates, the left arm operates a spinning staff with the other enforcing justice through a powerful punch. Overall, the battle seems slightly one-sided.

Unlike the other Monkie Kid summer sets, 80025 Sandy’s Power Loader Mech comes with no new characters but if you’ve been missing the largest member of the crew, then it has you covered.

“Overall this mech is fantastic, for $55 it’s a little steep not gonna lie,” the YouTuber comments. “I kind of wish this set was a bit bigger and the spider mech was a little bit more drawn out, but overall this set is really great.”

LEGO 80025 Sandy’s Power Loader Mech will release on July 1 alongside a record-breaking LEGO model which you can get a first look at here.