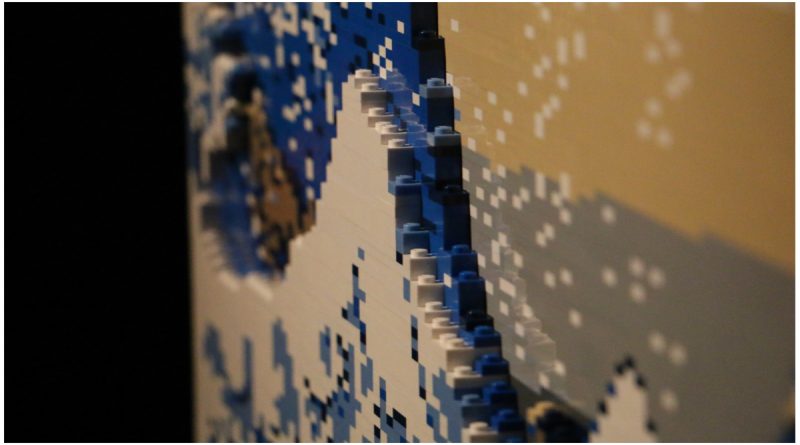 There’s rumoured LEGO Art set coming in 2023 of The Great Wave off Kanagawa, but it’s not the first time it’s been done.

The Great Wave off Kanagawa, created as a woodblock print in 1831 by the artist Hokusai is one of the most famous pieces of Japanese art. The rumour mill suggests that, in the footsteps of the Ideas set, 21333 Vincent van Gogh – The Starry Night, The Great Wave will also be replicated as a LEGO set. This time, however, it’s likely to be as part of the Art theme, rather than Ideas.

What it will be – if indeed it’s created at all – remains to be seen. Thus far, the Art theme has been strictly 2D, while the van Gogh set took the leap into the third dimension, extending out of the frame and bring the artist’s brush strokes to life.

But there is a precedent for The Great Wave in LEGO form. A few years ago, renowned lawyer-turned-LEGO-artist, Nathan Sawaya toured his ‘The Art of The Brick’ collection around the globe. As well as some of his most famous works, such as Yellow – a surreal and slightly disturbing sculpture of a man, ripping his chest open and spilling a pile of yellow LEGO bricks out – he tackled a number of famous art works.

These included sculptures such as Michelangelo’s David, Winged Victory of Samothrace and Rodin’s ‘The Thinker’. Elsewhere he took on a number of famous paintings, such as Girl With a Pearl Earring, The Scream, Monet’s ‘San Giorgio Maggiore at Dusk’ and, of course, The Great Wave.

While appearing to be a flat mosaic at first glance, on closer inspection it’s revealed that it is – just – three dimensional, as the waves extend out from the surface, but only by the depth of a brick or two. How the LEGO designers will choose to approach this set, if indeed they do – still just a rumour, remember, will be interesting. A display set to sit on a shelf, or a replica of a great work of art to be hung on the wall. Only time will tell.

If you’d like to buy some LEGO, then please consider using our affiliate links – every purchase helps to keep Brick Fanatics running. Thanks.