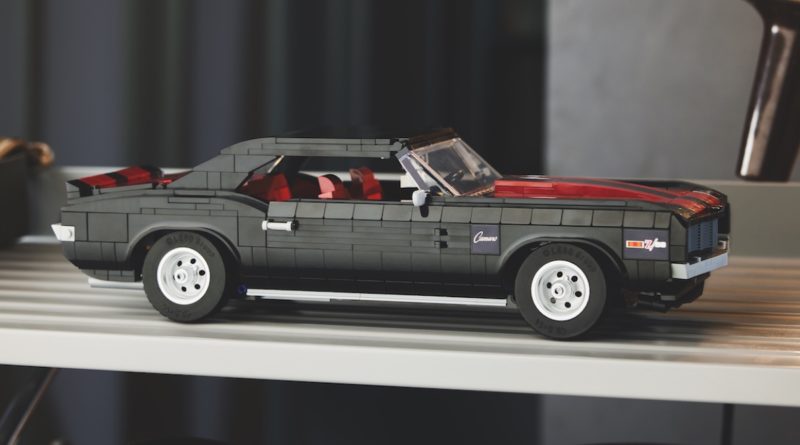 The latest LEGO ICONS vehicle racing on to shelves is 10304 Chevrolet Camaro Z28, a customisable recreation of the 1969 muscle car.

Decked out in black (the LEGO Group calls it ‘gloss black’, but it’s… black) with options for three different colours of racing stripes – red, white or grey – 10304 Chevrolet Camaro Z28 takes the 2-in-1 approach of 10295 Porsche 911 and dials it up to 11. Like that classic white roadster, the Chevy can also be built as a hard top or convertible, and there are even two different options for headlights.

It also follows in the tyre tracks of previous LEGO ICONS vehicles, like 10265 Ford Mustang, by packing in working steering and opening doors, though that’s pretty much the extent of its functionality. The press release also points to an ‘intensely detailed engine’ under its list of ‘functional elements’, but if it’s anything like the Mustang’s (for example), it will only be for show.

We’re referencing the Mustang here deliberately, because that 2019 set is perhaps the closest companion piece to 10304 Chevrolet Camaro Z28. They’re both 1960s muscle cars with racing stripes, after all, and they even have very similar piece counts: 10265 Ford Mustang comes in at 1,471 parts, while 10304 Chevrolet Camaro Z28 uses a total of 1,456 pieces. In the real world, the 1969 Z28 model was considered a direct competitor for the 302 Boss Mustang in the Trans-Am Series.

“The 1969 Camaro Z28 has been turning heads on and off the roads for decades, which is why we are so proud to see it come to life in a brand new way via LEGO bricks,” said Chevrolet Camaro Product Marketing Manager Harlan Charles. “Anyone who loves the iconic design of the 1969 Camaro Z28 now has the thrill of building this set and displaying it in their home.”

The Z28 was originally conceived as a ‘virtually race-ready’ variant of the first-generation Camaro, sporting a V8 engine, upgraded suspension, a four-speed manual transmission and power brakes. Just 602 Z28s found their way into the hands of automotive enthusiasts in 1967 – it wasn’t widely advertised alongside the standard Camaro – so the real deal now sells for as much as £185,000. Thankfully, the LEGO version comes in quite a bit cheaper at £149.99 / $169.99 / €169.99.

“With its classic lines and sleek design, the 1969 Camaro Z28 is unrivalled in its elegance – which is why it was such a wonderful inspiration for this LEGO design,” said LEGO designer Sven Franic. “By building this set, you can envision yourself at the wheel, and all but feel the rumble of the engine taking you down an open road.”