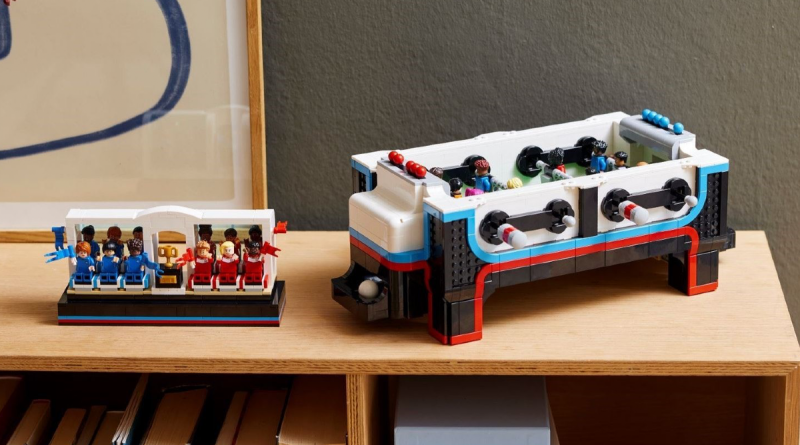 21337 Table Football ­– the latest set in the LEGO Ideas theme – might prove a hard sell when compared to non-LEGO versions.

The LEGO Ideas theme allows LEGO fans to submit their own set designs, which (with luck) will be turned into official LEGO products. 21337 Table Football is the latest one to join the theme, with the original design produced by one Donát Fehérvári.

That size appears designed to aid portability and stability (as larger models proved too flimsy in LEGO form) but it’s hard to overlook that you’re spending a lot of money for a relatively small model. In many respects that’s par for the course when it comes to modern LEGO sets. But many LEGO sets don’t have a direct analogue in non-LEGO products. 21337 Table Football clearly does, which puts it at something of a disadvantage.

We don’t tend to make these kinds of comparisons at Brick Fanatics, but with a set like 21337 Table Football such comparisons are inevitable. And this question of value is a question that potential buyers of the set are likely to ask.

So what exactly is 21337 Table Football competing with? If we’re looking for something that’s relatively portable, the Chad Valley Table Top Football Table seems like an obvious substitute. It’s 50.5cm long, 31.5cm wide and 10cm deep, so it’s roughly the same size as the LEGO version.

It also features six players on each team (as opposed to the LEGO table’s five) and, most damningly, costs just £20. That said, despite largely positive reviews, its Argos product listing does mention some flimsy construction. That’s something the LEGO table can’t be accused of, based on what we know about the design process.

To take another angle, how big a table football set can you get for the LEGO version’s RRP? A product that gets you close to that price (at least within the UK) is the Riley Folding Football Table. Setting you back about £187, the table measures 121cm long, 66cm wide and 88cm high. It boasts eleven players on each team, and the entire table can fold upwards for easy storage. However, assembly of the table is reportedly a little laborious.

Of course, there are several other table football sets to choose from, with a variety of prices, sizes and build qualities to consider. As such, while it’s difficult to make a direct comparison to the LEGO version, the wide availability of table football toys (at multiple sizes and price points) might make 21337 Table Football a tough sell. Particularly as, unlikely several LEGO Ideas sets, it’s designed as a toy first and foremost.