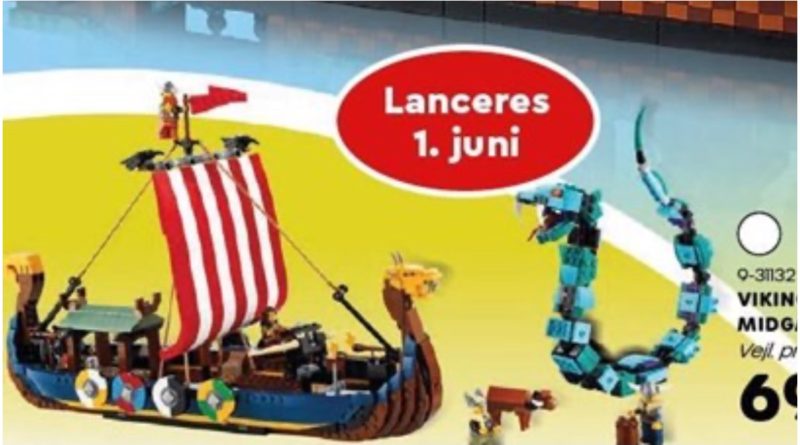 A Danish toy catalogue has given us our first glimpse at a new LEGO Viking set, which will probably appear in the Creator 3-in-1 line.

31132 Viking Ship and the Midgard Serpent – as its Danish names translates to English – is a highly anticipated addition to the LEGO lineup. The product shot (which can be found on page 49 of this toy catalogue) comes with everything you’d expect: a long ship with a detailed masthead, a large sail and round shields on the sides. It also appears to come with four Viking sailors, some kind of bovine creature and the Midgard Serpent itself.

While the LEGO Group has explored this subject matter before, it’s been a long time since they did so. A dedicated Vikings theme was produced during 2005 and 2006, featuring many mythical creatures from Norse mythology. This new set is essentially a do-over of 7018 Viking Ship Challenges the Midgard Serpent, albeit with more sophisticated building methods this time around.

More recently, 76208 The Goat Boat has been announced for the LEGO Marvel line. While this features the same basic design as this new model, the latter’s more grounded design may prove more attractive.

If this catalogue is to be believed, 31132 Viking Ship and the Midgard Serpent is due to appear on shelves on June 1 this year. The given RRP of 900 DKK is equivalent to about £100, bringing the set in line with other Creator models such as 31109 Pirate Ship. It’s possible the UK price will be different, though.

With luck we’ll get more information from the LEGO Group soon, including more product shots, any alternate builds and a price for UK buyers.