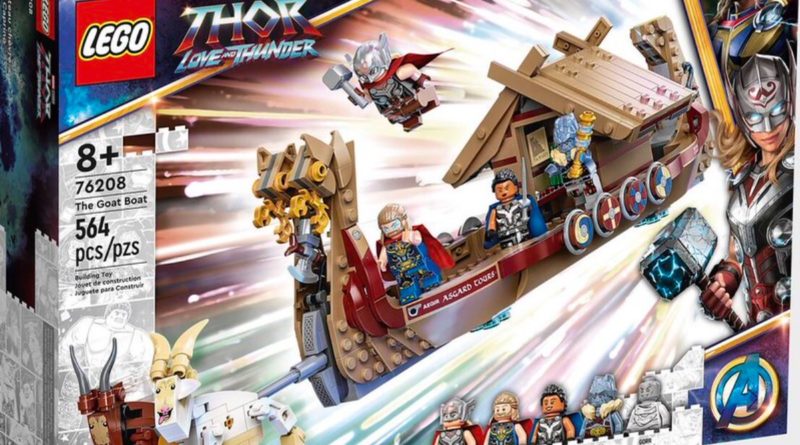 The LEGO Group has unveiled the gloriously-named 76208 The Goat Boat, its first set based on Marvel’s Thor: Love and Thunder.

The superhero set originally showed up on the building instructions portal earlier today, and right on cue, it’s just popped up on LEGO.com – confirming its rumoured price and piece count, as well as its release date.

Coming in at 564 pieces for £44.99 / $49.99 / €49.99, the first of at least two LEGO Marvel sets based on Taika Waititi’s upcoming sequel includes minifigures of Thor, Mighty Thor, Valkyrie, Korg and Gorr. The designs for both Thor and Jane Foster (or Mighty Thor) match those we’ve already seen for the movie through SH Figuarts’ action figures.

As expected, the eponymous animals pulling Thor’s longship are indeed brick-built. That means we’re still waiting on the return of the minifigure-scale goat mould, which is unfortunately unlikely to be among this summer’s rumoured LEGO CITY farm sets.

In the absence of a first trailer for Thor: Love and Thunder, this is also technically one of our first official glimpses at this summer’s MCU sequel, which will arrive in cinemas on July 8. With the marketing campaign clearly now kicking into gear, though, we wouldn’t be surprised to see a first full trailer sometime this week.

76208 The Goat Boat will be available to buy from LEGO.com, LEGO Stores and all good retailers from April 26, 2022. That’s just a few days ahead of the premiere of the next MCU film, Doctor Strange in the Multiverse of Madness. That movie’s only tie-in set, 76205 Gargantos Showdown, is available to buy now.