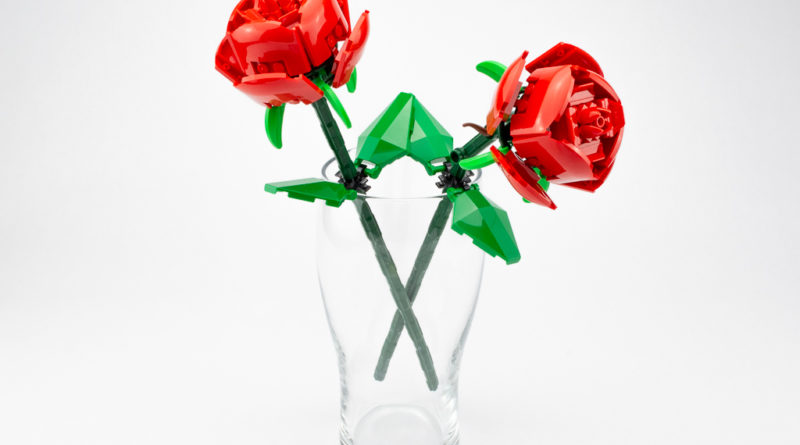 With sales of the LEGO Group’s recent adult-orientated Botanical Collection blooming, we take a closer look at 40460 Roses to see whether it’s the best of the bunch or one flower too many.

10280 Flower Bouquet already includes a handful of roses, but they’re in the LEGO Group’s comparatively rare light nougat colour (you can find out why by clicking here). 40460 Roses serves up a pair of the popular flowers in a far more traditional red, positioning them squarely in romantic gift territory.

Houses, vehicles, buildings, photo frames, mosaics – all of these are easily created in LEGO form (albeit with varying degrees of success), because they’re predominantly square in structure and largely based on man-made creations.

Flowers, on the other hand, form part of that large collective of organic materials that are simply a lot harder to recreate accurately with everybody’s favourite plastic brick.

The build begins by attaching two of the new dark green Technic steering wheels together (we’re provided with four in this set) and a combination of red brackets to create a square studs-out wall. The bud, made up of red tooth plates pointing upwards, is placed in the middle on the 2×2 jumper plate stud and rotated 45 degrees to create a satisfying diagonal offset.

The next step requires clipping on four car bonnets to the steering wheel, which then fold up to create another outer wall of petals. It’s at this stage that the rose really reveals itself, with the design seemingly simple, but highly effective in conveying the subject matter.

Another group of ‘petals’ are attached to the second steering wheel as well as bright green blades/claws for the downwards-facing sepals. This step was actually a little more fiddly than expected as the blades are required to line up between the gaps in the petals as well as the space on the steering wheel. It’s also rather easy to knock pieces off whilst attaching others, so it’s worth taking a bit of extra care to avoid undue frustration.

With both rose heads completed it’s simply a matter of joining the dark green Technic connectors to create a long, strong and supportive flower stem. Whilst the heads are both identical, the stems differ slightly from one model to the next with thorns and an angled portion of stem only appearing on one.

The final step is simply attaching the ‘leaves’ (6x4x1 windscreen panels in green for the first time) to the four-clip Technic pin connector for the finishing touch.

The flowers are beautifully constructed and the dark green stems might be far sturdier than their real-life counterpart, but they do allow the roses to be displayed very nicely in any upright container without worrying about the eventual wilting. They can be modified easily to adjust to the desired height too, though extra pieces are required if super-tall roses are the goal.

Sorry, this set is all about the flowers. No minifigures are included.

When considering fairness of price, you usually need to take into consideration a number of factors such as quantity of pieces included, minifigures (if any), inclusion of specialist pieces (lights/power functions) and whether there’s a premium price hike from an attached IP licence.

This is a straightforward non-licensed LEGO set, and 120 pieces (albeit including some nice, new re-colours) seems a little pricey for £11.99. It’s certainly not astronomical, but given the lack of licence, minifigures and half the amount of pieces as the excellent 40462 Valentine’s Brown Bear (reviewed here) that was only £2 more, it seems a little steep.

If this was a couple of pounds cheaper it would be a little more reasonable, but given how challenging this set is to get hold of at the moment, price clearly hasn’t affected sales.

Flora and fauna are no strangers to the LEGO world, and though we’ve had a few flower-themed sets over the years, we’ve not really seen the same approach to realism that the LEGO Group has taken in its 2021 botanical range so far.

40460 Roses is an aesthetically-pleasing set that isn’t too harsh on the wallet and can be built within a short timeframe, providing the owner with a well-designed and very displayable model at the end.

The decision to release red-coloured roses and not the fleshy pink found in 10280 Flower Bouquet was a wise move by the LEGO Group, as it allows it to serve as an expansion pack for those wanting to add more colour to their brick-built bunch. It’s also arguably far more appealing in red as a standalone set – especially as a romantic or thoughtful gift.

Overall, there are no real complaints here. It might have been nice to have a bigger set with a dozen red roses, but with two you get the idea, and if that’s not enough there’s always the aformentioned bouquet set or 40461 Tulips, which also pairs nicely (as seen in the photo below).

If you can get your hands on it, it’s unlikely to be a regrettable purchase and, more importantly, it might be a good way to finally get your mum hooked on LEGO.