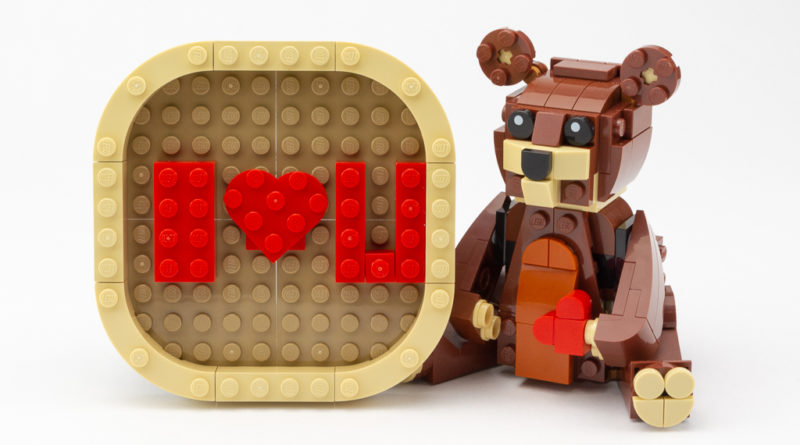 LEGO Seasonal 40462 Valentine’s Brown Bear is here just in time for Valentine’s Day – but is it the perfect gift for a LEGO-loving loved one, or is it bear-ly worth your consideration?

With the new year comes new LEGO sets, and within that umbrella come the often lesser-mentioned – but just as sought-after – sets from the Seasonal theme. 40462 Valentine’s Brown Bear is one of this year’s romantic offerings, following in the same bear-shaped paw prints as 2020’s 40379 Valentine’s Bear.

Considering this set is among the pocket money-priced options from the LEGO Group’s portfolio, next to the myriad more expensive and time-consuming models available it’s still a surprisingly involved build with a much higher piece count than you might expect from photos alone.

The build is divided into two parts, the first being the construction of the base before concluding with the bear itself. The base is a straightforward build with curved plates in dark tan outlined in curved tan bricks for height. In the middle can be found a few red bricks (including a 3×3 heart-shaped plate) that not only lend additional structural support, but romantically spell out “I (Heart) U” in the process.

It’s a fun little touch by the designer, though a shame when you realise it’s not intended to be seen past this building step upon completion. It calls to mind a similarly hidden lettering pattern in the Modular Buildings Collection classic 10243 Parisian Restaurant, where plates spelling out the word ‘Chez’ can be found underneath the front seating area.

Once the green curved plates are down, a simple but effective picnic blanket made up of blue and white 2×2 tiles covers most of the top, with the addition of a few flowers and a trio of ‘floating’ brick-built red hearts to really hammer home just what the set is about. It’s unclear whether they’re meant to be helium balloons or not, but the use of trans-clear antenna pieces and 1×1 round plates as ‘invisible’ supports suggests that love is in the air regardless.

Although the exterior of Mr. Bear appears to be fairly plain and simple, the build on the inside is a lot more colourful. A variety of brackets and SNOT building techniques provide the structural foundation for our furry friend, with some clever design work on the outside ensuring a smooth and mostly studless finish. There’s some nice part usage for the tail, which uses a brown whipped ice cream piece, but the black jumper plate instead of one in a matching colour feels odd. At least it’s an easy swap for most builders, should they wish to make the change.

The legs are constructed with a combination of brown slopes and arches, along with tan tiles for the paws, and attached via clips to give them a little articulation. The arms look great and are movable too, but due to the use of a 2×2 turntable, they simply give in to gravity and remain tucked close to the bear’s belly.

The little brick-built heart held by the paw is a perfect example of how few pieces are sometimes required to represent something so accurately. (Not anatomically, mind. But you know what we mean.)

The head is built in a very similar manner to how the BrickHeadz are constructed with smooth curved sides, but instead of a flat face, the nose and mouth protrude, helping it achieve an overall more aesthetically pleasing result. Pop him on the turntable on the base and you have a lovely Valentine’s display ready for show.

Although a minifigure included with this set could be amusing considering the scale of it next to the bear, the theme is not intended to be scary. (It’s Valentine’s Day, after all.)

No minifigures are included here.

40462 Valentine’s Brown Bear comes in at a reasonable price, especially when considering the price-per-piece ratio. Seasonal sets seem to be increasing in price (and size) year-on-year, and whilst previously this might have been closer to £9.99, most consumers would be willing to pay full price without too much of a grumble. At £13.49, it feels about right.

It’s hard not to judge a LEGO set by its box art, and 40462 Valentine’s Brown Bear‘s isn’t too impressive. Whether it was the clashing red and pink colours of the artwork or the bear itself, something didn’t sit well with us.

Having now built it, we’re pleased to report that it’s a rather satisfying construction, and the bear is far more appealing in the brick than on the photos. It feels like a more substantial (and suitably displayable) model with the addition of a base, too – though the extra parts required explain the marginal price increase.

On the downside, the red brick-built hearts are a little easy to accidentally knock off due to the antenna supports, and it’s odd the head doesn’t turn given the legs and arms can move freely. It also seems a shame that the top of the base can’t be removed quickly to reveal the hidden Valentine’s message or act as a little hidey-hole for an engagement ring or jewellery.

Luckily for fans of LEGO that don’t really buy into the February 14 tradition, this set can just as easily be modified to remove any Valentine’s connections, making for just a lovely little LEGO model of a bear, as seen in the photos below. Removing all the hearts and adding the bee and honey pot from 40379 Valentine’s Bear works surprisingly well!

All in all, it’s still a well-executed model at a low price point. For collectors of Seasonal sets, it might just be the perfect display companion to last year’s 40379 Valentine’s Bear. And if this is for your loved ones, whether they’re into LEGO or not, it would no doubt be well-received as a romantic Valentine’s gift with a blocky twist.