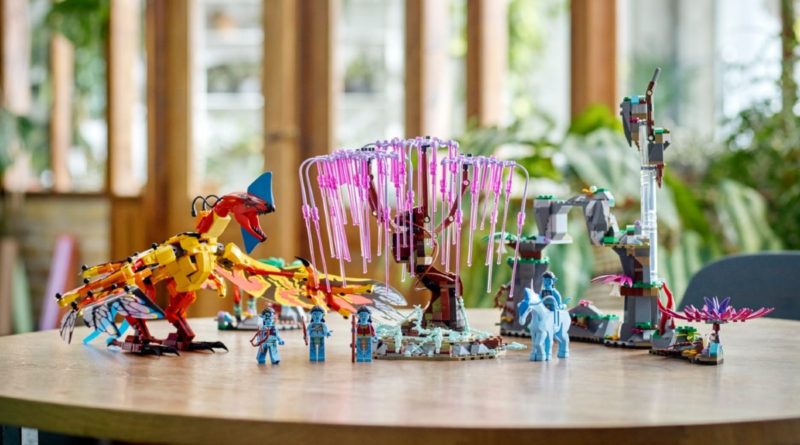 A major release in the LEGO Avatar line – 75574 Toruk Makto & Tree of Souls – can now be pre-ordered directly from the official LEGO site.

Avatar – directed by James Cameron – was a massive movie hit in 2009. It tells the story of an alien race called the Na’vi, who must defend their world of Pandora from human interlopers.

The movie went on to become one of the highest-grossing movies ever released, and 2022 will see a sequel appear in cinemas. In honour of the occasion the LEGO Group has announced a new line of LEGO Avatar sets, which take inspiration from the original movie. LEGO sets inspired by Avatar: The Way of Water (the sequel to the original) seem likely to appear in 2023.

While these initial sets aren’t due to be released until October 1, the largest of these can now be pre-ordered from LEGO.com. 75574 Toruk Makto & Tree of Souls recreates a pivotal location in the first Avatar movie. It includes an alien tree, a chunk of terrain from the planet Pandora, and the toruk– a massive winged alien creature. The phrase ‘toruk makto’ refers to a Na’vi who can ride a toruk successfully.

As such, four Na’vi minifigures are also included. They are differentiated from other LEGO minifigures by their use of longer limbs, which first appeared in the LEGO Toy Story theme several years ago.

Pre-ordering the set ensures you’ll receive it upon its release; although Avatar hasn’t made a massive pop culture splash, we suspect its LEGO sets could prove popular. Moreover – while the set has been available for pre-order from Zavvi – you’ll receive a significant quantity of LEGO VIP points if you buy it here. And with Black Friday on the horizon, we’ll need all the VIP points we can get.

75574 Toruk Makto & Tree of Souls costs £129.99 / $149.99 / €149.99. It’s currently available for pre-order in all three of these territories, although this could change closer to the set’s release date. You can learn more about the other LEGO Avatar sets in our SDCC report from earlier this year.