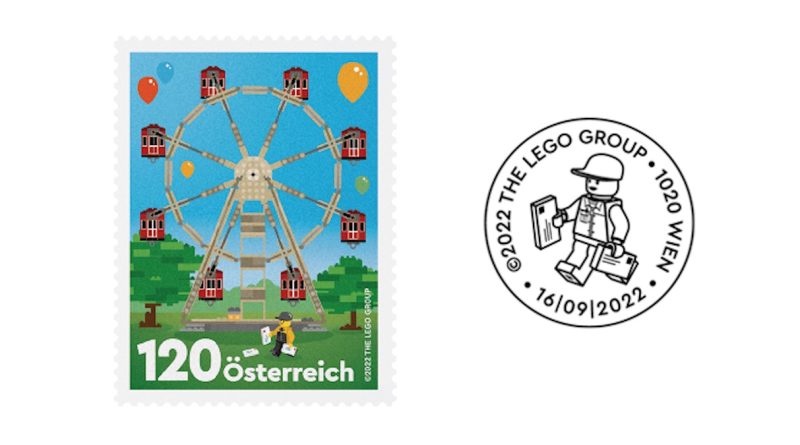 A unique commemorative stamp has been created by the Austrian Post service to celebrate the LEGO Group’s 90th anniversary.

Although the main focus of the LEGO Group’s 90th anniversary celebrations took place on or around August 10, additional promotional items have continued to pop up to mark the event. These have included a 90 Years of Play Timeline board game employee gift, a rare metal keychain in Korea and a LEGO Mini Castle available in the US at Walmart.

Added to this ever-growing list is a new commemorative stamp that will be issued by the Austrian Post service from September 16. The design of the stamp features a recreation of the Vienna Ferris Wheel as a LEGO model, with a minifigure holding letters. The same minifigure will also appear as part of a celebratory LEGO postal mark which includes the stamp’s issue date.

Only 450,000 sheets containing 10 x 90th anniversary stamps each will be issued, priced at €1.20 each. The Vienna Ferris Wheel is also celebrating its own 125th birthday this year, with a special Post Office appearing next to the real-life attraction.

31119 Ferris Wheel is now sold out in the UK and Europe and listed as temporarily out of stock in the US. Whether a new and potentially larger such LEGO attraction will appear at some point in the future is not yet known. However, if the recent release of 10303 Loop Coaster gives us anything to go by, we know that updated and upgraded LEGO fairground models are certainly a possibility.