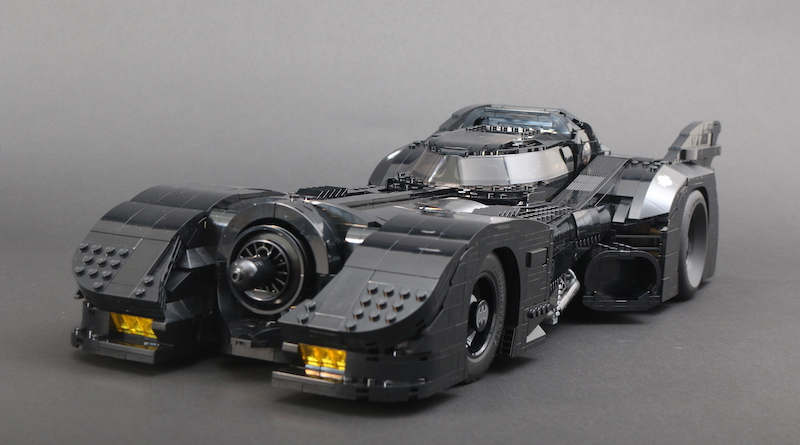 2019 is the year of the Batmobile, it seems. Whilst it serves as a nice reminder of one of the LEGO Group’s occasional quirks as a company, it certainly remains unusual to see three released in quick succession, even if this is the 80th anniversary of Batman (which is also the 80th anniversary of the Batmobile). There’s definitely a debate to be had about the similarities between 76119 Batmobile: Pursuit of the Joker and upcoming promotional release 40433 1989 Batmobile, and most pertinently whether the amount of money required to get the latter will be worth it*. However, the most die-hard LEGO Batman fans won’t be complaining, and few should be pulling 76139 1989 Batmobile into the discussion. Indeed, for its larger scale and price point and again the potential that such factors unlock for LEGO designers, there’s no comparison.

Larger scale display models like this may not be to everyone’s liking, but, 76139 1989 Batmobile does everything in its power and its 3306 pieces to tempt every LEGO fan and Batman fan. 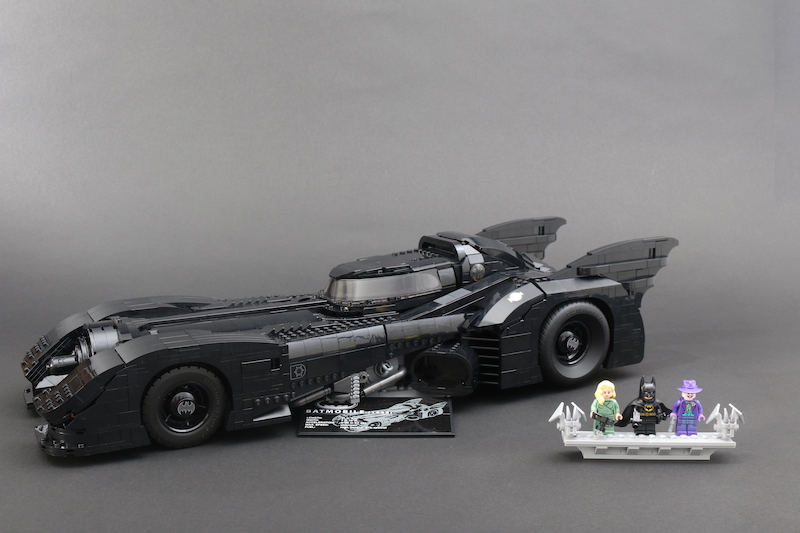 The 1989 Batmobile sits as one of modern film’s most unique and iconic vehicles, from the distinctive jet engine turbine for a nose, and the low-angled deep-set canopy, to the smooth curves along a ludicrously long body that shape up into batwing-shaped fins, with everything coated in a thick, dark black. Nothing before on film has ever looked like this, and very little has come close in the three decades since.

This car has oozed appeal since its screen debut 30 years ago and continues to this day to attract new fans, including those with a love of LEGO. A quick search through Flickr is as sure a demonstration as any as to the particular and continued draw that it has to aspiring builders. Many a LEGO fan has attempted to capture the complex curves of the 1989 Batmobile, to various scales and various degrees of success.

So, how, does the LEGO Group’s first official venture into recreating the 1989 Batmobile shape up? As you’d expect in this current era of large-scale amazing LEGO sets, where budget and piece count are secondary to the creative whims of LEGO designers. 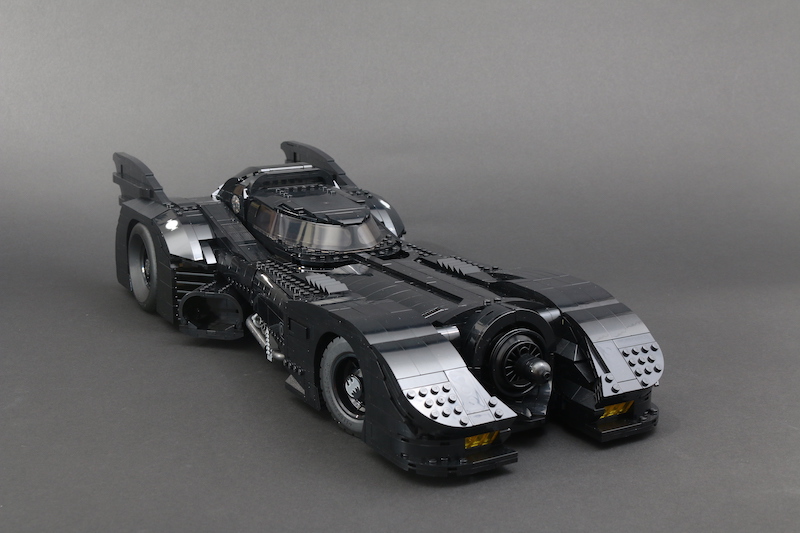 Everything that defines the look and attitude of the vehicle in real life and on screen is so brilliantly captured in 76139 1989 Batmobile, built at a larger-than-minifigure scale (the same scale as 2014’s 76023 The Tumbler). This is a LEGO set that looks the part in every way, capturing the sleek lines and subtle curves that shape such a unique, long frame, whilst just as importantly exuding that same dark, awesome attitude.

And at the same time it is a model that in almost every step of construction just makes sense. Of course those curved bricks have been used there, of course that’s how the steering and internal mechanism has been created, of course the bodywork has been angled that way using clips and bars, and why wouldn’t the seating for the cockpit be built into the chassis like that? For the most part, this is a build that doesn’t look to re-write the rulebook but rather just remind you of how smart the LEGO system can be, and how adaptive to different angles and directions of build it really is. Until you get to the cockpit, that is. More on that later. 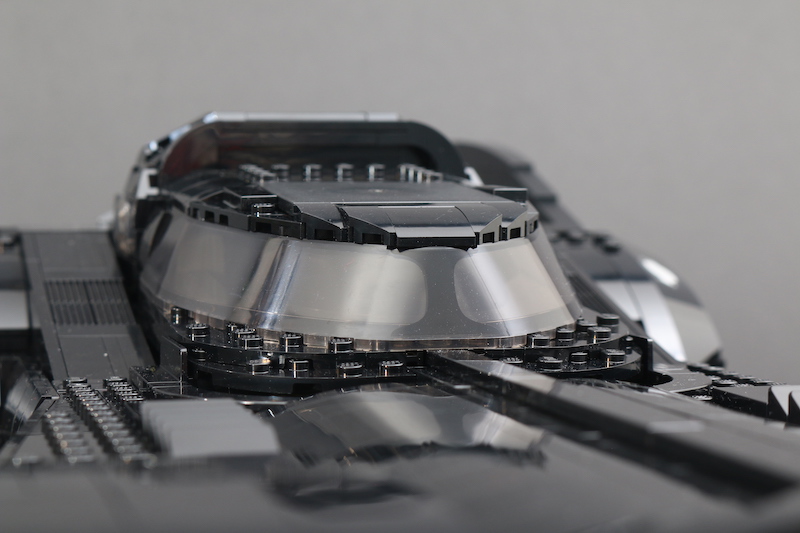 The build comes together rather quickly, for a set of this size, but that’s not to say it is dull or easy. For how the vehicle takes shape, there are several moments in putting the model together that Bat-fans will definitely enjoy, particularly in the latter half of the build as various parts to the bodywork take form. This a vehicle that has so many awesome angles to look at it from, and the build celebrates that in a very appreciative way, allowing you to complete aspects to the car stage by stage.

The completed model is something to behold and truly from any direction, with turntable display stand to sit it on reminiscent of the Batcave’s turntable for the Batmobile. At over 3.5kg it is no lightweight and it’s certainly not a delicate build with pieces liable to fly off if you drive it around. In taking in the final model, it’s remarkable for how sleek and fluid construction is, especially when considering that it was designed primarily by three LEGO designers, each working to specific parts of the vehicle.

Such is their attention to detail and to the chosen build scale, though, their combined expertise helps elevate every aspect of 76139 1989 Batmobile, meaning focus isn’t so much on how cohesive it is, but rather on the fact it’s just so cool. A lazy adjective, perhaps, but, the Batmobile has always been the embodiment of everything about Batman that is just so cool, and, it is all present in this 3,306-piece LEGO set – as mentioned above, this model captures not only the detail and the angles, but the attitude and essence. You feel the same way looking at this as you did when first taking in the 1989 Batmobile on screen. 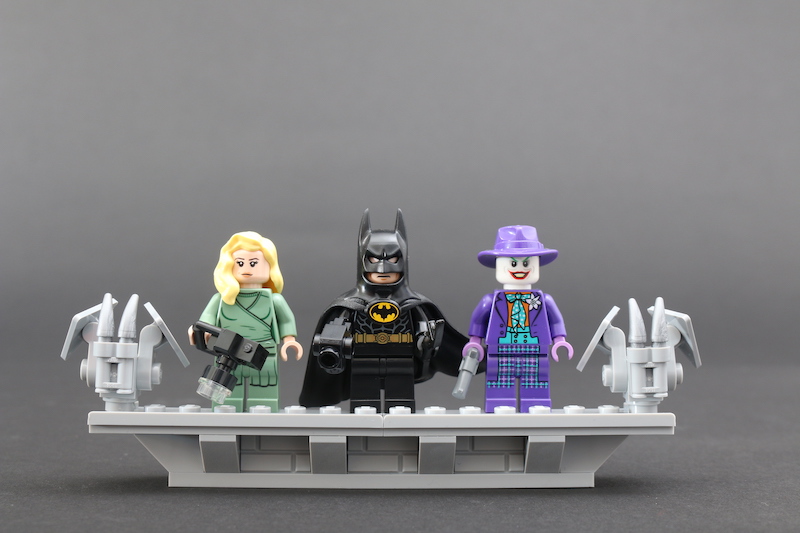 That emotional reaction is extended to the trio of minifigures included too, thanks primarily to the rubber-style cowl that has been exclusively designed for 76139 1989 Batmobile’s Batman. These are three minifigures worthy of any LEGO Batman fan’s collection and certainly worthy of more detailed appreciation and photography, so have a look at our Minifigure Focus.

Elsewhere, play functions are as you’d hope for a build of this size and detail – only relevant and smart. In other words, there are few to be had, but each adds a value that is aesthetic, more so than play-based. The first requires you to remove a panel from each fender and then twist the rear-mounted afterburner clockwise to push up the two decorative M1919 Browning machine guns.

Meanwhile, the front wheels can be turned by the cockpit’s steering wheel, albeit only to a limited degree, most likely because of the ridiculously long wheelbase that this vehicle has. The third and most notable play function is in how the cockpit opens. It’s only attached via some Technic tiles that slide along a couple of long Technic axles, but, the build around this simple technique is masterful, both for how it functions and how it allows a crucial detail to the shaping and angle of the cockpit to be achieved. 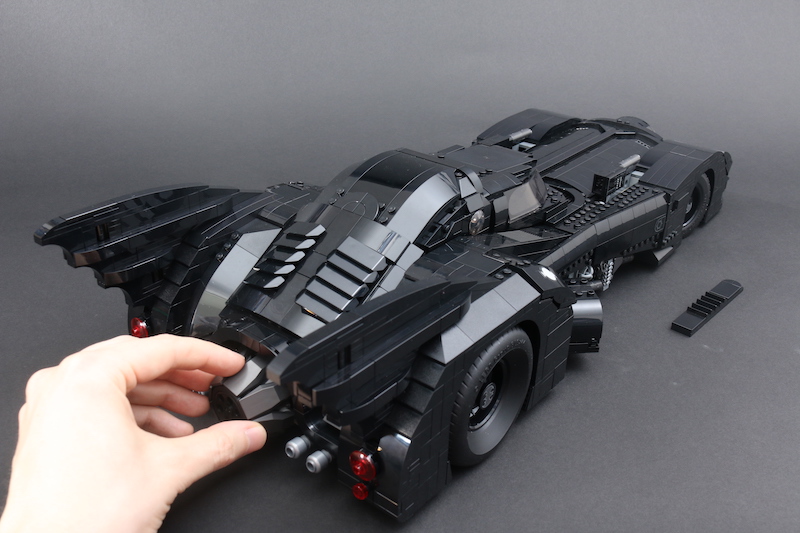 Indeed, the design team’s attention to the reference material is best felt in this. The canopy may appear at first glance to rely on the specially moulded windshield piece for appearance, but, as Element Designer Jaime Sanchez Potter points out in the set’s instruction manual, its design is just as important in function. It opens and closes in a self-supporting system, but as a build there is something far more important at play, achieved thanks to how the canopy otherwise falls into place.

The LEGO Group could have easily settled for a cockpit that just opens and closes on a sliding function that moves purely along the horizontal axis, but importantly, they have put the time and expertise into perfectly capturing that most subtle of angle changes that the real Batmobile has. When closed, the canopy isn’t attached via anything other than the Technic tiles and axles, yet it perfectly slides into position, with an all-important, ever-so-slight drop down at the front end. It’s hard to compare with anything most LEGO builders will have experienced in a LEGO set before, and, for where your eyes are most immediately drawn and for the extra level of authenticity and character that it gives the model, it’s a most appreciated detail. 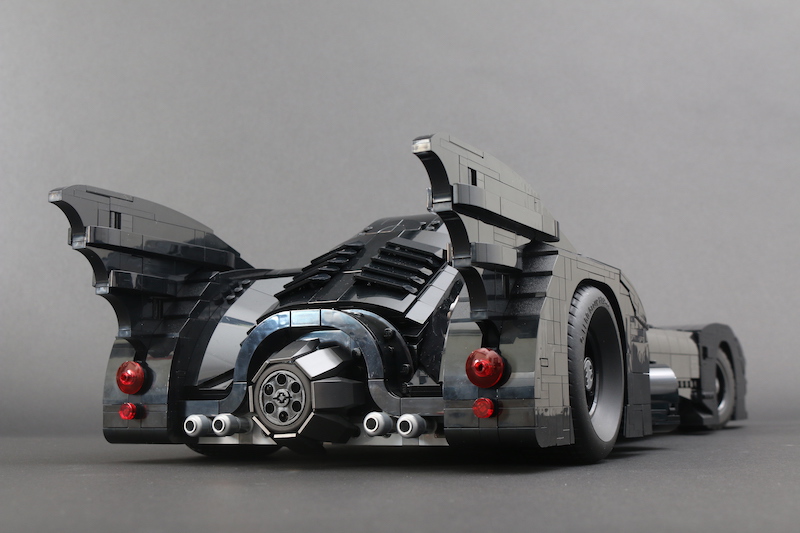 This copy of 76139 1989 Batmobile was provided for review by the LEGO Group. However, all opinions expressed are solely those of Brick Fanatics. Support the work that we do as a website and magazine by purchasing your LEGO through our affiliate links.

76139 1989 Batmobile will be available from November 29 exclusively at LEGO.com. You can help support Brick Fanatics’ work by using our affiliate links.