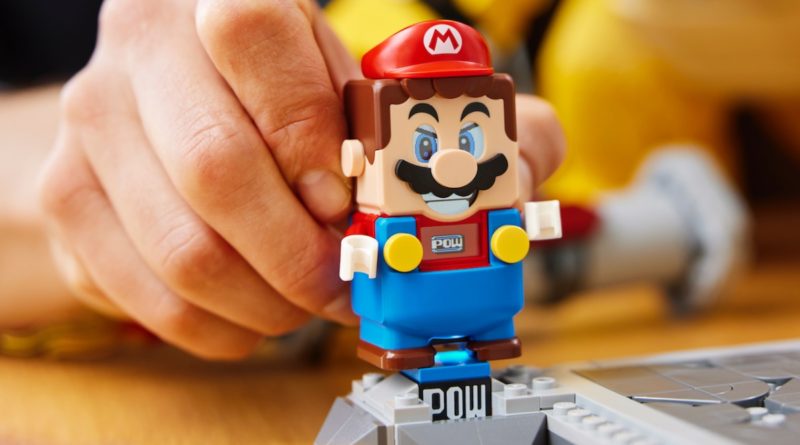 Even while the LEGO Group’s three biggest Super Mario sets stand apart from the rest of the range in terms of their build experiences, functions and display potential, the company has ensured that – if you so choose – you can still combine them with the rest of your collection, and the theme’s three digital figures: Mario, Luigi and next month’s Princess Peach.

In 71374 Nintendo Entertainment System, for example, Mario or Luigi (or, presumably, Peach) will play music and react to on-screen events when placed in the top of its retro TV. Last year’s 71395 Super Mario 64 Question Mark Block, meanwhile, includes 10 hidden Power Stars for the characters to discover and react to.

71411 The Mighty Bowser now continues that tradition by incorporating a total of four elements that can link up with the rest of the Super Mario sets. Built into Bowser’s battle platform are two towers for the video game boss to topple, while Mario, Luigi and Peach can interact with both a POW Block and an Action Tag to battle the gigantic buildable figure.

Once they’ve hopped on the Action Tag in front of Bowser, any of the three digital figures can defeat the King of the Koopas by jumping anywhere on his body or shell – a unique method of interaction for the wider LEGO Super Mario theme.

Indeed, of the three direct-to-consumer LEGO Nintendo sets released so far, 71411 The Mighty Bowser looks to be the most closely integrated with the wider range of LEGO Super Mario Starter Courses and Expansion Sets – essentially serving as an enormous Expansion Set in its own right. Check out the video below to see it in action.

Don’t worry if you don’t have any other Super Mario sets, though, as 71411 The Mighty Bowser doesn’t appear to suffer for those added mechanics: they’re all squirrelled away inside the buildable figure’s base, which means it can still stand tall as an effective display piece without combining it with any other LEGO Super Mario models or digital figures.