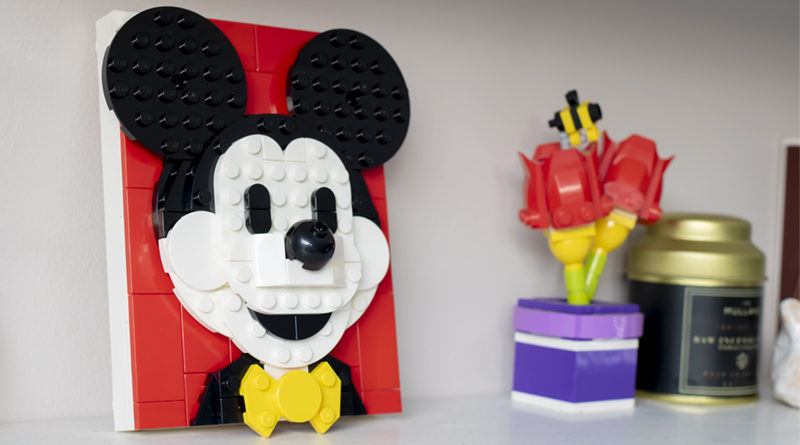 Having already taken inspiration from characters from Star Wars and the DC universe, the design team behind LEGO Brick Sketches has turned its attentions to an even bigger star for 40456 Mickey Mouse.

Once upon a time, Chris McVeigh was just like you and me: a humble, albeit incredibly talented, LEGO fan. In 2013 he created the first of his Brick Sketches (brick-built artwork designed to resemble marker pen sketches) and posted them on a social media platform. Cut to 2021, and Chris is a fully-fledged LEGO designer with his brick sketches transformed into officially-licensed products.

The first wave included brick-built renditions of Batman and Joker, as well as BB-8 and a First Order Stormtrooper. DC and Star Wars are both incredibly popular and iconic IPs, but in this latest wave fans are given the opportunity to build a legend of popular culture: the world’s most recognisable mouse (sorry, Jerry).

Brick Sketches are akin to BrickHeadz, offering fans something heavily stylised, fairly unique and somewhat divisive. Unlike a LEGO BrickHeadz model, Brick Sketches involve layering up various wedge plates, round plates and tiles to create the head and shoulders of a well-loved character, in this instance Mickey Mouse. From a distance they look like a 2D sketch, but up close the 3D layers become more apparent.

Within the box are three unnumbered bags containing the 118 parts needed to finish the sketch and the instruction manual, which rather nicely tells the story of Chris’s journey from adult fan of LEGO to official LEGO designer.

The build begins with the bottom layer, built upon four 4×12 white plates. These are connected to one another with 2×8 plates, which are eventually covered over by a series of red tiles, forming the striking red background. Red is a fantastic choice for the backdrop, as it is vibrant and contrasts wonderfully with the monochrome colour scheme of Mickey.

Once the red backdrop has been completed, the process of layering up Mickey’s face begins. Almost instantly it starts to take shape, with the shoulders comprised of two 2×2 left and right wedge plates, the head constructed from two 4×8 half-circle wedge plates, and the ears consisting very simply of two black 6×6 round plates. The ears hang over the edge of the build, giving the impression that Mickey is popping off the canvas. It’s a nice touch, adding a bit of life and character to the set.

As the layers continue to grow, more and more detail around the face emerges. Mickey’s cheeks are made from 3×3 round tiles, and a really neat bow tie is built from two 2×2 wedge plates with cut corners and a round 2×2 tile. Finally, Mickey’s eyes, nose and mouth are added and the sketch is complete.

The set also comes with a couple of brick-built options for display: a foldable stand, allowing the sketch to be displayed on a desk or tabletop, similar to a picture frame; or a 2×3 modified plate with hole, which allows the finished artwork to be hung on a wall.

The finished model does look pretty decent, and the mix of flat tiles and exposed studs makes for an attractive aesthetic that looks sleek while retaining enough to make it instantly recognisable as a LEGO creation.

There are currently five variants of Mickey Mouse mouse available in minifigure form. Sadly, none are included within this set, so you’ll have to make do with this brick-built head and shoulders instead.

Compare 40456 Mickey Mouse to sets with a similar piece count – like a Star Wars Microfighter, or a small CITY set, both of which come with a minifigure – and this suddenly feels a little on the expensive side. There are only 118 parts, no minifigure, and it’ll set you back £15.

Admittedly, this is designed for very different purposes – you’re unlikely to get any play value from these sets (apart from the time taken constructing it), but as a display piece it’s actually rather good. And when comparing this set to similar art products, it starts to feel like quite a good deal.

The LEGO Group is aware of the pricing issue surrounding Brick Sketches, having already dropped them by just over 10% in price, so perhaps the RRP is still a work in progress.

40456 Mickey Mouse certainly won’t be a set for everyone, but it’s an incredibly novel LEGO experience and shows just what can be achieved using the humble brick. Builders will no doubt get a kick out of some of the techniques used, and the level of creativity involved is very admirable. It’s not the longest of builds, and is perhaps over a little too quickly for the price, but it’s still very enjoyable to watch Mickey’s face gradually come to life.

Fans of Disney will love this and it would certainly make for a unique gift for anyone obsessed by the House of Mouse. It’s also small enough to be put on display almost anywhere too, meaning it could easily be snuck in next to the family portraits on the mantlepiece.

There are plenty of traditional LEGO sets available in this price range, and if you’re looking for a more substantial build from your LEGO sets, this probably isn’t the right choice for you. But if you’re in the market for something different, uniquely creative and a great display piece, 40456 Mickey Mouse will make for an interesting experience.