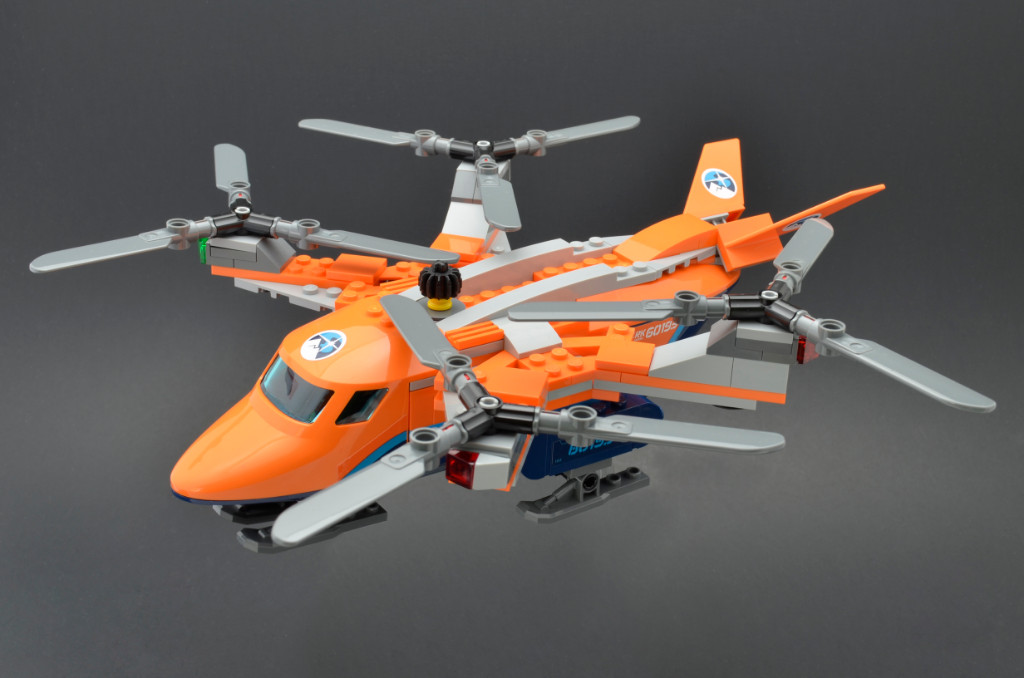 LEGO City circles back around to the arctic having spent the last couple of years treading new ground with the Volcano and Jungle sub-themes. Will 60193 Arctic Air Transport lift your spirits – or just leave you cold?

The Arctic subtheme is back in LEGO City, offering a selection of new orange vehicles and locations designed to excavate prehistoric animals. In the case of 60193 Arctic Air Transport, the sizable quadrocopter takes up most of the elements in the box alongside a quad bike – and a very desirable saber tooth tiger.

Despite being part of one of the more interesting City sub-themes, this set suffers from some of same design issues as many other City sets both past and current. The main fuselage of the plane is made up primarily of large purpose-molded pieces. These tail and nose sections are seen in many, many sets, and help take up a lot of space while lowering overall part count. The problem with the sets that lean heavily on these elements is they end up looking more like Playmobil than LEGO models. Sure the end result is slick, but it’s also dull in terms of building. I imagine many builders would trade a little visual fidelity for a more interesting build experience. On the plus side however, this design style is great for play, which is sure to make many children in the target demographic happy. 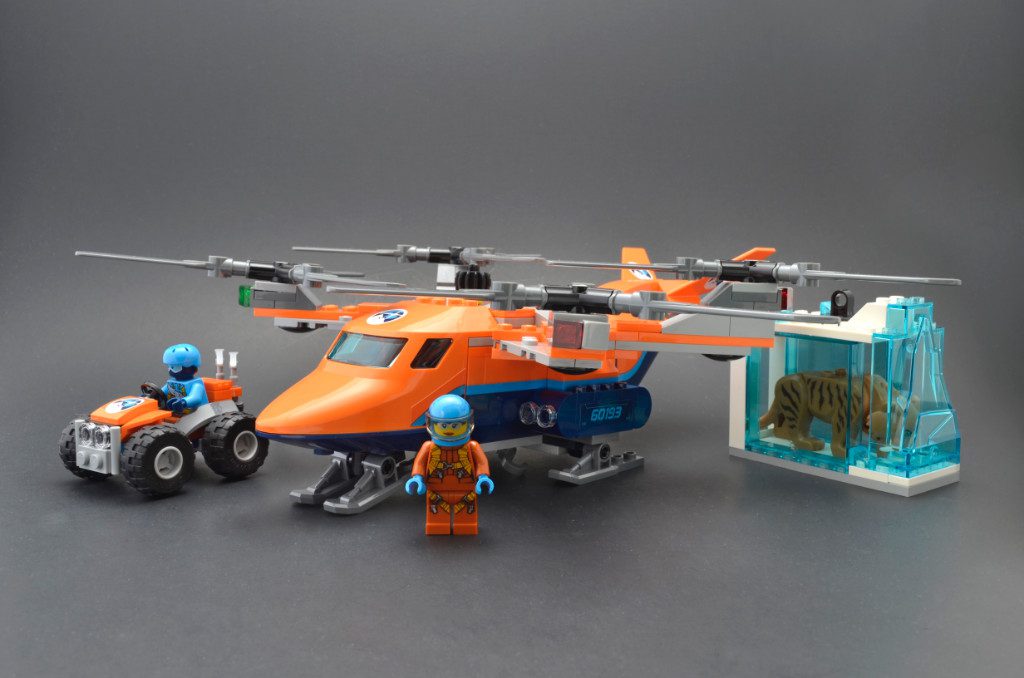 The wings on the plane are built using the Plate (A) 4M 45o element. This rather strange element has seen a lot of use since its introduction a few years back. Built off of them here are some really simple arms and the rotor assemblies. While the spinning action of the rotors is smooth, there are occasional clearance issues with the front rotors and the top of the craft. While not the biggest deal, it’s something that could have been easily resolved with just a few more parts. The plane also features a winching system with the hook protruding from the bottom of the aircraft. The winding mechanism is on top of the plane, and is a bit conspicuous.

Also included with the set is a little ATV type vehicle. There is not much to say about this really, as it differs only minimally from any number of other similar vehicles included in various City sets. In terms of play value though, the vehicle does hold a pair of ice axes and a circular saw with which the minifigs can excavate the saber tooth tiger.

There’s little doubt that this new animal element will be the big draw for people purchasing the set. While the body is the same as the big cats in last year’s Jungle sets, the head is new mold. The giant teeth make it clear this is a prehistoric creature. Seeing the furry jowls on this one make last year’s tiger feel like it’s missing something – maybe we’ll see an updated version in the future.

Another bright spot in 60193 Arctic Air Transport is the minifigures. Across all themes, this is an area in which the LEGO Group is getting better and better as time goes by. We’re starting to see more individualised figures, which is especially welcome in the City theme. Both minifigures included here display a high degree of design detail. The printed legs are the same for both, but the torsos are specific to each. There’s also the dark blue balaclava head with printed goggles. This looks terrific, and makes a lot of sense within the theme. Having more varied figures within a set – particularly with a unified theme such as this – is a great choice, as it allows children to more easily turn each into a character all their own.

Overall, the set gets credit for introducing a new type of vehicle, though its execution is about as rote as it gets for City sets. It sports some enticing elements in the new big cat and the minifigures, but most people will likely want to find the set on sale, as the price tag on this one is on the high side for what you’re getting. For those looking for an enjoyable build experience, you’re better off looking elsewhere.

60193 Arctic Air Transport is available now at shop.LEGO.com. You can help support Brick Fanatics’ work by using our affiliate links.