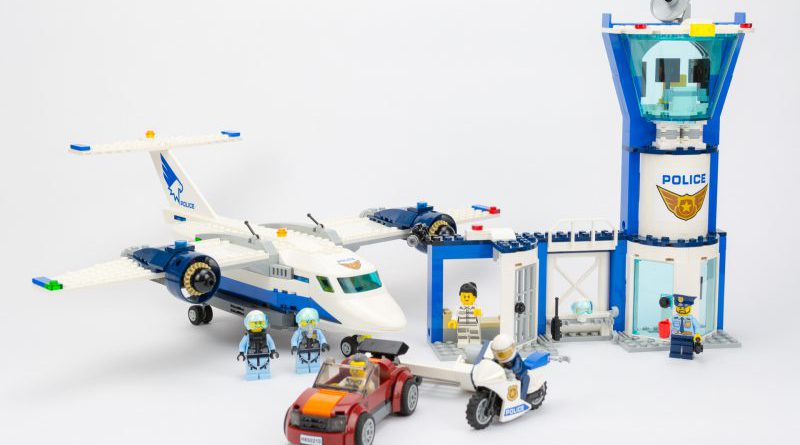 LEGO City just got a whole lot safer with law enforcement now taking to the skies. Brick Fanatics gets a bird’s eye view on the biggest set from City’s latest Police sub-theme – 60210 Sky Police Air Base

Every year, the LEGO Group continues to surprise fans with new themes and playsets – but if there is one thing you can usually count on, it is a variety of new Police sets. This time, rather than recycling the usual suspects, the LEGO City team has brought in a new division known as Sky Police. 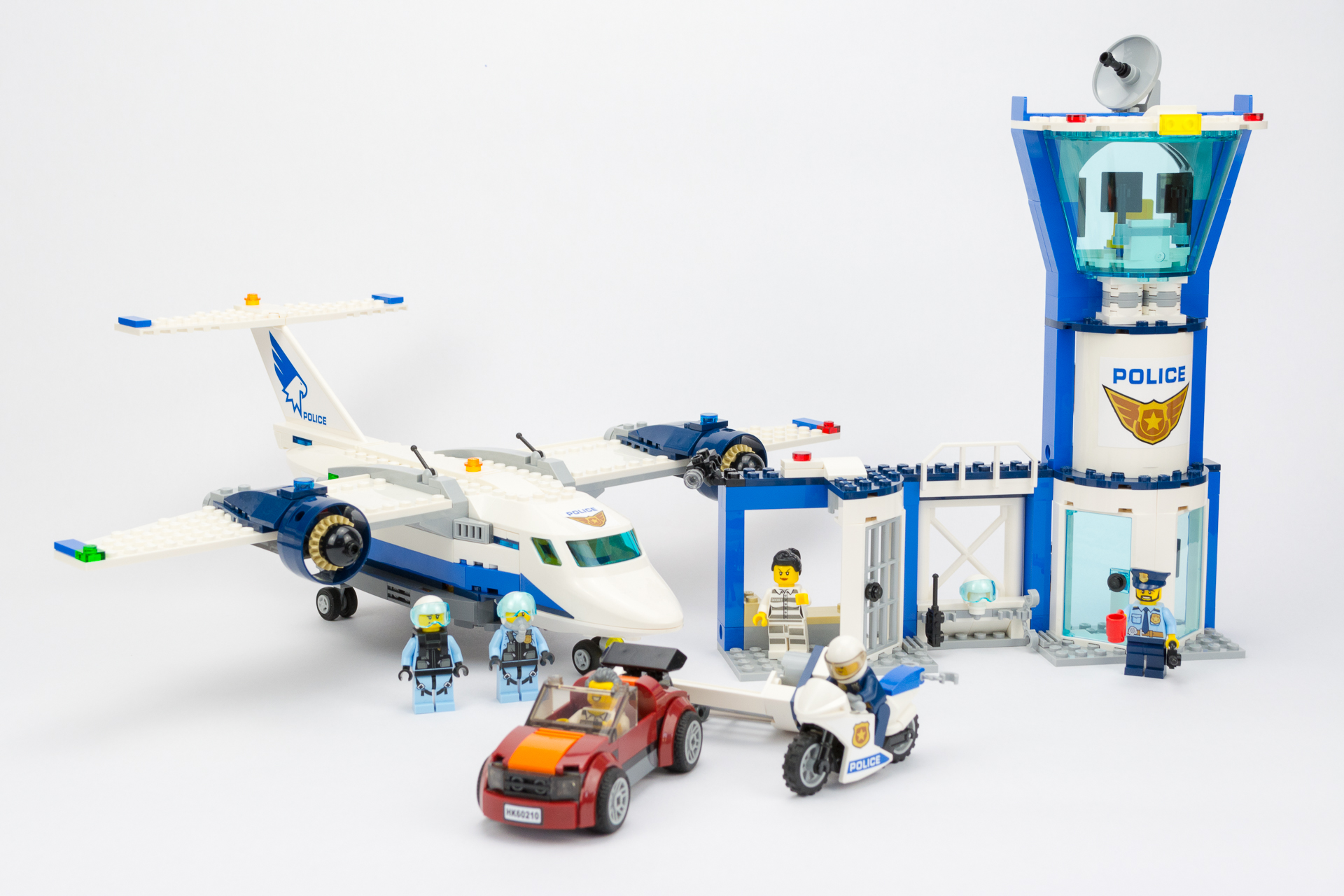 60210 Sky Police Air Base is the biggest set from the range, offering a decent selection of minifigures, a new aircraft and of course the air base itself. What really sets this new theme apart from previous Police sets is the introduction of a unique play feature in the form of parachutes.

The contents of the box contain a myriad of numbered bags, including a surprisingly high volume of instruction manuals – five in all – presumably to facilitate a simultaneous family building experience.

Any LEGO playset is enhanced by minifigures and with six included in 60210 Sky Police Air Base, fans are getting a fair selection to add to LEGO City. Interestingly, there is an even split of female and male minifigures which is always welcome in an often male-dominated city scene and can only be a good thing for the target play audience.

There are two police officers, one in standard uniform and one motorcycle cop. There are also two Sky Police jet pilot/paratroopers and two criminals to lock in the cells.

The jet pilots come with an oxygen mask which is a new element in this theme (a spare is included) and bound to be popular for AFOLs to recreate those Top Gun MOCs they have been thinking about since the late 1980s.

One item worth looking at is the new parachute. These that can be attached to a minifigure before they are ejected from a lofty height as they descend (a bit too quickly) to their safety. The material is soft and thin, but feels durable and should withstand some fairly rough play. The stroke of genius here is that the LEGO Group has provided thin plastic straps that resist twisting and make it a far easier to play with than the many hours that would potentially be spent untangling string.

For a set called Air Base, a significant amount of bricks are used up on vehicles instead of the building itself. The first is a police motorcycle which is always nice to have, but nothing we haven’t seen before.

The sports car is slightly more interesting, if only for the dark red bricks making another appearance. It is similar to the one in 60138 High-Speed Chase from 2017. It also comes with a chain ready for assisting in the easiest prison break-out of all time.

Why so easy? The answer is fairly obvious when taking a look at the set’s namesake build; the air base itself. Before I go into more detail, I’ll start by saying that I actually quite enjoyed building the base and visually from the front, it looks great.

There is a control tower to survey incoming/outgoing air traffic which makes use of some great upside down building techniques for the trans-blue window piece, a storage area for an officer’s jet pack (don’t ask), an accessory rack, a neat little foyer area and of course the prison cell which leads me to my main complaint.

One of the more disappointing aspects is that there simply isn’t more of the air base, but I understand designers work within the constraints of the piece count and price point. I do not think that is an excuse for the prison cell to literally have no back wall though. Even if it was hinged to allow for easier play access, it should be a necessity. Why go to the trouble of having the vehicle rip the front wall off when the felon can simply walk around the side and, hey presto…they’re free? 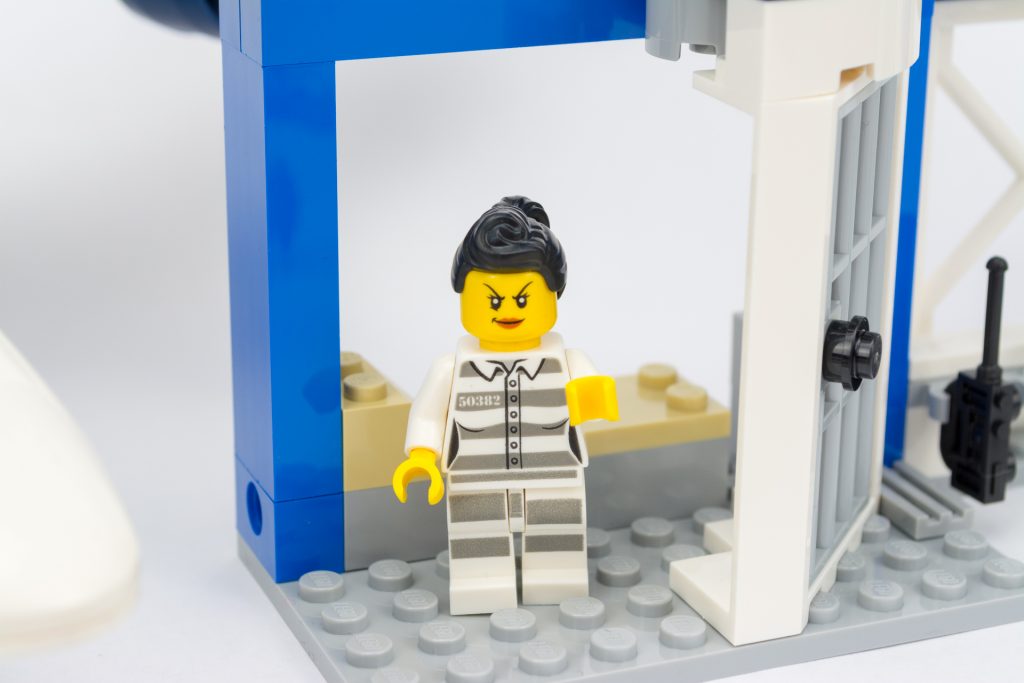 The final build of 60210 Sky Police Air Base is the Sky Police airplane which I think strikes the right balance between a slightly juniorised aesthetic but with a fair amount of building still involved. The engines flanking each side of the aircraft seem to pass directly through the wing which is a little odd, but it’s a still a fun build that I can forgive its inaccuracies – especially given the excellent swooshability. As with most LEGO City sets, stickers are included here and although getting some of them lined up will prove frustrating for some, the end result is worth the minor inconvenience.

It feels solid to hold and includes a nifty little feature on its underside whereby release of the parachute is possible via a turning gear and a locked plate. 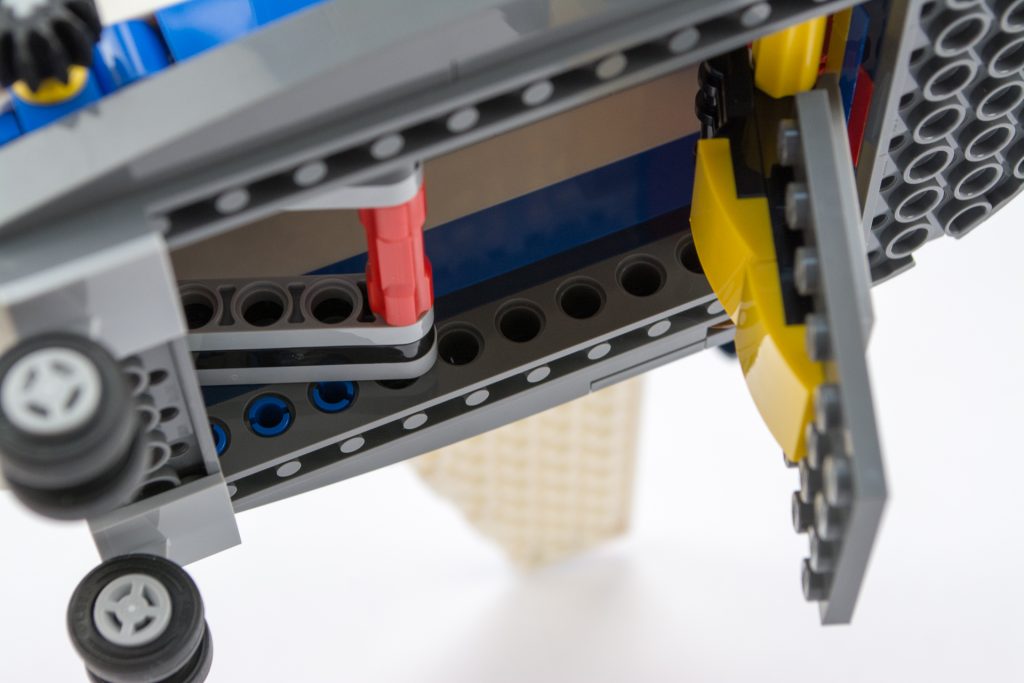 As mentioned before, the parachute falls very quickly and even an adult holding the plane at full stretch above their head is unlikely to achieve the desired effect, so unfortunately, whilst it’s a unique and valiant attempt to introduce a new feature, the novelty will wear off very quickly – especially for children who may expect it to work more successfully than it does.

With enough variety here for decent storytelling, children should be entertained for a few hours by the selection of minifigures and vehicles. The parachute fad is unlikely to last, but as long as the LEGO Group continues to innovate, our imaginations are in safe hands for the foreseeable future. This is not the most substantial Police building that the LEGO Group has released, but it includes enough features to make it a fun set.

60210 Sky Police Air Base is available now at shop.lego.com. You can help support Brick Fanatics’ work by using our affiliate links.