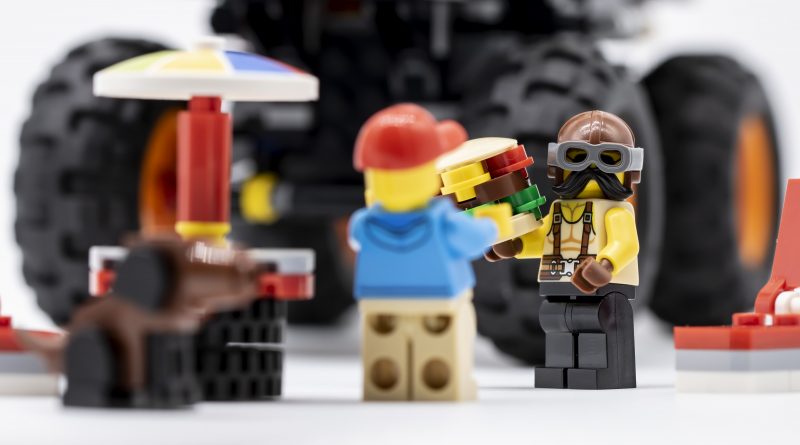 LEGO Creator 31104 Monster Burger Truck is a set that feels like the LEGO designers have been allowed to let their imaginations run free – it’s big, bonkers and quite brilliant

31104 Monster Burger Truck offers up a first for LEGO fans, a monster truck that doubles as a burger van. It’s silly, crazy and a lot of fun – exactly what LEGO should be. There are 499 parts included in the set and not only will that allow you to build the aforementioned Monster Burger Truck but it can be dismantled to construct two equally zany, over the top vehicles.

The monster truck burger van is the biggest build of the three and is the recommended model to begin building. The first bag concentrates on the main chassis of the truck, as well as a small table with umbrella, two brick built chairs and a brick built dog.

The two chairs are assembled using only a handful of parts – a 1×2 plate and a 1×2 inverted bracket, a 2×2 plate and a 2×2 flag attached to a 1×2 plate with handles. It is simple yet effective. The table is another straightforward build but ties into the custom automotive vibe of the set using two tyres as the base.

A really decent looking burger is made from a mix of 2×2 round plates representing the burger and bun and 1×1 round plates that represent the tomatoes and lettuce inside. The little brown brick built dog completes the side assemblies included and it’s fantastically cute. The black binoculars used for the front legs are an ingenious usage of parts, as are the way the 1×1 bracket and neck bracket are put to use. It’s also nice to see the designers opting to include a brick built dog rather than relying on a single animal piece. On a side note a slight recolour of the parts and any Snoopy fans out there would have a fantastic rendition of the famous beagle!

With the smaller builds out of the way it’s onto the main build, starting with the Monster Truck’s chassis. The construction of the chassis for the truck is unlike any conventional LEGO set, relying on four 2×4 perpendicular pin connectors to form the axles, which are then held together with two 7l hose pipes. Like most of this set it’s unusual, but in a good way.

It’s such a refreshing building experience when new techniques and parts are utilised and this is no exception. It’s quite unique and as a result makes each step as entertaining as the last. A staircase built using eight 2×1 Black double slopes slides into the underneath of the chassis, which is concealed within the main body of the Monster Truck. It’s yet another wonderful example of the ingenuity and creativity that is evident throughout this set.

The roof is made up of a few different sub assemblies. One large section that can be lifted off for access to the interior and one flap that opens over the opening of the truck as a serving window. Finally, a giant brick built burger is placed on top complete with lettuce, ketchup and mayo bursting out of the sides. In keeping with the rest of the build, it’s excellently designed and should put a smile on the face of any LEGO fan.

The burger bar comes fully stocked with all the condiments a chef could need (made from 1×1 round bricks and tap pieces) and a grill with a large burger (brown round 2×2 plate) cooking away on top. The detailing for the menu and ‘monster burger’ comes courtesy of two stickers, the graphic design for both is incredibly striking and feels very fresh when compared next to more conventional LEGO sets.

Once finished, it’s an impressive looking model. The wheels are suitably big and chunky and give the vehicle some real height, standing nearly five times as high as a minifigure. They are also on a suspension mechanism that feels incredibly accurate to a real life monster truck. It’s a pleasure to build with enough unique techniques to keep even the most experienced builder entertained.

The finished model is quite unlike anything else LEGO has released before, it feels like the designers were really let off the leash with this one.

The beauty of a three in one set means there are two more models to build using the same bricks. The downside is having to take apart such a wonderful build as the monster truck.

The next modelin 31104 Monster Burger Truck, a giant oversized jeep, starts off a lot more conventionally than the monster truck and as such comes together a lot quicker. There are some nice moments during the build, ike the 1×1 open round stud attached to the claw that forms the exhaust, and the overall look is made a lot more aesthetically pleasing with the use of tiles and tiled curves in various places across the body work.

Unlike more conventional LEGO cars there are actually very few studs exposed. It helps to give the final model a more polished look. It is very much in the same vein as the mosnter truck – a big, outlandish, oversized vehicle that’s definitely fun. It’s not exactly minifigure scale, it absolutely dwarfs them, but again that keeps it tied nicely to the theme of this set.

The final model is also big, brash and bonkers. A hot rod tractor complete with its drag (here, a trailer with two giant tyres). Vehicles like this take part in a sport called power pulling, in which modified antique tractors pull heavy drag behind them as fast as they can, and with that in mind this is actually the most accurate of the three models on offer.

Although it’s the most accurate build it’s probably the most straightforward in terms of building techniques. There are little touches that demonstrate clever parts usage throughout such as the 1×2 bracket and two 1x1x1 corner panels used as the engine’s air intake and the sub assembly that makes up the hinged windscreen is pretty smart too. Despite these little pockets of creativity the build is over pretty quick as this tractor is actually the smallest of the three builds. It’s definitely a fun little model, but certainly not as creative or impressive as the two that proceed it.

The two minifigures included within the set compliment the vehicles well. The burger chef is dressed in a tight vest with braces, aviator shades and sports an impressive handlebar moustache. An aviation cap and goggles complete the look. The second minifigure is a little plainer, with a simple blue hoodie and red cap.

LEGO Creator 31104 Monster Burger Truck is one of the most enjoyable 3 in 1 sets that the LEGO Group has produced. It’s wacky, fun, big – and slightly nuts in a good way.

The design is top notch and the techniques are different to a lot of sets available. The brick built accessories such as the dog, table and giant burger are all welcome additions and should help inspire creativity within the MOC building community. If this set was just the Monster Burger Truck it would be worth it, but the ability to build another two decent models using the same bricks makes this a 3 in 1 must-own.

31104 Monster Burger Truck is available now at LEGO.com. You can help support Brick Fanatics’ work by using our affiliate links.