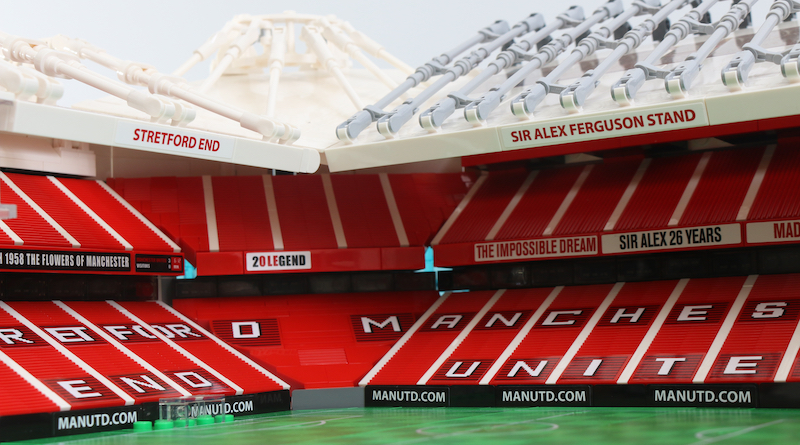 Champions of England 20 times, the first club from the country to win the European Cup, the first and only English side to win the League, FA Cup and Champions League in one season, financially valued at over £3bn and one of the most widely supported teams in the world. There’s a lot to say about Manchester United’s achievements, direction and growth on and off the pitch through the years both recent and distant. Theirs is a history that goes back well over 100 years, includes several trophy-laden eras and can list two of the game’s most iconic, successful and longest-serving managers, as well as a plethora of great and talented footballers who are forever celebrated and remembered in song and tribute every matchday at Old Trafford.

Opened in 1910, the Theatre of Dreams has borne witness to the last 110 years of Manchester United history, serving as home to many an era-defining football team the club has produced, and to tens of thousands of fans who have filled the stands week in, week out. Central to everything United for more than a century, what better to be the subject of a first official LEGO set then?

When Manchester United let slip their partnership with the LEGO Group back in November, we had speculated as to what set or sets could be produced as a result. One easier prediction was indeed a large microscale build of Old Trafford, and thankfully, the LEGO Group has not disappointed in offering up 10272 Old Trafford. A display model aimed at older LEGO builders aged 16 and up, this is a set that tackles truly challenging and one-of-a-kind source material and, in applying the same standards of excellence we can almost take for granted in this current era of LEGO, truly delivers a one-of-a-kind LEGO set.

In putting it all together, the multiple bags of the build are split across five sequences, constructing the pitch, then each of the four stands. What could be a laborious process in building a 3,898-piece display model isn’t, thanks mainly to two initiatives. The first is how the instructions, instead of having all the facts, figures, information and designer interviews at the front of the book, cleverly break up this material amongst the step-by-step instructions. Specifically, that is between construction of each stand, with the relevant information and insight into each stand preceding its LEGO instructions. It’s only a small difference to other large scale LEGO sets of late, but one that better marries the written material with the physical bricks, allowing builders to discover more about what they are putting together section by section, stand by stand, as they go along. It means that as you build Old Trafford, you read about it, for an almost brick by brick tour.

The other key aspect that draws interest during building the model is just how smart and intricate the process is. There are numerous directional changes, unique angles and complex slopes expertly caught within this model and in some cases unexpectedly achieved. How this LEGO Old Trafford is built feels almost like an illusion. What you’d expect to be weight bearing pieces merely float, whilst entire sections of the model are in place thanks to nothing more than a couple of well-placed clips on bars. Old Trafford is a building shaped like no other, with all number of details and identifiable traits to its design. That the LEGO set manages to capture as many of these as possible, all whilst in a blocky medium and built at the more challenging and subjectively creative microscale, is remarkable.

This is a model that certainly benefits from Old Trafford’s rather unique aspects in design, the result of decades of continuous rebuilding, renovation and expansion. What Old Trafford is today is nothing like how it was 100 years ago, yet at the same time, it only looks as it does today because of what it was before.

The stadium’s original construction only accounted for cover for the main stand – known as the South Stand before 2016’s renaming as the Sir Bobby Charlton Stand – when built in 1909, before the addition of roofing to the other stands in the years that followed. Two bombing raids during World War II forced significant rebuilding of the ground, whilst the prospect of hosting matches for the 1966 World Cup prompted the start of an almost 30-year initiative to change the entire roof support structure from view-obstructing pillars to the cantilever structures in place today. These cantilevers are one of the ground’s most unique aspects, and dominate the LEGO model’s roofing just as they do the real world stadium.

Such work on the roofing only culminated with completion of the Stretford End in 1994, before dramatic expansion of the United Road Stand (also known as the North Stand and later renamed the Sir Alex Ferguson Stand) began just the following year, in part the result of a diminished capacity following the Taylor Report’s ruling that, in light of the 1989 Hillsborough disaster, top stadiums in the country had to convert to all-seated. Following complete demolition, the 26,000 all-seater stand reopened in time to host matches at Euro 96.

The East Stand was then expanded by a tier by January 2000, followed soon after by a second tier being added to the opposite Stretford End, and most recently (circa 2006) expansion to the north-east and north-west quadrants of the ground. Current capacity sits at 74,879. Further work through the stadium continues, including this season’s £11m investment to introduce 118 new wheelchair positions and 158 amenity seats dotted throughout the stands.

Old Trafford’s is a history filled with countless projects of expansion and redesign across the four main stands, that has seen growth upwards and outwards, as well as further development and modernisation inside each stand – for instance, the Sir Alex Ferguson Stand now houses a three-floor museum, as well as a packed trophy cabinet (even if there are no signs of this being added to at the moment…).

That constant working and reworking of the ground, stand by stand, inside and out, has resulted in the creation of this unique and rather unusual mass structure, with character and history etched into every stone, and innovation and creativity at the heart of its ever-growing architecture. This is the first stadium to introduce private boxes – back in the 1960s – it has the biggest club capacity in the UK (only the national stadium Wembley holds a greater number), boasts unrestricted views from every angle, and has the largest cantilever roof in Europe on the Sir Alex Ferguson Stand. And, as home to one of the world’s biggest and most successful clubs, Old Trafford’s is a storied history.

And almost every aspect of that history, every nod and tribute, innovation and grand design that makes up the Theatre of Dreams is wonderfully captured in 10272 Old Trafford. Tantamount to the more mature and frankly marvellous LEGO Architecture line in style and complexity, this is a model that has been mastered through the LEGO Creator Expert theme’s design process to not waste a single brick of the 3,898 that are included. It is at once both expert and unique, and a model that from any angle rewards its viewer with the same detail and eye-pleasing splendour that the actual Old Trafford offers in real world scale. For Manchester United fans and LEGO fans, there’s perhaps no better LEGO set that could be produced in 2020, both for what it captures in brick form, and just how expertly so that it does.

Manchester United may not be enjoying the best of fortune on the pitch at the moment, but for what Old Trafford signifies as a part of and witness to its club’s history, through the years in both tragedy and victory, it’s the perfect subject to be turned into a LEGO set. And with 10272 Old Trafford, it’s the perfect LEGO set too.

This product has been provided for review by the LEGO Group.

10272 Old Trafford is available now at LEGO.com. You can help support Brick Fanatics’ work by using our affiliate links.