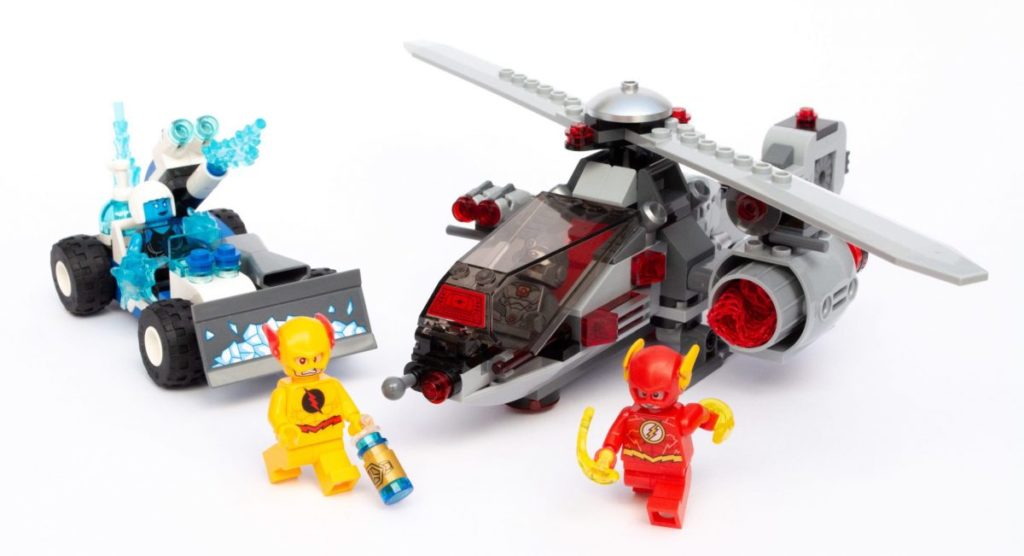 After a veritable overload of LEGO Batman following his animated adventure last year, we take a look at what new the LEGO DC range has to offer in 2018

If like me, you’re a big fan of LEGO Superhero sets, but found that the sheer amount of The LEGO Batman Movie sets last year started to get a little weary, then this might be a set for you. Still branded under the DC Super Heroes theme, it also features a Justice League graphic (not to be confused with the DCEU film version) emblazoned on the bottom corner of the box. This lets you know that already these aren’t sets revolving solely around the Dark Knight, opening up all sorts of possibilities for unusual and exciting future releases. Sure enough, this set focuses on Flash and Reverse-Flash, conveniently timed to tie in with the release of a new animated movie. 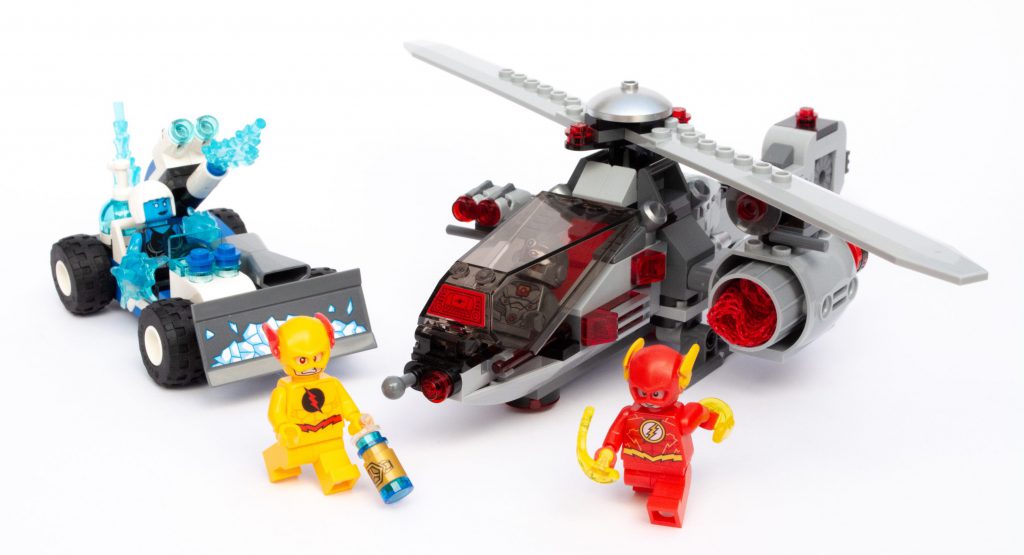 Although it doesn’t happen often, getting a set which doesn’t feature Batman in starts to feel like a bit of a treat. 76098 Speed Force Freeze Pursuit contains four minifigures to add to your ever-growing collection of super minifigures, including two hitherto unreleased in LEGO form.

This time around it looks like the LEGO Group has drawn upon DC Rebirth for the design of their minifigures and, as usual, the level of printed detail is superb. 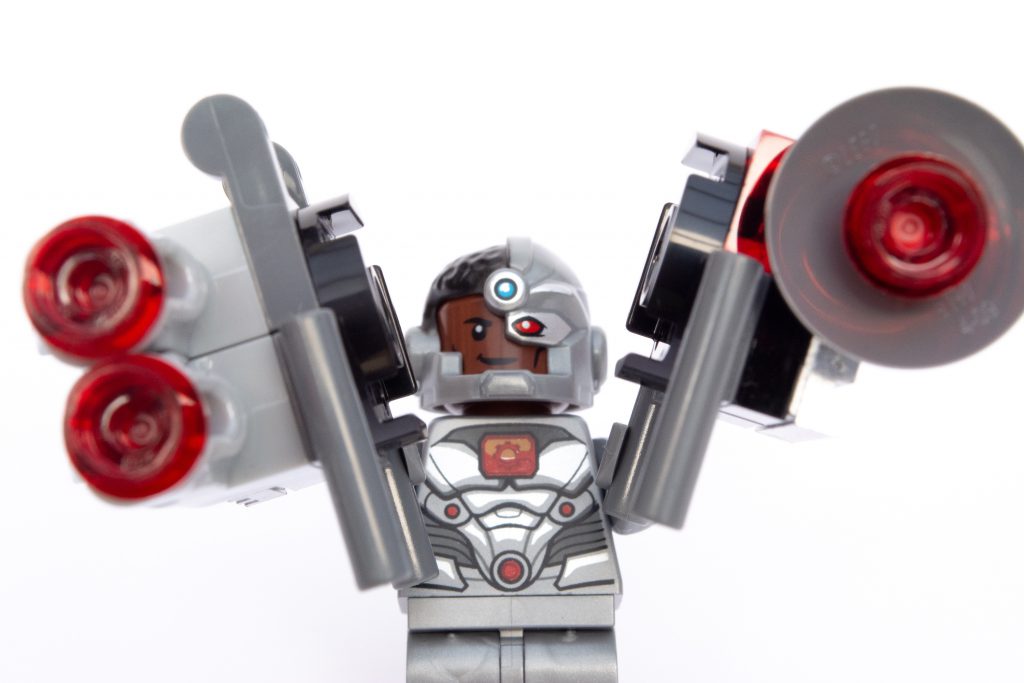 Cyborg is made up of pearl silver body components with the torso printing showing his cybernetic body and only his helmet/head-piece revealing he is half-man, half-machine. It is somewhat disappointing, however, given the previous film and New 52 version, that there is no printing on the legs. It seems a little lazy, but nonetheless it’s great to see more variants of the less common members of the Justice League. I also really enjoyed the fact that you can remove parts of the CyborgChopper to give him accessories, but I’ll cover that in the build section.

The Flash appears here not looking quite as detailed as the film variant released for Justice League, but still different to the one released in 2014/15, which is all collectors will want to know. Wearing his familiar red suit and helmet, the main difference is the addition of gold lightning lines on the torso which, whilst resembling his Rebirth iteration, support the concept of just how fast Flash is. A nice touch by the graphic designers. 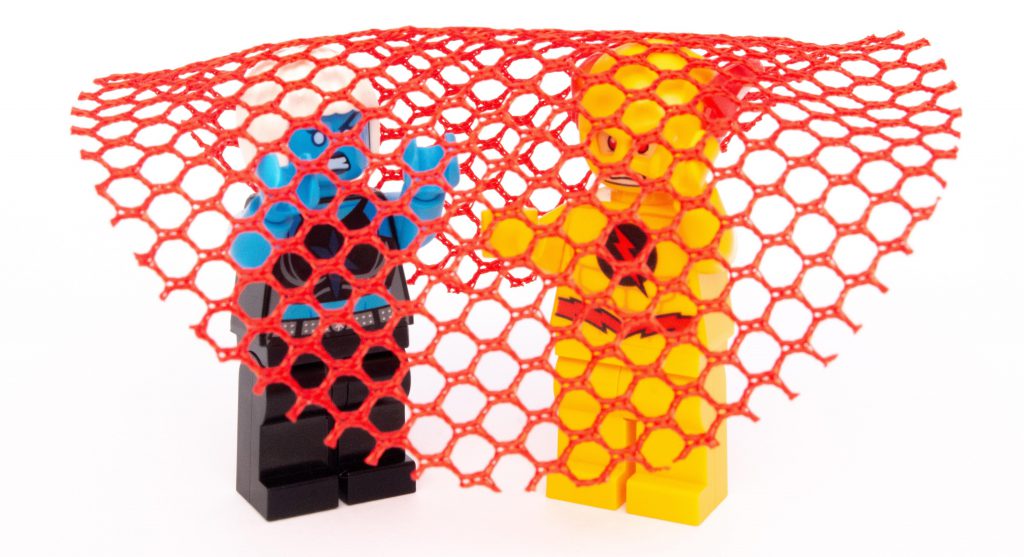 Barry Allen’s arch-nemesis Eobard Thawn, better known as Reverse Flash, makes his debut appearance in LEGO form here, and looks brilliant. As the name suggests, he’s the exact opposite of the regular Flash wearing a yellow suit with red hip detailing, and a red flash on black circle on his chest. The helmet also matches with little red lightning bolts on either side of the otherwise yellow headgear. He is also carrying a blue energy infuser accessory, the MacGuffin of the set, but for such a small piece looks very nice with the printed 1×1 pearl gold round brick.

The last minifigure, but by no means least, is Killer Frost – also exclusive to this set. She has dark azure arms/hands and head, with a white bob hair piece only previously found in the 70903 The Riddler Riddle Racer set. The torso has got excellent printing, matching very closely to the Rebirth character design with a black crop top featuring a frost/snowflake insignia design that matches the one on her belt. Once again, we only get plain black legs here which is disappointing, but overall this will be a popular minfigure for collectors. 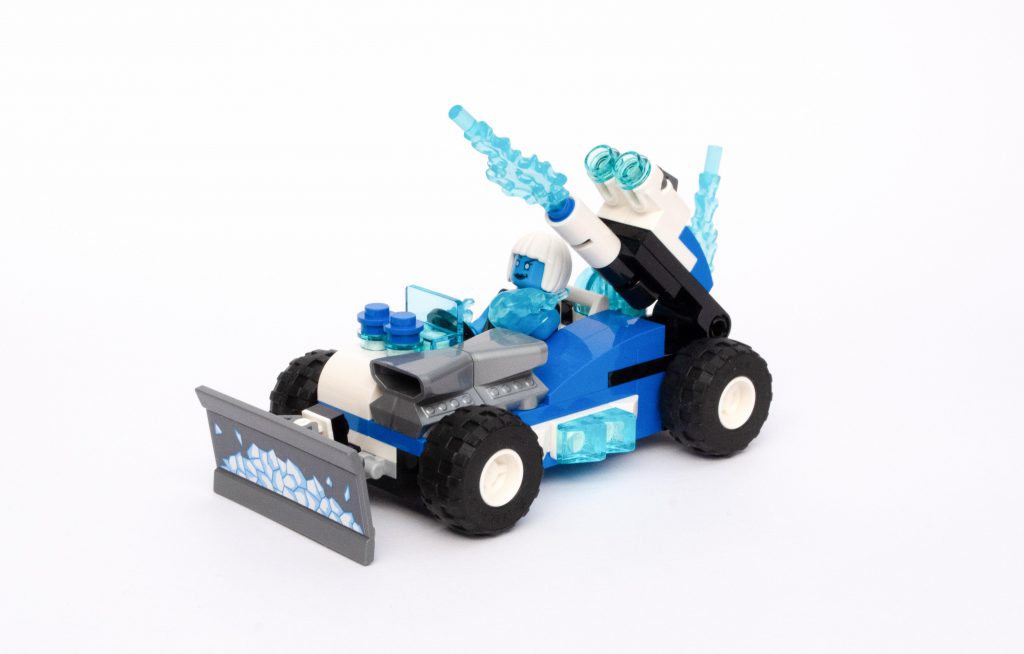 With a set name like Speed Force Freeze Pursuit, it’s a good job we get two vehicles otherwise it wouldn’t be much of a fair chase. The first vehicle to build is Killer Frost’s Ice Car which isn’t based on anything from the comics that I am aware of. For such a small build, LEGO designers have packed in a few playable features such as a snowplough front and two stud shooters.

Also included are a variety of new flame-styled components in trans-blue which can be used to customise your vehicles or minifigures. 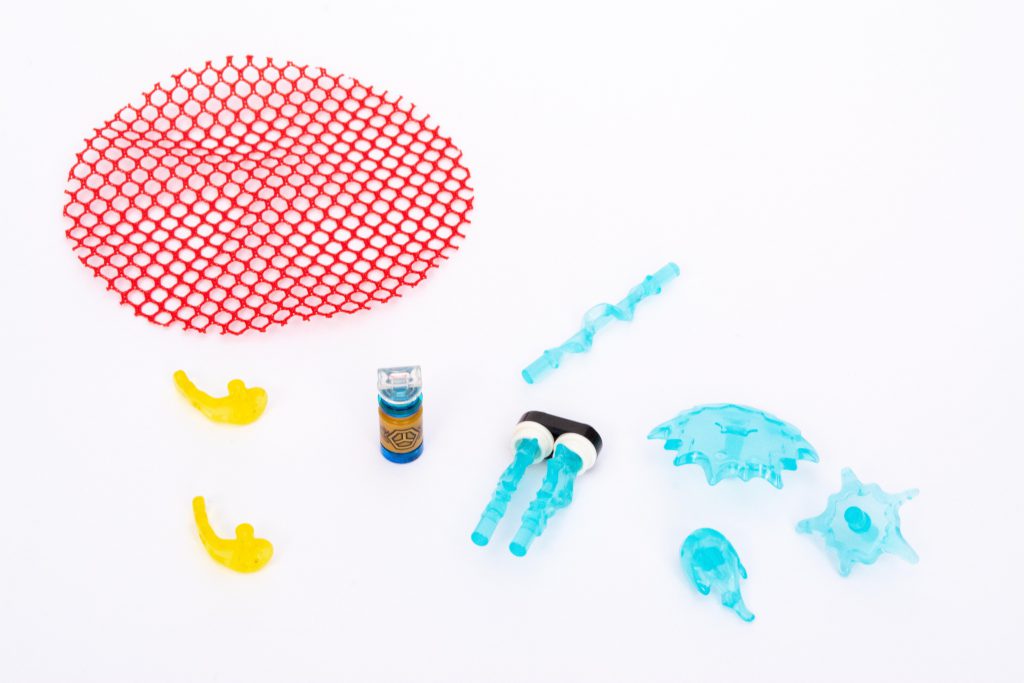 LEGO call these ‘Power Burst’ elements, which is fairly accurate because some of them can be fired from a minifigure hand by lightly pressing down on the outer edge; in this case only the Flash’s trans-yellow ones can, whilst Killer Frost’s cannot. Either way, these will offer a new level of detailing that I can’t wait to see start appearing in more builds. 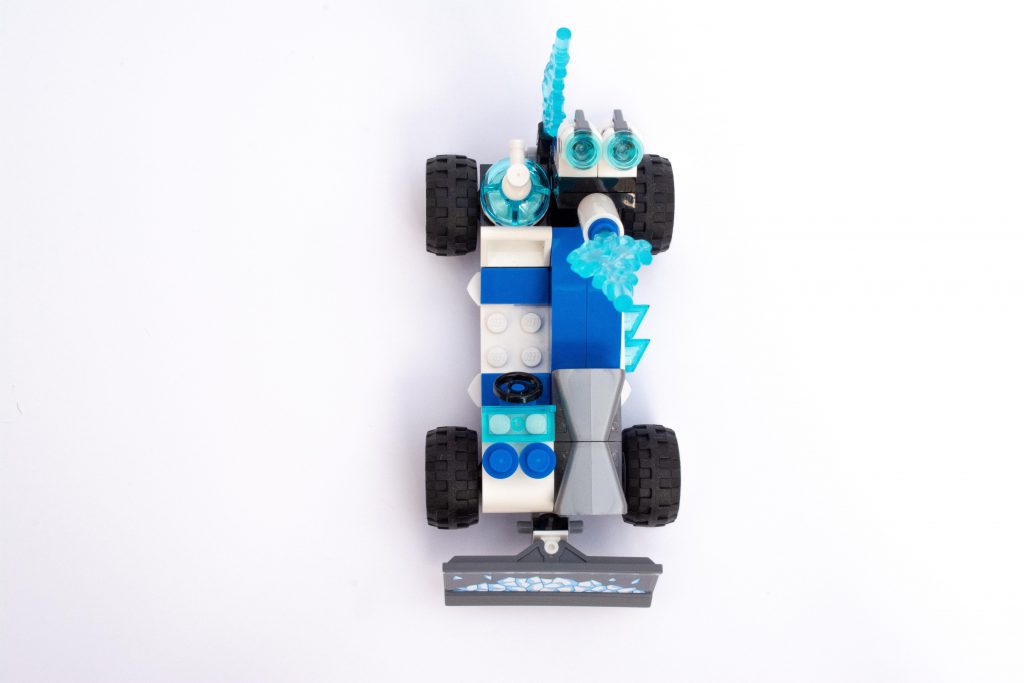 Overall, it’s a cool colour scheme (pun intended) and will do the job of providing enough playability to let kids’ imaginations do the rest. It is a very basic build though, and part of me thinks that the pieces could perhaps have been put to better use by allowing more to be added to the CyborgCopter, which is the real star of 76098 Speed Force Freeze Pursuit. 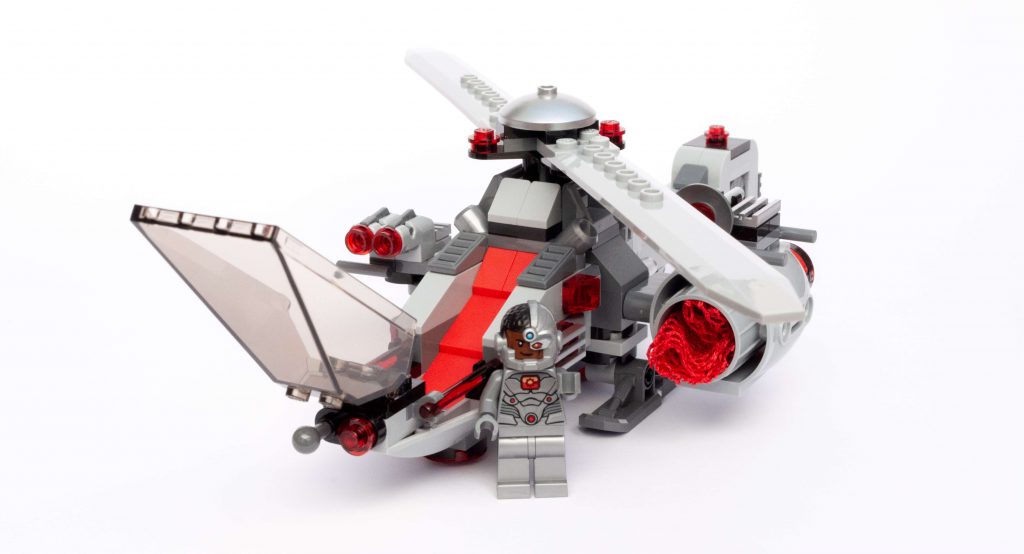 Helicopters continue to appear in LEGO sets scattered through most themes, mostly in City, but are no stranger to the Super Heroes ranges. It’s easy to dismiss it as yet another helicopter, but actually, I’m really taken with this one. The LEGO Group really went to town with the character-matching colour scheme and it makes this helicopter far more eye-catching because of it.

The grey with trans-red elements & touches of pearl silver complement each other perfectly, very easily identifiable as Cyborg’s colours. It’s not a huge chopper, with only space for one minifigure to sit in the cockpit, but it does have immense swoosh-ability. Armed with dual stud shooters on one side, and a net shooting canon on the other, you’ll be catching the bad guys in no time. 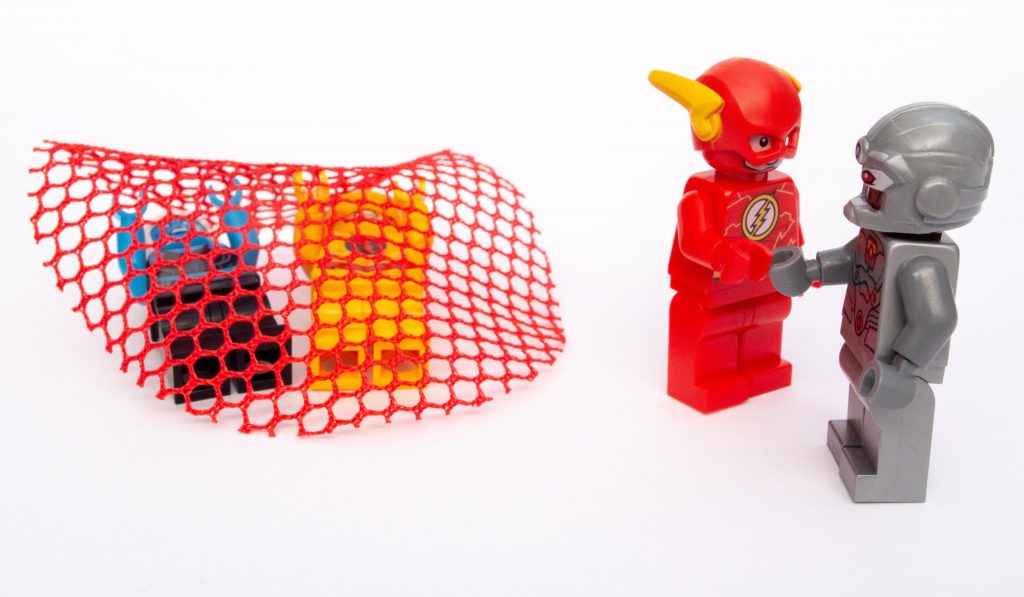 One aspect I particularly like are the accessories flanking the rotors which can be removed from their position and used as minifigure accessories by Cyborg for an on-ground pursuit. This is a simple idea, but adds another level of play which kids are going to love. The stickers in this set are – thankfully – rather minimal, but as usual do make the models look that much more complete. 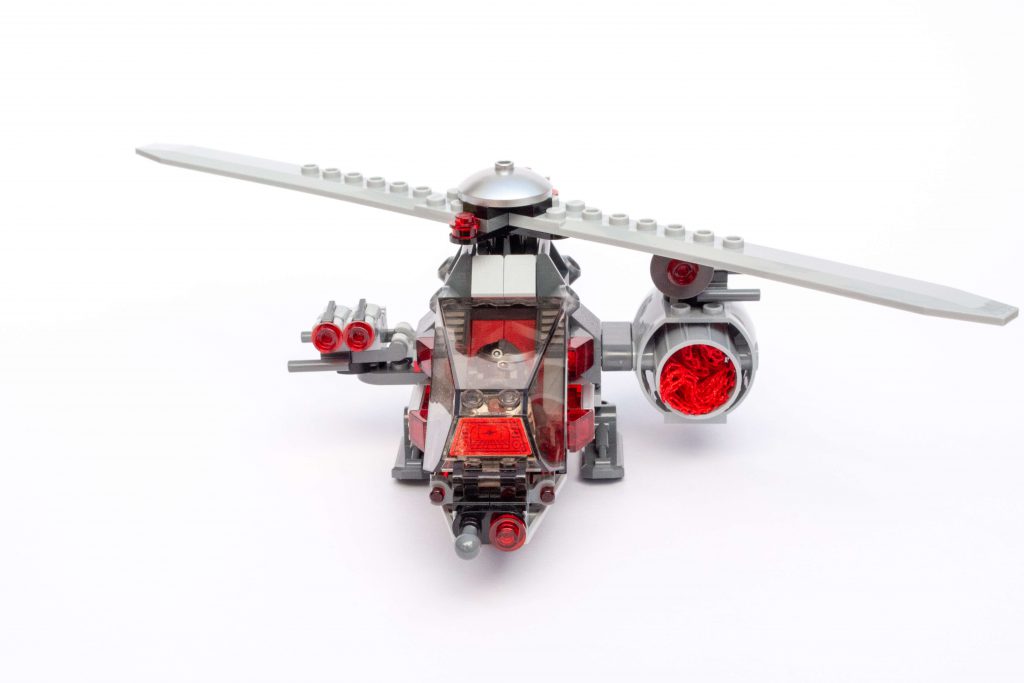 The only label I have a bit of an issue with is the one on the front of the cockpit glass which strikes me as an odd choice of placement. Surely it would be better on the inside dashboard, where Cyborg can see it? Perhaps with his advanced cybernetic brain, he doesn’t need to see it anyway.

A great selection of minifigures, including some never released in the brick before, and eye-catching vehicle design makes this a fairly collectible choice. I’m somewhat less bothered by the Ice Car, but it does mean that younger LEGO fans can enjoy an actual chase so I understand the decision to include it. This is a pretty decent set and if you can find it at a discount, it’s one you should probably pick up if you can, if only for the exclusive figures. 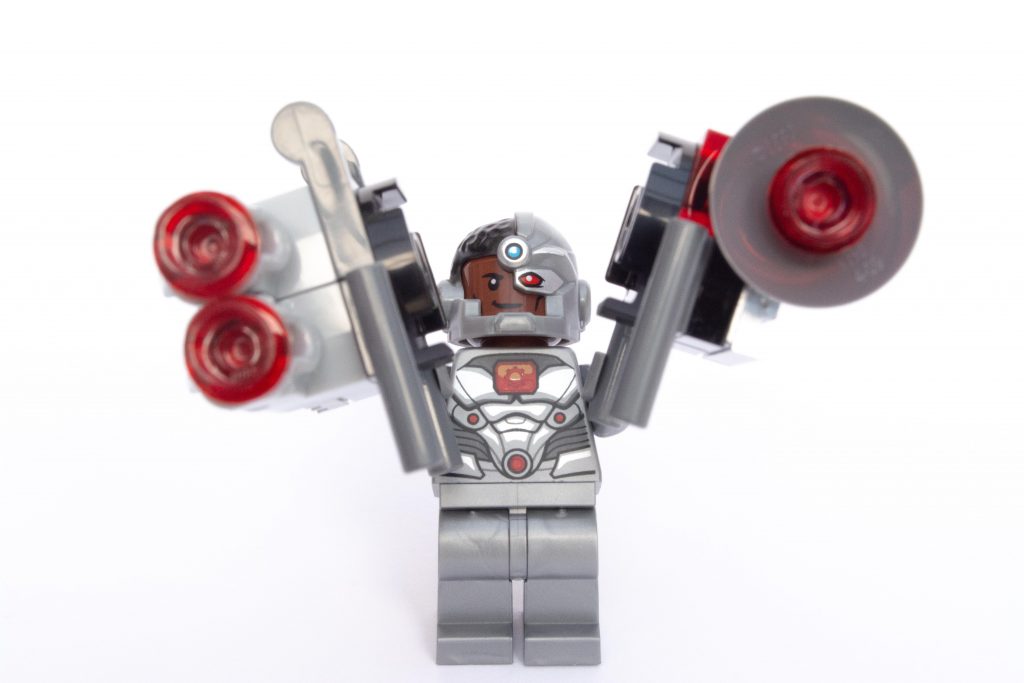