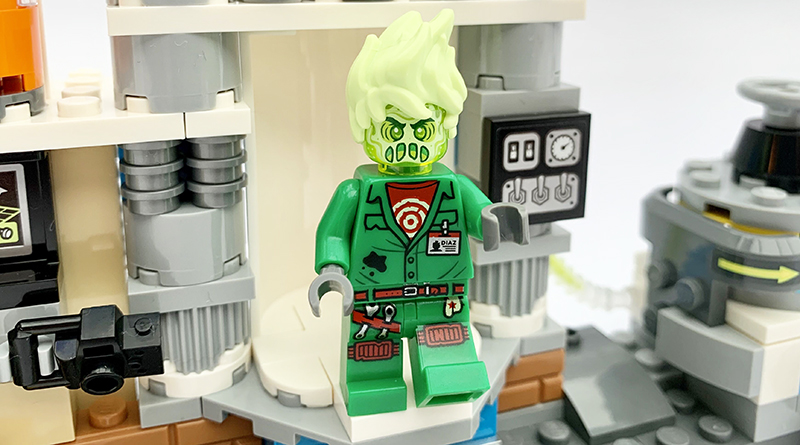 Is 70418 J.B.’s Ghost Lab the place to figure out was is going on in the LEGO Hidden Side?

The LEGO Hidden Side theme combines the brick and technology to bring a fully interactive, augmented reality experience. 70418 J.B.’s Ghost Lab is part of the initial wave of Hidden Side sets and at the lower end in terms of the price point, but it is still packed with loads of appeal.

There’s a neat storyline behind the set, which I imagine will really appeal to younger builders and can only promote play. Douglas Elton is the friendly janitor who is being possessed by a ghost figure, but luckily J.B. is on hand to exorcise any spirits using her ‘Tesla-powered’ chamber. The hero of the Hidden Side theme, Jack Davids, is also featured along with his ghost-dog Spencer, and the creative team have gone to the trouble of setting the whole theme in the fictional town of Newbury to provide a whole back story on which kids can develop their play.

The laboratory has a very ‘mad scientist’ feel to it and it has a number of play features even before you fire up the app. The left-handside of the Ghost Lab includes a 3D printer and a computer driving it. It also includes both camera and spanner elements which clip either side of the computer, and above it is a shelf containing three brick-built coloured jars of liquid.

The centre of the lab is where poor Douglas is transformed from his ghostly alter-ego and this part of the set really plays to the classic horror movies with large Tesla coils powering the chamber. The smart use of a sticker adds details to this part of the build and then the right-hand side of the build houses a colour-wheel, the purpose of which is fully realised when interacting with the set through the app.

The rear of 70418 J.B.’s Ghost Lab includes a ladder and features a large sticker on the panel part – both nice features but the augmented reality is focussed on the front of the lab so this is really reserved for traditional play.

Brick Fanatics interviews the designers behind LEGO Hidden Side

All three minifigures are excellent and the design and quality of the printing are wonderful. J.B. has blue hands which I can only imagine represent surgical gloves and the hair piece complete with goggles is wonderful. I love the cap and hood part for our hero Jack Davids, it’s beautifully executed and aesthetically looks great.

Finally, there’s Douglas Elton who also has an alternative head and hair parts for when he has been overcome by one of the ghosts who haunts Newbury. Spencer the Ghost Dog is also a delight and the designers have done an excellent job of making Jack’s loyal companion more cute and other-worldly. Our minifigures also have plenty of cool accessories including two printed smartphone parts, a potion bottle and a pizza for when they have some downtime.

I decided to let my eight-year-old son loose with the Hidden Side app and it was interesting to watch him interact with the set using a phone. The augmented reality side of the play was impressive but became a little repetitive and eventually the phone was put down but play continued, much to the set’s credit. I do welcome the appetite that LEGO has to mix bricks and technology, but the set generates plenty of play and imagination without it.

This is a good value set with great parts, nice detail and wonderful minifigures – all of these features are consistent across the theme so I’d encourage anyone to look further than just this set.

70418 J.B.’s Ghost Lab is available now at LEGO.com. You can help support Brick Fanatics’ work by using our affiliate links.