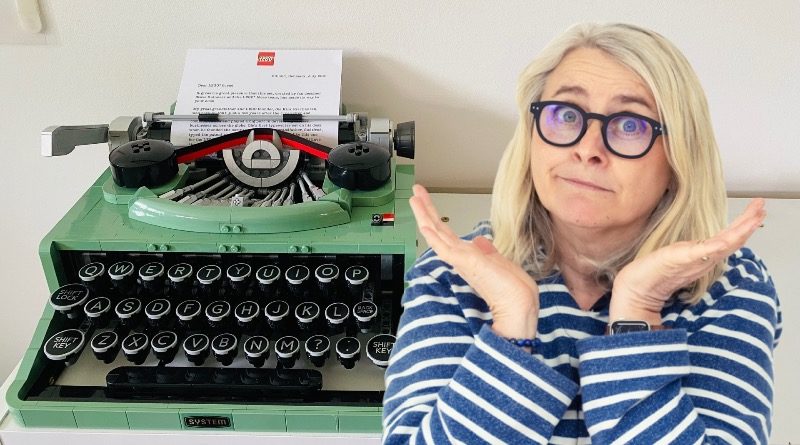 Author and screenwriter Emma Kennedy reveals how LEGO Ideas 21327 Typewriter helped her understand what it means to be an adult fan of LEGO.

We’ve been building 21327 Typewriter from the Ideas range this week on Relax With Bricks. It was a set I was initially sceptical about – it’s for display rather than play, and I wasn’t convinced we’d get much mileage out of it on the entertainment front while filming. How wrong I was. It’s been an absolute triumph.

Typewriters were invented in 1874, but would take another decade to become widespread. Touch typing began to be taught in schools, words-per-minute became an enviable skill and although they have now been replaced by computers and laptops and iPads, the keyboard we all use today remains pretty much unchanged (bar all the new-fangled bits and bobs).

For those of you of a certain age, you will remember what we all had to go through when we used typewriters: the inky ribbon, the letters getting stuck, having to not drip Tipp-Ex into the mechanism or, if you had a fancy typewriter eraser (Google them, they are a thing of beauty – the best ones look like medals) remembering to do your rubbing out over the edge of the desk.

In short, the whole thing was an absolute faff. But two things I do miss – the lovely clack of the keys, and the satisfying swoosh of the carriage as you pushed it back to the far right of the paper – could never be replicated in something made of LEGO, right? Wrong!

The Ideas range from LEGO has been nothing short of brilliant – they’re the perfect sets for adult fans – not least because it’s a wonderful opportunity for amateur brick fans to see their builds go into production, and the typewriter is an inspired choice.

The designer of 21327 is Steve Guinness, a schoolteacher from Chester, and although the finished product has been tinkered with by the LEGO design team, it’s as true to the original concept as can be. They’ve broken down vintage technology and combined it with LEGO building techniques to create something irresistible.

James May, one of the LEGO designers who worked on the set, explained that one of the main additions from the LEGO team was to create a rotating platen that allows for paper to be fed through the LEGO typewriter. Not only that, but they added a lever to change ink colour, a manufacturer’s label, an escapement where key arms meet metallic tiles, and lastly, a textile ribbon.

I’m a little shy of technical builds, not least because I have to read, sing and remember accents as I’m dealing with club business (messages from the community) when I film, and so I’m always a little concerned I’m going to miss a step or misplace a brick. Luckily the AFOLWACs (Adult Fans of LEGO Who Are Chums) have my back, and if I do manage to make a mistake and not spot it, I can rely on them to tell me the next day, so it’s never too tricky a fix.

Thankfully, with 21327 Typewriter, I was so terrified of mucking up the guts of the mechanism that my concentration levels were through the roof, reading or not, but what I have really loved about this set is not just how clever it is – the keyboard keys are a work of art, the way they have managed to replicate the noise of a typewriter is mind-blowing, and the movement of the rear carriage is beyond belief – but how much the AFOLWACs and I have enjoyed building it.

There is something truly wonderful about a pile of bricks transforming themselves into a thing of beauty. I posted a short video of where I was up to in the build on to my non-LEGO Twitter account – I sometimes do this when I’m building something exceptional and want to open it up to civilians – and had wanted to show the inner workings before I built the casing that would cover them up.

I had lots of messages, mostly from people bamboozled that this was LEGO they were looking at, but one non-AFOL replied asking what was the point of building a typewriter that didn’t actually work. In that moment, I had a clear understanding of what being an AFOL is – it’s all about the build, my friends. It’s all about the builds.