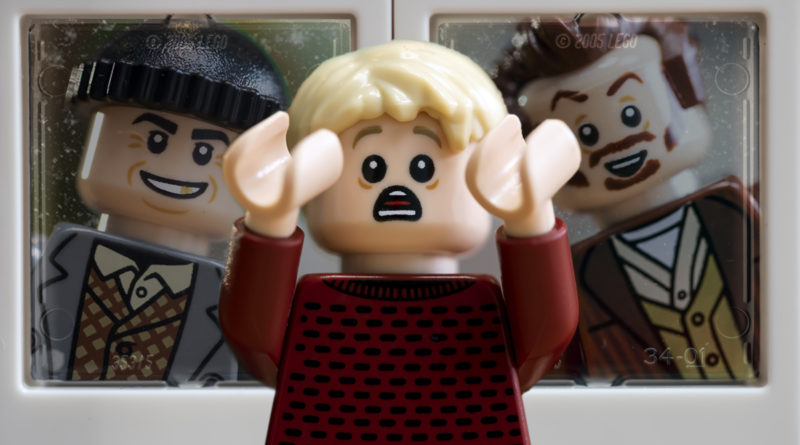 It’s the biggest LEGO Ideas set to date, but is 21330 Home Alone’s impressive piece count put to good use as a worthy homage to a beloved Christmas movie?

There are certain things that just seem synonymous with Christmas: presents, an abundance of food, an overweight old man coming down the chimney and – if you happen to be a child of the ’80s – Home Alone. It’s not only regarded as one of the best Christmas films of all time, but it’s also hailed as one of the greatest slapstick comedies ever made.

The zany ‘cartoon brought to life’ catapulted child actor Macaulay Culkin into the cinematic stratosphere and further cemented Joe Pesci as one of Hollywood’s finest actors, just as capable of portraying a terrifying gangster as he is playing a goofball criminal in a beloved comedy.

For those of you who haven’t seen the film, of which there can’t be many, the plot revolves around eight-year-old Kevin McAllister, who’s been unwittingly left home alone during the holidays while his entire family go on vacation to Paris – a situation that’s made ten times worse by the fact there are two local burglars, Harry and Marv (also known as the Wet Bandits), who’ve scoped out the house as a potential target. It’s up to Kevin to protect his family home against the intruders by setting up countless and increasingly complex traps.

As the title of the film suggests, most of the action of Home Alone takes place in the McAllisters’ house, and it’s this location that forms the basis for 21330 Home Alone. The large family home, rear kitchen and utility room, Kevin’s tree house and the Wet Bandits’ 1986 Dodge Ram Van are all included, making this the largest LEGO Ideas set to be released so far – but as the old saying goes, does bigger mean better?

Open the box to 21330 Home Alone and you’ll be greeted by a heavy instruction manual, complete with Kevin’s ‘battle plans’ on the front cover – a great touch. Inside is the usual detailed introduction delving into the source material and design process, with interviews from both the LEGO design team and fan designer Alex Storozhuk. There are 30 bags numbered one through 24, which contain the 3,955 pieces used to construct the McAllister household, Kevin’s tree house and the Wet Bandits’ van, which is the first thing you’ll be tasked with constructing.

Although this wasn’t an original element of Alex’s submission, it feels entirely appropriate to include it within the set as it’s such a prominent vehicle seen in the first act of the film, and while this build doesn’t exactly scream realism, there’s a stylised quality to it that is really appealing.

With the van done, it’s on to the main build, the large and wonderfully-detailed McAllister home. Due to its size, this portion of the build does start off fairly slow. While some Ideas sets offer up innovation right from the off, 21306 The Beatles Yellow Submarine or 21108 Ghostbusters ECTO-1 being two examples, 21330 Home Alone takes a while to get going. That’s not to say this is a set lacking in inspiration, though, because once it picks up speed, it’s an incredibly enjoyable experience.

One of the joys of a LEGO Ideas set is discovering the way the fan designers tackle common, everyday items. Each set feels like it has its own unique take, and 21330 Home Alone is no different. The two beds are excellently designed: Kevin’s parents’ features a partly-made duvet achieved using a 3×2 wedge plate and 1×2 sloped curves, whereas Kevin’s brother Buzz’s bed achieves the same effect using a 2×2 modified triangular tile, complementing a 2×2 modified brick with curved top.

The lamp is brilliantly constructed from a round 2×2 dome bottom and 2×2 flower piece, and the wash basin with iconic mirror is an exceptionally smart design, reversing the directions of the studs twice over: first flipping over a 3×4 wedge to create the sink, and then using 1×1 brackets to build up the detail next to the mirror.

The washing machine, gumball machine, Kevin’s desk and battle plans are also equally fantastically designed. In fact, at pretty much every stage you’ll be taken aback by just how smart the parts usage is. Need some detail for the mantlepiece? R2-D2’s legs will do the trick. How about some rungs for a treehouse ladder? Why not use battle droid legs instead. Or – a personal favourite – the black sausage that’s used for Kevin’s desk lamp.

Not every design is a winner, and a few areas don’t quite work. The dining room chairs in particular are odd, using small barb claws for the legs. They don’t look that accurate (one of the rare elements to not capture the essence of the film) and because they aren’t attached to anything, just placed loosely on to tiles, they slip and slide around frustratingly. But in a set with nearly 4,000 pieces, to only quibble about the chairs is a pretty impressive feat – and let’s be honest, it’s not often that any set gets the chairs right anyway.

Negatives aside, the outside has just as much creativity poured into it as the inside. The entire structure is built like one giant doll’s house. The front sections are built on hinges and placed over tiles so they can easily fold in and out, allowing for access to the interior. Festive details are included on the inside of the folding walls, making the model attractive to display closed up or opened all the way.

The way the sloped roofs on top come together is incredibly unique; the detailing around the front door looks very authentic; the extra lights strewn over the front adds a nice Christmas aesthetic; and the large hinged roof that reveals the attic space comes together in a very pleasing way.

The back of the house is built over two smaller floors. The utility room sits downstairs, complete with a brick-built washing machine and boiler room monster that freaks Kevin out, recreated here with a light brick. Upstairs is the kitchen, featuring a new mould for the door and includes ‘Angels with Dirty Faces’ (or should that be ‘Minifigures with Dirty Faces’?) playing on the VCR – kids of a certain age might need to ask their parents what on earth a VCR actually is.

The back connects via Technic pins, with the only downside being the extra depth it creates, making it much harder to display. Kevin’s tree house is also included and attaches to the main building via string with studs on the end. It’s a small build, but one that adds further accuracy to the completed model.

While the build is certainly an enjoyable experience, with a plethora of brilliant touches spread throughout, it’s the multitude of play features that really brings this set to life and places it firmly in the world of Home Alone. In fact, this set wouldn’t really work without them – it’s the booby traps and surprises that Kevin conjures up to battle against the Wet Bandits that makes the film so memorable, and nearly all of them are included here: the falling iron; the icy stairs; the paint pots thrown down the stairs; the flamethrower on the door. There’s even the Michael Jordan cut-out that Kevin uses to fool the bandits into thinking his house is full of partygoers, although here it’s designed to look like the LEGO minifigure version of ‘his airness.’

Finally, there are tonnes of Easter eggs and references hidden throughout, and it would spoil the experience somewhat to list them all, but fans of the film will be in for a real treat – especially if they look in the rubbish bin outside the back door. (If only Kevin’s parents had done the same before they set off on holiday.)

Five minifigures are included, all of which are exclusive and add to the level of authenticity that oozes throughout this set. Kevin comes dressed in a winter sweatshirt and small plain trousers, which are poseable. He has two face prints, with one recreating his famous scream.

The hapless Wet Bandits Harry and Marv both look very accurate to their on-screen characters, dressed in appropriate attire. Harry comes with his trademark beanie (and police cap disguise) but only has one face print, presumably because the beanie wouldn’t cover an alternate print, while Marv has one of the best alternative faces we’ve seen in ages.

Kevin’s mum, Kate McCallister, and ‘old man’ Marley make up the rest of the minifigures. Both have decent printing on the torsos, but none on the legs. Marley just has the one face print, while Kevin’s mum’s face is double-printed: one side is smiling and the other is screaming, presumably after discovering Kevin is missing. These two minifigures are fine, but it’s really the Wet Bandits that are the stand-outs.

Now, you don’t have to be a currency conversion expert to realise that fans in the UK have got a really bum deal out of this set, and it’s hard to pinpoint the reason why. Home Alone was a global smash at the time of release and is a firm family favourite right across the globe, so it seems strange that the US has such a better deal out of it.

That being said, when compared to other similarly-sized licensed sets, 21330 Home Alone actually seems like quite a good deal regardless of your location – but whether casual fans of Home Alone or LEGO would be willing to fork out that much is another matter entirely.

21330 Home Alone has clearly been a labour of love for fan designer Alex Storozhuk, and his passion for the source material shines through. It’s packed full of so many references to the film that it’s hard to work out if any have been left out. The building techniques and parts usage on display are absolutely sublime, and some of the most inventive that an Ideas set has offered in a long time.

What’s more, the finished set is an absolute joy to behold, and even more fun to play with – something that’s not often said about an 18+ set. There are levers, buttons and knobs spread across almost every section of the model and pressing, turning or flicking them will result in some pleasing play feature being activated. Inside the build itself are even more traps to play with, so that by the end of it all you’ll feel just like eight-year-old Kevin.

The only negative about this set is the price, which will likely put a lot of fans off – especially in the UK. There’s so much to enjoy in 21330 Home Alone that if you do decide to purchase it you definitely won’t be disappointed, but it’s also completely understandable as to why you might give this one a pass, as LEGO Ideas sets continue to get increasingly bigger and more expensive. It’s a shame, as Alex and the LEGO design team’s wonderful techniques deserve to be experienced by as many fans as possible.

How long does it take to build LEGO Ideas 21330 Home Alone?

21330 Home Alone contains 30 numbered bags for fans to work their way through. You can expect to set aside around seven to eight hours of building time to complete everything the set has to offer.

How many pieces are in LEGO Ideas 21330 Home Alone?

21330 Home Alone is the largest LEGO Ideas set so far and contains an impressive 3,955 pieces.

As mentioned, 21330 Home Alone is the largest LEGO Ideas set currently on the market by piece count, but it’s far from the largest LEGO set of all time in physical size, measuring in at 34cm wide, 27cm high and 34cm deep.

How much does LEGO Ideas 21330 Home Alone cost?