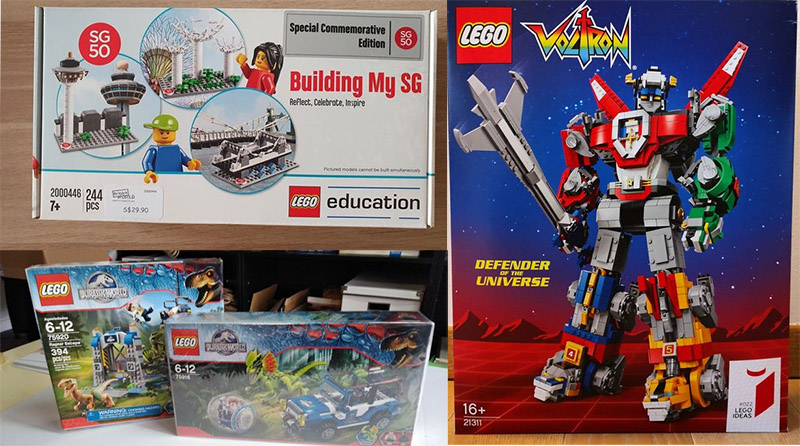 There’s an opportunity to grab some of the sets that got away – including LEGO Ideas 21311 Voltron, LEGO Education 2000446 Building My SG and 2015 LEGO Jurassic World sets – in a new round of Catawiki auctions.

Fans will be keen to cast an eye over this week’s new offerings, including a selection of sets that will make fellow collectors envious. For a genuinely hard to get set there’s Singapore exclusive 2000446 Building My SG, for a retired treasure there’s 21311 Voltron and for a ‘one that got away’ there’s a pair of original Jurassic World sets.

The LEGO Group has promised that there will be no more regional exclusives – that means that themes like LEGO Monkie Kid are not just available in China as intended but are also open to fans around the world. That’s only a recent ruling though, so there are plenty of past regional exclusives for fans to track down.

One such set that will appeal to collectors was only available in Singapore. 2000446 Building My SG was given out by the Singapore Ministry of Education in 2015, with every schoolchild in the country encouraged to build their own vision of the future with the set. Some were also available to buy, with the ‘Special Commemorative Edition’ label noting the 50th anniversary of Singapore’s independence.

Although the set is only 244 pieces and includes two fairly plain minifigures, the unique nature of its release and the limited availability makes it one for the serious collector who likes to own unusual products that other fans haven’t even heard of.

Those looking for something a bit better known might be more partial to 21311 Voltron, the incredible set that retired from the LEGO Ideas theme and shot up in value. LEGO Ideas sets have a pesky habit of disappearing from shelves suddenly, with Voltron being one of the worst offenders so far.

It’s partly because the set is so impressive, offering five buildable mechs that combine as one, and partly because there are so many die hard Voltron fans who simply had to have a LEGO version that this particular set became scarce as soon as it was retired.

Those who missed out should consider bidding on the current Catawiki auction for a copy of the model, as the price is only likely to appreciate as more collectors get hold of the sealed boxes and open them to enjoy the very special build process themselves.

In 2015, a franchise returned to cinemas to play on nostalgia and along with it came an epic toy line that fans couldn’t get enough of – not Star Wars: The Force Awakens, but Jurassic World. Children snapped up the toys quickly, and by the time collectors realised what they had missed, they were extinct. An auction at Catawiki is currently offering 75916 Dilophosaurus Ambush and 756920 Raptor Escape bundled together.