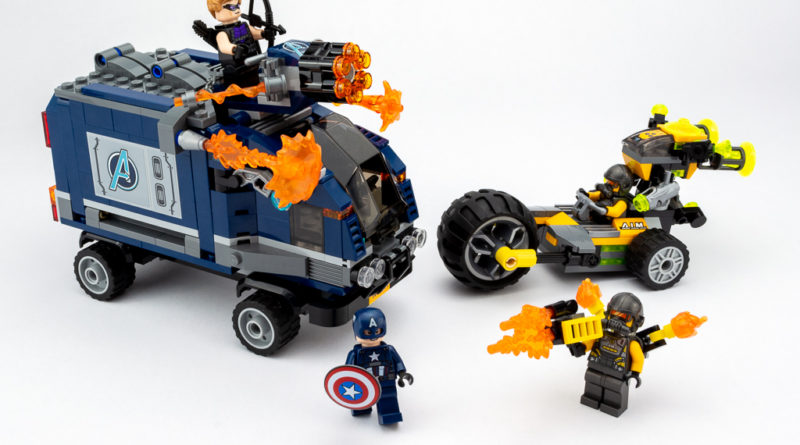 An Avengers set inspired by an upcoming video game might be a bit of a gamble, but can a fresh non-film related tie-in like 76143 Avengers Truck Take-down be what LEGO Marvel needs?

With the Marvel Cinematic Universe’s (MCU’s) Avengers currently enjoying some rest and relaxation after the conclusion in 2019’s Avengers: Endgame, LEGO has drawn inspiration from an upcoming and hotly anticipated Avengers video game for many of the Marvel sets this year.

76143 Avengers Truck Take-down is one such set in the range, which features an assortment of vehicle based models and some new minifigure designs. Four of those minifigures are included here.

Captain America and Hawkeye are #teamgoodguy with two A.I.M soldiers are fighting for #teamdisposablehenchmen. As usual with modern LEGO designs, the minifigures look great, and it’s especially refreshing to see a non-MCU variant of Hawkeye finally make an appearance in a LEGO set.

Cap’ comes with a double-sided print for his face, one side featuring a chin strap to complement his helmet, while the other works well with his hair element, which is also provided in this set allowing for alternating looks. His shield element is also the new dark bley version with the black ring outline, making the iconic target design pop out more. The legs have no printing but the torso more than makes up for that with a fantastic amount of detailing on both the front and back, peppered with nice silver accents.

Hawkeye also has a double-sided face with only the mouth expression changing underneath his stealthy eye-ware. Again, the graphic designer has given the torso plenty of interesting detail, though unfortunately the back is predominantly covered by his quiver.

The two A.I.M soldiers in 76143 Avengers Truck Take-down feature identical printing on their heads and torsos but their unique accessories enable them to stand out from one another. One carries what I believe represents a fuel backpack to go with the pretty intimidating flamethrower, but a few elements are adjustable so maybe you’ll choose to believe it’s a jetpack too. Why not?

I appreciate the inclusion of more trans-orange power elements since they add a lot more play potential for kids and add a dynamic feel to a static model. The other soldier might not be quite as heavily accessorised on his own, but he does get his own trike and drone – so he’s clearly the favourite back at bad guy HQ, much to the chagrin of his flame-throwing colleague.

The trike is a small and simple build featuring an enormous tyre at the front making use of the new wheel element in flat silver (only available in two other sets at time of writing). It might look fairly well-equipped with weapons flailing out at every angle but actually the top section is revealed to be a remote-controlled drone that can be used against our heroes. It’s a well-constructed model like one you might find in a polybag and makes smart use of the new-ish Harry Potter lantern elements for the fuel exhausts. My only grumble is the drone’s clutch to the trike relies on a single stud connection, allowing it to get easily knocked off.

The main build of 76143 Avengers Truck Take-down is, well, the truck itself. I have a few problems with the overall aesthetic of the vehicle.

On first glance it’s just a bit of an ugly dark blue box with tiny wheels and a couple of Avengers stickers on the sides (thankfully there are only nine stickers in this set which isn’t too ridiculous and includes a nice nod to the LEGO designer Mark Stafford on the vehicle registration plate).

I’m not a big fan of the cockpit canopy at the front, but the hinged opening allows for easy access to place a minfigure in the driver’s seat. It’s flanked either side by moveable claw arms with more flame-throwing weaponry above them, though it’s purely for visual appeal as they can’t be fired.

I did, however, find myself pleasantly surprised at something I didn’t expect and that’s that it’s actually really fun to play with. As an AFOL, physically playing with LEGO isn’t usually as important as is it to a child. Yet this set caught me off guard by how fun it was that I immediately had to find my wife to show her what I’d just built.

There’s a fairly inconspicuous lever at the rear of the truck that when pressed down, pops open the side panels to reveal a multi-round stud shooter. This can be raised and lowered with a smooth lift-arm action, though care needs to be taken as I found it prone to coming off if you pull too hard.

The touches that really made this for me are the fact that when fully deployed, the truck panels can be neatly closed again with the shooter now on the roof. The extendable arms to make a cross-bow shape is also a very nice addition, no doubt approved by Hawkeye at Avengers HQ. It’s a shame it can’t be rotated at all, but I’m sure it could be implemented if a builder wanted to.

From the photos alone, I really wasn’t excited to build this set. However, once I did I was actually quite enamoured with the playability of the set (as was my two year old son) and how smoothly the mechanism works.

76143 Avengers Truck Take-down is a decent set with a reasonable price-to-piece ratio. It has fun play features and a good amount of minifigures – if you can get it discounted, then it might just keep a younger fan very happy indeed.

76143 Avengers Truck Take-down is available now at LEGO.com. You can help support Brick Fanatics’ work by using our affiliate links. 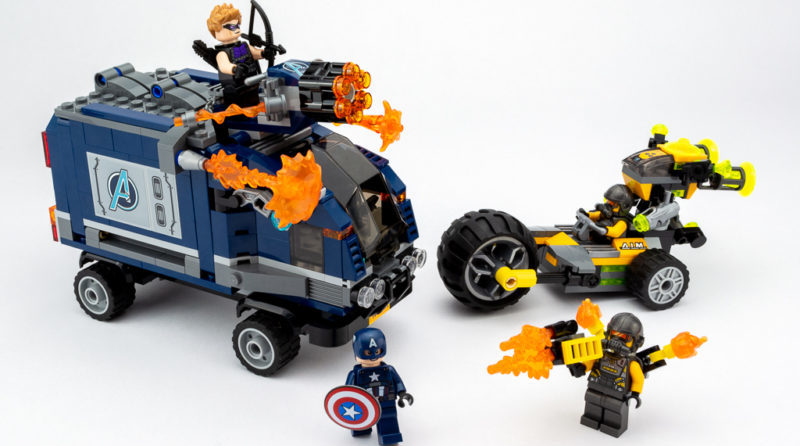