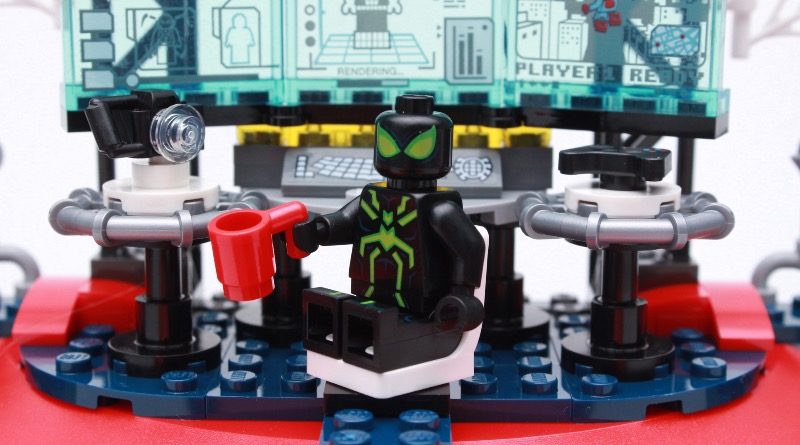 Spider-Man gets his own headquarters in LEGO Marvel 76175 Attack on the Spider Lair, but forgets to bring anything worth recommending along with him.

Imagine if Spider-Man had a Batcave. Now imagine that Batcave had a basketball hoop, a skateboarding ramp, a video game console and huge, novelty cobwebs next to its suit display and definitely-ethically-sound prison cell, and you’re halfway to realising the LEGO Group’s vision for 76175 Attack on the Spider Lair.

The other half comes in juniorising that Batcave to the point that it makes you question the purpose of LEGO as a toy, and charging you the equivalent of Bruce Wayne’s fortune to take it home. You don’t need Spidey-sense to suss most of that out from the official images, though, so does 76175 stack up any better in the flesh?

Why do you buy LEGO sets? Why do your kids ask for LEGO sets, over any other lump of plastic? The core difference between 75288 AT-AT and Hasbro’s Super Deluxe AT-AT Walker is pretty simple: you get to put one of them together. You can still use it to stomp around the icy plains of Hoth, or whichever available floor space in your home you choose to substitute for that desolate landscape, but there’s an entire process before you get to that point that adds an incredible amount of value to the toy you’ve just purchased. And when you’re done, you can take it apart and build whatever else you like.

That’s essentially what sets LEGO apart from every other toy on the shelf, but it’s not a quality that 76175 Attack on the Spider Lair can be described as possessing. From the moment you open the box and just four numbered bags pour out, the first two of which contain some seriously enormous elements, it very quickly becomes clear that 2021’s most expensive Marvel set so far has basically eschewed the build experience entirely in favour of play.

It’s not a criticism you can fairly level at every LEGO set: there’s only so much building you can do in a Star Wars battle pack, for instance, or to give a more relevant example, one of this year’s Marvel mechs. But those models come in at under £15 for a reason. By comparison, 76175 Attack on the Spider Lair commands an eye-watering entry fee of £69.99 in the UK. We’ll touch more on the price later, but it’s impossible to discuss the build without the context of what you’re paying for the privilege of experiencing it.

Unless this is your first LEGO set in years (and if you’re considering coming back into the fold, there are far, far better ways to do so), or you’re within the ballpark of the 8+ tag on the box, the entire build will take you roughly an hour to complete. That’s 60 minutes, for those playing along at home. For £70. Okay, okay, we’ll ignore the price for a moment and focus on the build, or what little of it there is.

Spider-Man’s lair shares plenty of DNA with 2019’s 76122 Batcave Clayface Invasion, from its central multi-screened computer terminal to its side sections, prison cell and vehicles. But everything’s much smaller here, and far more junior by comparison: it’s built across a single level, the bulk of the size is created by a handful of huge parts, and the whole thing just comes across as half-hearted.

The basketball hoop and skateboarding ramp do feel relevant for teenage Peter Parker, and are a nice contrast to Batman’s deadly-serious gym and weapons rack, but they’re really nothing to put together.

Still, there are pockets of fun to be found – the Green Goblin’s glider is a decent build, anchored around a pair of A-plates, while the stickered screens are packed with detail (even if they are a pain to align). But these examples are so few and far between that we’re struggling to think of a third, perhaps beyond the pool of dark blue 2×4 tiles, but nobody should be buying this set for the parts unless it’s at a deep, deep discount.

The end result is a comparatively tiny set that will really make you question why you’ve bought it in the first place. For kids, there’s plenty of play to be had, and maybe that’s the point – it is a toy, after all. But is that enough to separate 76175 Attack on the Spider Lair from all the other Spider-Man toys stuffing store shelves? Shouldn’t a LEGO set offer something more? Because this doesn’t.

There are six minifigures in the box, which sounds pretty good for a Marvel set. And, to its credit, three of them are brand new and exclusive: the ‘Big Time’ variant of the Stealth Spider-Suit from Marvel’s Spider-Man for PS4 (the set description refers to a ‘PlayStation’ among Pete’s many monitors, but there’s no physical game console), a fresh take on Green Goblin, and – more interestingly – what appears to be Ben Reilly, a Peter Parker clone known in-universe as Scarlet Spider.

They’re all cool minifigures, and more Spidey variants are always a big plus, but none of them are set sellers in and of themselves – particularly when bundled into a set this expensive, and otherwise lacking in basically every department. The other four minifigures arguably feel like filler: we’ve seen Iron Spider and Venom before (you probably have a Venom army by now), and while Spider-Man himself has new-for-2021 arm printing, you can cop the same character in much cheaper sets. Dual-moulded legs would have gone a long way here (click here for the proof), but that’s apparently asking way too much of a £70 set.

To add insult to injury, one of the monitors makes a reference to the Super Fantastic Four Costume (perhaps better known as The Bombastic Bagman), a disguise Peter Parker was forced to don after Reed Richards (or Mr. Fantastic) separated him from the alien symbiote, leaving him to swing home without a costume. A physical version of that outfit would have been a perfect addition here, and giving us our first and only Fantastic Four costume as part of a different character sounds exactly like the kind of frustrating thing the LEGO Group would do anyway.

Even if that was out of the question, swapping out Venom for just one brand new villain would also have sweetened the deal. Or even Green Goblin, who we’ve had several times before, even if this is a new version. As it is, there are only really two minifigures here worth your time – at least if you own any other Spider-Man sets. If this is your one and only, well, let’s face it: there are way better options for your first dive into the Spider-verse.

This is the one you’ve been waiting for. If you’re this far into this review, you already know that the price tag slapped on 76175 Attack on the Spider Lair feels nothing short of daylight robbery, because we’ve already mentioned it – oh, just once or twice.

Maybe you don’t subscribe to the old ‘price-per-piece’ methodology for determining value in LEGO sets. Maybe, just maybe, you can overlook the fact that you’re only getting 466 pieces here for £69.99 / $69.99 / €79.99. After all, some of those pieces are pretty massive, so you’re technically getting a fair bit of plastic. But what use will you really have for those huge red 10×10 sloped corner bricks? And what are they really bringing to the table in this set, beyond artificially inflating its still-diminutive size?

Given the choice, we’d have preferred smaller elements to build up a more detailed lair, and actually provide some semblance of construction to this, erm, construction toy. Would that have changed the cost? Not likely, but you might have felt like it was at least a little bit better value for money. As it stands, the only way 76175 Attack on the Spider Lair would feel worth its RRP is if it was the sole LEGO set in existence. (Or if the only other one was 75286 General Grievous’s Starfighter.)

Giving Spider-Man a lair feels like a pretty solid premise. Peter Parker technically had a defunct one in Spider-Man: Into the Spider-Verse, and the LEGO Group has shown it’s not averse to taking its cues from the highly-acclaimed animated movie. Plus, it makes for a nice change from the armada of pointless vehicles the web-slinger has been saddled with over the past few years. Unfortunately, it almost completely fails in its execution.

Maybe we would have been more generous to 76175 Attack on the Spider Lair if it was, say, £25 cheaper. At £45, it wouldn’t feel too heinous, particularly with six minifigures in the box. You could even almost excuse so many of those characters being straight repeats. But at £69.99, it’s just impossible to recommend. All it has to offer beyond its exclusive characters is playability, and if that’s all you (or your kids) need from a toy, you might want to seek out something cheaper than a LEGO set.

Support the work that Brick Fanatics does by ordering your LEGO Marvel sets (even if they’re this one!) through any one of our affiliate links.