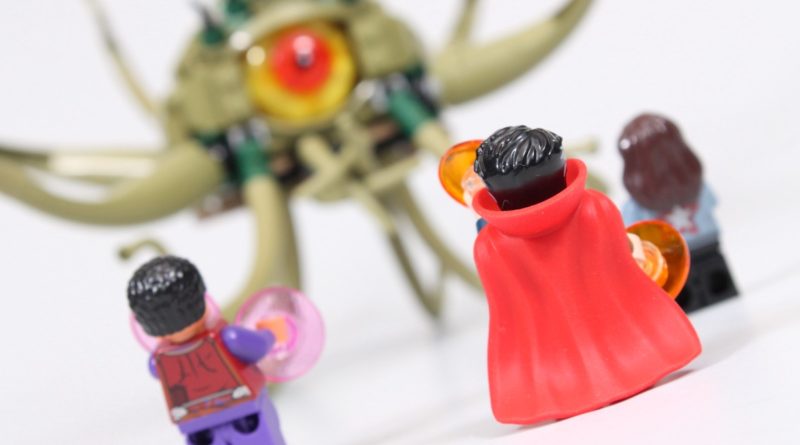 Doctor Strange takes us back to 2015 in LEGO Super Heroes with 76205 Gargantos Showdown, a Marvel set that’s all tentacles, no filler.

Remember 76040 Brainiac Attack? An early example of the LEGO Group just getting everything right in a LEGO DC set, 76205 Gargantos Showdown evokes its tentacle-waving predecessor in all the right ways. It’s a pocket money-priced set that devotes its entire part count to its main build; it includes a killer cast of minifigures; and – crucially – it brings something completely new to the table in a theme that’s already a decade old. (How did that happen?!)

That’s the short of it, but keep reading for the long – or, why 76205 Gargantos Showdown might just be your new favourite LEGO Marvel set.

If you did happen to be collecting LEGO Super Heroes sets back in 2015, you probably already know that there are few better compliments we can pay to a sub-£25 set than comparing it to 76040 Brainiac Attack. That set drew on hyper-specific source material in LEGO Batman 3: Beyond Gotham, TT Games’ third instalment in its Batman video game franchise, delivering a zany vehicle that could have leapt straight off a comic book page as much as a TV screen.

It also packed in four equally-desirable minifigures in Superman, Supergirl, Martian Manhunter and Brainiac, and all for just £24.99 at retail. That 76205 Gargantos Showdown manages the same feat seven years later with more pieces – albeit smaller ones – and only one fewer minifigure is an achievement in and of itself. But that isn’t enough to explain why this first (but perhaps not only) Doctor Strange in the Multiverse of Madness set is worth your time.

After all, a few good minifigures and a part-heavy build are only a couple of ingredients needed for the perfect LEGO Marvel recipe, and we’ve seen plenty of sets that have relied heavily on the first of those, failing to add the crucial finishing touch: a unique, imaginative and fun design. The LEGO Super Heroes team was obviously aided here by the source material, but choosing this ball-shaped baddie over, say, another truck or a pair of motorbikes (standard and dull superhero fare) was wise.

Gargantos (or maybe Shuma-Gorath? We’ll have to wait for the movie to find out one way or the other) is, according to the Marvel Cinematic Universe Wiki, hell-bent on stealing America Chavez’s powers in order to gain control of the multiverse. Communicating that motive through the lens of a LEGO set isn’t really possible, but what is clear from this characterful design is that Gargantos means trouble. Just look at that eye, for starters. And those tentacles.

All of 76205 Gargantos Showdown’s 264 parts (beyond its minifigures) go into recreating its eponymous, bulbous mischief-maker, which allows it to quickly take shape as a sprawling, menacing morass of tentacles, clamped to a sort-of-spherical core that involves a satisfying mix of studs facing in all directions. You’ll build out from a fixed central point in a way that could threaten to be fiddly, or at least cumbersome, but the set thankfully skirts around that particular reality.

So imbued is this buildable character with, erm, character, that you’ll immediately want to start exploring all the different ways in which you can pose it wreaking havoc on 76205 Gargantos Showdown’s trio of superheroes. The attachment points at the end of its tentacles create a playground for plenty of potential display options, although it feels ever-so-slightly hampered by the symmetry of the beast’s limbs, and their range of movement.

The absence of one of those issues would have resolved the other, but that they’re both here in tandem does limit things a tiny bit.

It’s a pretty minor inconvenience, though, and one we only really discovered the extent of while photographing 76205 Gargantos Showdown. If you’re not planning to twist, bend and move the model much – let’s say you’re popping it on display, and might rearrange it once in a while – you won’t really have much to grumble about.

Much has also been made of the set’s apparent ‘design flaw’, which involves a pair of 1×2 ball joint receivers not sitting completely flush with the mudguard piece that forms Gargantos’s lower eyelid. In practice, it’s essentially a non-issue – it doesn’t prevent the set coming together at all, and chances are you won’t really even notice it. Whether it will have any long-term impact on the elements involved is another question, and a legitimate one, but it’s hard to say at this stage.

And that aside, there’s very little to complain about here. It’s as engaging a build as you’ll find at this price point across both Marvel and DC Super Heroes, and offers something completely different in the current portfolio for either theme.

The beauty of devoting a set’s entire part count to what’s effectively a buildable character – and an antagonist at that – is that it frees up precious minifigure slots for characters we actually care about. There are no filler baddies here, in the same way we’ve seen other comic book and movie Marvel sets padded out with A.I.M. agents or Chitauri soldiers.

Instead, 76205 Gargantos Showdown delivers a trio of minifigures that each bring something worthwhile to the table. Doctor Strange’s new cape element is a coup for anyone yet to grab it in 76185 Spider-Man at the Sanctum Workshop; Wong’s new outfit is far more fitting of his character than the last one; and America Chavez feels fresh as a character in spite of her comparatively bland design.

If there’s any criticism to be made, it’s that America Chavez’s hair isn’t a perfect match for the on-screen character – a problem exacerbated by the fact the live-action version is right there on the box art – and that her rainbow-decorated 1×1 tile, referencing the character’s sexuality, is completely missing from the set’s packaging. What gives, TLG?

There’s no two ways about it: £24.99 / $29.99 / €29.99 is a very good price for one of LEGO Marvel’s best sets in recent memory, with not a single of its 264 elements wasted and three high-profile, non-filler characters. You should have no qualms about picking up 76205 Gargantos Showdown at full price.

Shrugging off the shackles of most recent Super Heroes sets at this price point, 76205 Gargantos Showdown feels like LEGO Marvel liberated: a trio of genuinely desirable minifigures that aren’t the only reason to buy, anchored as they are to a build that’s absolutely worth the entry price alone to experience.

If you’re coming to this review a few weeks after publication, having already seen Doctor Strange in the Multiverse of Madness, you’ll have all the context you need for the set’s antagonist. But even without that, 76205 Gargantos Showdown is one LEGO Marvel set you shouldn’t miss.

How long does it take to build LEGO Marvel 76205 Gargantos Showdown?

You’ll need to set aside roughly 40 minutes to put together 76205 Gargantos Showdown. It’s an engaging and involved build for the price tag.

How many pieces are in LEGO Marvel 76205 Gargantos Showdown?

76205 Gargantos Showdown includes 264 pieces, all of which are put into ensuring its main model is as good as it can be.

76205 Gargantos Showdown’s size is variable given all the ways in which the beast’s limbs can be displayed, but at full stretch it’s around 31cm wide, 26cm deep and 12cm tall. You can mix that up a bit to fit whatever display space you have to hand.

How much does LEGO Marvel 76205 Gargantos Showdown?