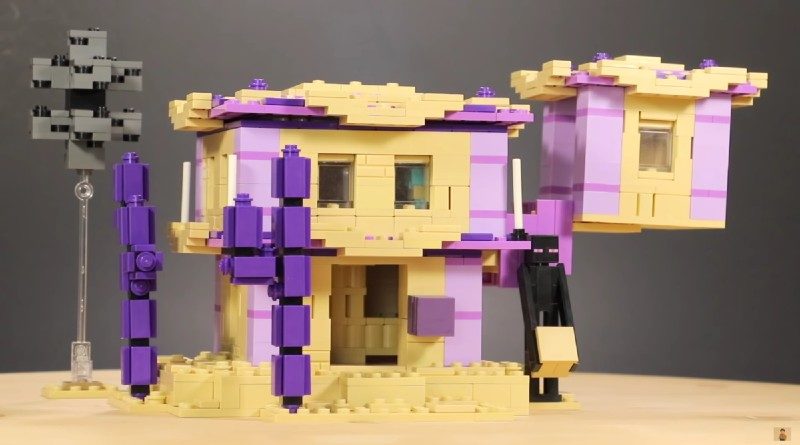 A LEGO builder is tackling one of Minecraft’s extra-dimensional features in a new model that combines parts of the 2021 sets and the oldest Minecraft model.

TD BRICKS is recreating part of Minecraft’s End dimension in a build that features elements from the theme’s history, even reaching back to the first LEGO Minecraft set.

For the unaware, Minecraft’s end dimension features naturally-spawning, towering structures known as End cities. They appear on islands floating in an endless void and are considered one of the more dangerous parts of the game to explore. Thankfully, this MOC is slightly safer to explore.

The main part of the build is a structure connected to the ground with tan walls and lavender corner beams, which TD BRICKS mentions were an expensive element to acquire. Inside the building are a few custom blocks such as an ender chest, which has yet to see an official LEGO version. On the outside some chorus fruit trees grow, their unique design captured with some purple tiles and black SNOT bricks.

Attached to the main structure is a separate tower that floats off the ground. Any would-be adventurers will need to take care when exploring though as a Shulker lurks in disguise. This particular enemy will cause players to float when hit by their projectiles, and hide in tough shells. These are built using the original Steve eye print from 21102 Minecraft Micro World: The Forest, a piece that is almost 10 years old.

It’s not just the past that this MOC references, however, with the new Elytra pieces from 21165 The Bee Farm included as a treasure to find within the End city, the only place that they can be found in-game. For those wanting to recreate their own version of this structure, 21165 The Bee Farm is available now for £17.99 / $19.99 / €19.99.