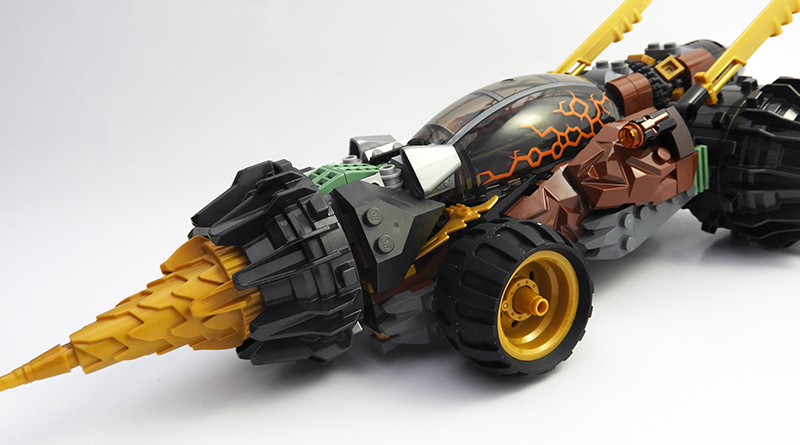 A classic LEGO NINJAGO set is re-imagined in 70669 Cole’s Earth Driller – does it manage to live up to, or even improve on, the original?

The original version of Cole’s Earth Driller only included the driller, Cole and a single Stone Swordsman minifigure. This new, re-imagined set packs a lot more punch as the driller has had a serious overhaul, the set includes more minifigures, and finally we have the inclusion of the Giant Stone Warrior. 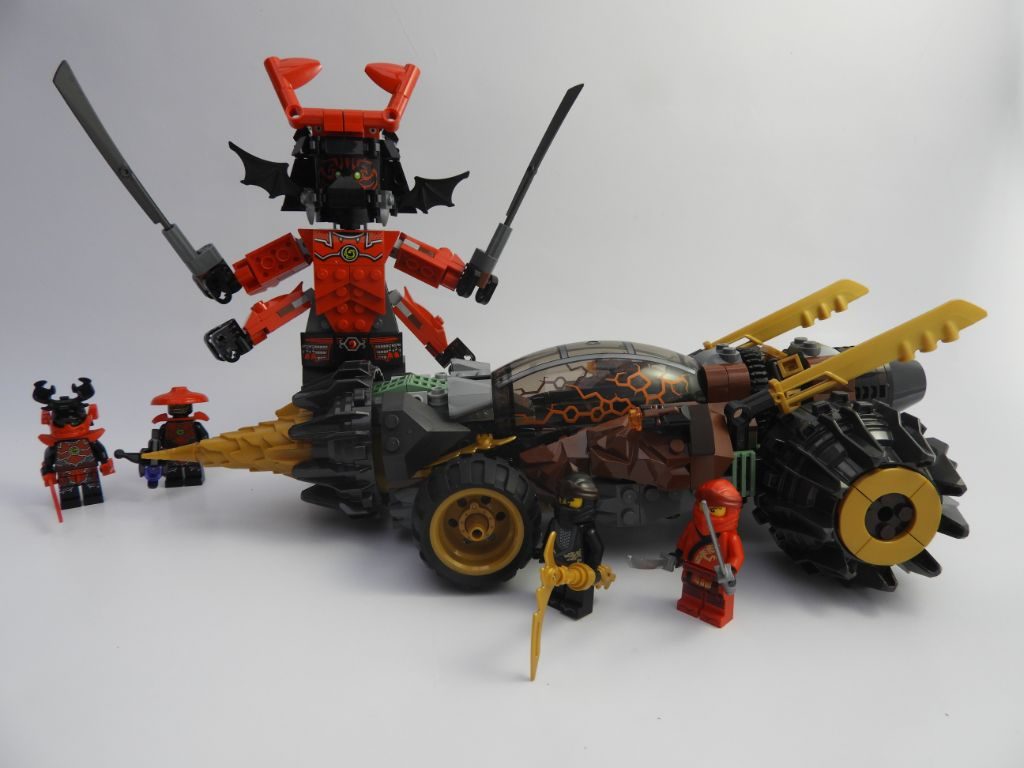 This is one of four sets in the NINJAGO Legacy theme that contains one of the collectable Golden Weapons, in this case you must try and reclaim the stolen Scythe of Quakes. The other three weapons are distributed across 70667 Kai’s Blade Cycle & Zane’s Snowmobile, 70668 Jay’s Storm Fighter and 70670 Monastery of Spinjitzu.

Starting with the villain minifigures, the set includes two adversaries – a Stone Army Scout complete with a great stud shooter crossbow and a Stone Army Warrior who is ready for battle with two katanas. Both are wonderful but the Warrior’s helmet makes this minifigure my clear favourite.

Kai and Cole and both great minifigures and include dual printed heads. Kai is armed with two katanas and Cole is unarmed until the point at which he successfully reclaims the Scythe of Quakes.

When building the Giant Stone Warrior I was fondly reminded of the Giant Ant-Man build from 76051 Super Hero Airport Battle which was part of the Captain America: Civil War wave of sets. The build is similar and gets the balance right of a lumbering giant with posable arms – four of them – to really enhance the playability of this set. This is a really well executed build with just the right amount of stickers to add to the overall aesthetic – thankfully, the cylindrical face piece is printed. The Giant Stone Warrior is an enjoyable build experience too, with the build techniques to create the helmet being an absolute highlight. Once completed and armed with two large katanas the completed build looks impressive and I was sure that this would be the highlight of 70669 Cole’s Earth Driller.

This was the case until I began work on building the Earth Driller. From the get-go, it’s a great build experience as you begin to create the basic structure and the mechanics of the gears driving the drill and engine take shape. The Earth Driller does draw on some of the design principles of the original, the wheels and drill use the same parts but with added flourishes. The completed machine is much bulkier than its predecessor with more detail and protection either side of the cockpit, and a lot more engine behind it. The completed model is much more convincing as having the power to drill into the earth and when the vehicle is pushed the mechanism that drives rotating parts at both end of the vehicle works beautifully.

The cockpit fits two minifigure inside very comfortably and includes a printed cockpit part, using a sticker to add detail and controls for our heroes once they’re inside.

I highly recommend this set from the perspectives of both the build experience and the finished set. It looks great and offers huge amounts of playability – a worthy addition to anyone’s LEGO NINJAGO collection.

70669 Cole’s Earth Driller is available now at shop.lego.com. You can help support Brick Fanatics’ work by using our affiliate links.