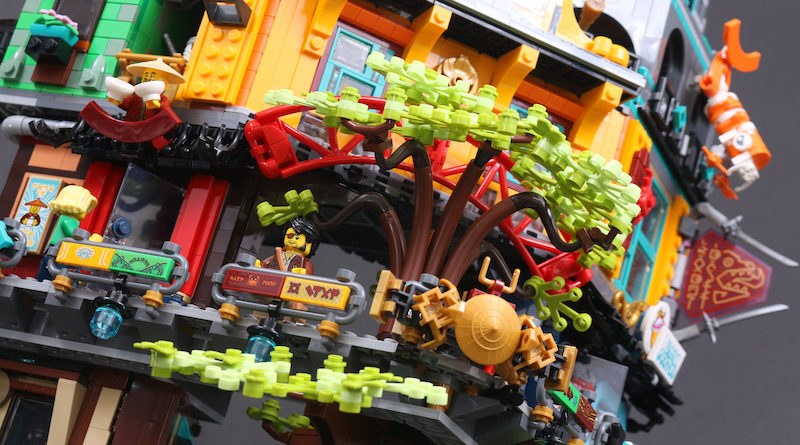 71741 NINJAGO City Gardens is a surprise but welcome return to NINJAGO City, offering a fun and engaging LEGO set at a ridiculous scale.

Coming in at 818 more pieces than 2017’s 70620 NINJAGO City and with as much baseplate coverage as 2018’s 70657 NINJAGO City Docks, 71741 NINJAGO City Gardens is an epic and fully-realised addition to the largest cityscape the LEGO Group has ever produced, and a more than fitting tribute to mark NINJAGO’s first decade as a theme.

Order today at LEGO.com through one of our affiliate links to directly support the work that Brick Fanatics does.

Taking that same multi-tier, multicolour, half comic book/half cyberpunk design approach as 70260 NINJAGO City from four years ago, 71741 NINJAGO City Gardens is packed from base to spire with brick wonder, across three huge levels that are built in five layers.

Each layer packs story and character into little buildings that stack on top of each other to combine for this high-rise tower of apartments, shops, tea rooms and even a museum. All together they create this truly awesome display and play piece that your eye will never know where to focus on first, and that such an impressive minifigure count as 19 could never look more at home within. At the same time, released to commemorate 10 years since NINJAGO’s debut as a LEGO theme, this is a set chock-full of nostalgic nods to its quite unique history, done so in a multitude of ways.

Some of these are overt and obvious and so immediately fun, whilst others act as a more subtle side-glance for the more discerning NINJAGO fan. Combined, such immersive details make for not only an extra level of intricacy and enjoyment to the model, but help contribute to the LEGO set’s eclectic, somewhat crazy appearance that perfectly embodies the spirit, colour and creativity that has been 10 years of NINJAGO.

Specific nods to most immediately enjoy include Zane’s Titanium statue, built to remember his sacrifice in defeating the Overlord; the set of coloured nanofigures for each of the ninjas that are scattered through the set; and the appearance of two Season 14 sets in the NINJAGO fan’s apartment. Both 71747 The Keepers’ Village and 71748 Catamaran Sea Battle can be found on the highest shelf, using just a few pieces each but still capturing the likeness of the new sets, among others throughout the apartment from the past 10 years.

Those references also go beyond the first decade of NINJAGO to include the LEGO Group’s own history, such as in the Ice Planet Ice Cream shop named after and inspired by the popular 1993 theme. In fact, there’s so much packed into 71741 NINJAGO City Gardens that we compiled a list of 10 things we spotted ahead of its release.

These meta hat-tips to the history of LEGO and NINJAGO are spread right through the set’s various rooms and levels, each of which serve almost as their own mini-sets, both for the time required to put them together and for the unique character and colour captured within them. Equally, where each sub-build is essentially the same thing (a room with roof or part-roof), they’re all constructed very differently, and you’ll truly marvel at the creative part usage deployed to achieve each one.

This is not a build process to rush through, but rather one to be enjoyed and appreciated, for the individual moments packed within, before they combine for the ultimate final model.

As full of references and story as the build is, the minifigures are certainly nothing to scoff at either – including the exclusive Golden Legacy Wu, a must-have for those wanting to further the collection of minifigures available in the NINJAGO Legacy 2021 sets. Some rare characters make a return too, with a new version of older Misako – previously exclusive to 70751 Temple of Airjitzu – and the return of legendary LEGO adventurer, Clutch Powers, who could only be found before in an accessory pack.

Other exclusive minifigures include an updated version of Ronin, another prominent character who is only now receiving his second minifigure. However, perhaps the most exciting inclusion of all for NINJAGO fans is that of The Mechanic, a villain who has proven a thorn in the ninjas’ side in recent seasons. This minifigure features a new face print, with a mechanical eye dominating his face, while a devious moustache hangs down. The torso further exaggerates The Mechanic’s devotion to technology with the start of his robotic arm, which is then represented with some bronze colouring. Even for non-NINJAGO fans, this character could work well in any steampunk display.

Four years on from 70620 NINJAGO City, 71741 NINJAGO City Gardens brings as many minifigures and 818 more pieces with it. Delivering the same complexity and sheer amount of chaotic charm and intricate building as that model is one thing, but to be able to do so at the same price for US and European builders and just £15 more for UK fans is comparatively remarkable value.

In its own right as a £274.99 / $299.99 / €299.99 LEGO set, 5,685 pieces is a huge piece count to receive and a more than acceptable minifigure count, too. In fact, that enormous piece count makes it the biggest NINJAGO build yet, with a price per piece of less than 5p. It certainly doesn’t lack in size either, so don’t underestimate just how much space you’ll need on the shelf.

At the same time, £285 remains a great sum of money to spend on a single LEGO set and, while it can certainly stand on its own as an excellent model full of charm and references, there it is no doubt that it is targeted most specifically towards NINJAGO fans, who will truly be getting the best value for money.

If there’s one area of 71741 NINJAGO City to criticise, it’s in the inclusion of that separate ground level garden island build, where Zane’s statue stands, specifically (and only) with reference to how it affects combining 71741 NINJAGO City Gardens with 70620 NINJAGO City and 70657 NINJAGO City Docks. In short, it gets in the way and visually marks too much of a drop when trying to create the ultimate NINJAGO City landscape.

Placing it to one side and focusing on putting the main model next to the previous two in the line-up and the cityscape comes together wonderfully. There are multiple ways to combine the three sets, but the chronological combination is perhaps the strongest. The flow across the bottom two levels is perfectly offset by the rise and fall of rooftops above – there is perhaps nothing quite like this three-set combination in the LEGO Group’s history, for just how chaotic, colourful, charming and gigantic it is.

Full of reference and reverence, 71741 NINJAGO City Gardens is a knowing tribute to the first decade of a LEGO theme like no other. The very energy and creativity that has driven NINJAGO for the last 10 years is wonderfully captured across a mammoth build, making for an inviting final model both in play and display.

For those who know their NINJAGO history, there’s no finer tribute to add to the collection, and for those looking to complete their NINJAGO City line-up, best start saving now, as this completes a rather unique trio of sets.

Support the work that Brick Fanatics does by purchasing 71741 NINJAGO City Gardens through one of our affiliate links – thank you.