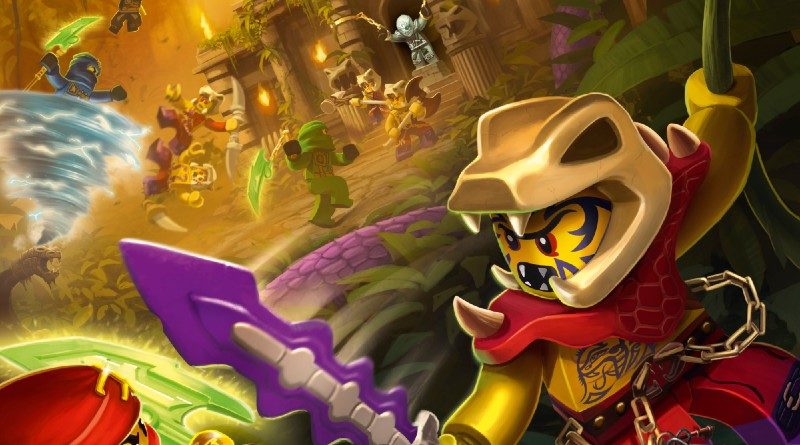 LEGO NINJAGO is now ten years old, so what better time to look back and explore the years that have brought this theme to where it is today, this time focusing on the first multi-season year.

2015 was one of the most important years for NINJAGO, a year that would lay the groundwork for the next five years and beyond. This was the year that the team behind the theme decided to have two seasons within one year, whereas the past four years had only had one each.

The first season of 2015 was the Tournament of Elements and relied heavily on fans having watched the last season, Rebooted from 2014. The season began with the ninja all mourning the loss of Zane, breaking up the team and pursuing new careers. Lloyd, the green ninja worked hard to reunite the team, bringing them all to the popular Chen’s Noodle House restaurant.

After a fight broke, the ninjas are lead into a back alley where a mysterious promises that their friend is alive. Hopeful, the ninjas leave the mainland and sail to the mysterious tournament, accompanied by Sensei Garmadon. This was to be one of the most story-central seasons of NINJAGO to date, introducing multiple new characters.

The most popular aspect of the season was no doubt the element masters, other characters who were able to control different elements, much like the heroic ninja team. The minifigures of these characters would be scattered across sets over the next six years, with the collection almost complete.

Some remained similar to their final forms such as Jacob, master of sound and Gravis master of gravity. Others, however, would not be reused until a later season. Some would remain through future seasons such as Skylor, master of amber and daughter of Chen.

Eventually, it was discovered that Zane was indeed alive, and had been captured by the evil Master Chen who was into so much more than noodles. By stealing the elemental powers one by one, he transformed all of his followers into an army of Anacondrai, the extinct serpentine tribe from the first season, that had to be banished to another realm.

Unfortunately, the banishment caused Sensei Garmadon to become trapped in the cursed realm, a place that would be explored soon enough. The first season was over, but that was not it for the year as another would soon follow.

Possession was the second season of 2015 and featured the ninja facing off against ghostly foes, all under the command of a possessed Lloyd. The green ninja was possessed by a jealous student of Sensei Wu who had long since passed to the cursed realm, returning only to take his revenge.

This season taught the ninja a new ability, named airjitzu, which allowed them to soar into the sky using their elemental abilities. However, this was not the only new aspect to be introduced to the team.

Nya, a prominent character for the past four years discovered a truth about herself early in the season, and found herself to be the elemental master of water, something she had assumed was impossible considering her brother was the elemental master of fire. Nya was made a permanent member of the team and began to train her new powers.

Other characters introduced this season were Sensei Yang, the creator of Airjitzu and Morro, master of wind. The latter was included in just two sets, one of which went on to be a best seller for the theme. 70738 Final Flight of Destiny’s Bounty was an updated model of the ninja’s home base facing off against a ghostly dragon ridden by Morro.

The final noteworthy addition of the year was the introduction of the 16 realms. individual worlds that made up the NINJAGO universe. NINJAGO was one of them and slowly over the course of the season more were revealed, including Legends of Chima, another LEGO theme. These realms could be accessed via the realm crystal, a highly-coveted item for many evildoers to come.

There was one last surprise for NINJAGO fans in 2015 though, with the biggest set of the theme revealed as 70751 Temple of Airjitzu. The build featured a three-storey recreation of the location from the show, accompanied by a blacksmith and marketplace.

LEGO NINJAGO had only just begun and had plenty more stories to tell and places to go. The next year would see the ninja face off against their most deadly foes yet, their own desires and faces from their past.