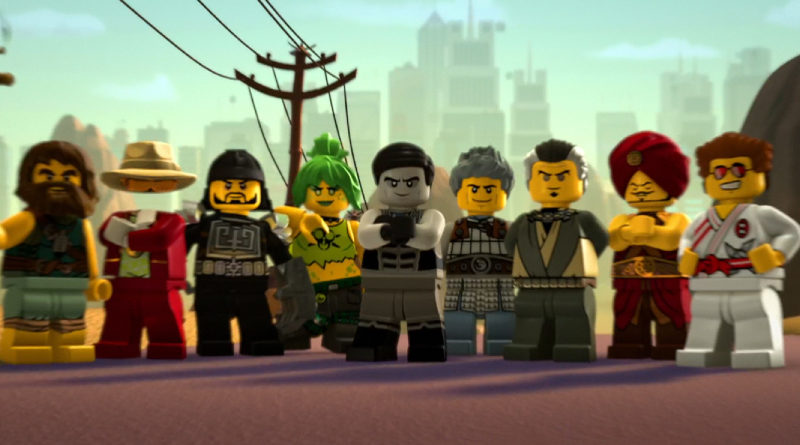 As LEGO NINJAGO approaches its 10th anniversary, it’s important to remember the minifigures and characters that brought this theme to where it is today, including the Elemental Masters that inhabit NINJAGO.

LEGO NINJAGO has had more than a few interesting characters and minifigures over its 10-year life, but few have captured the attention of fans as much as the Elemental Masters. After so many years, it can be hard to remember just how many there have been, and when they first appeared.

This list will cover spoilers for characters in various seasons of LEGO NINJAGO.

The two primary elements in the world of NINJAGO are creation and destruction. While technically greater than the elements themselves and not actually elemental powers, they are certainly worth a mention.

Creation is the power to give life to that which has none and to build something from nothing. It has only been wielded by a rare few characters throughout the show, but thankfully these characters have become somewhat common.

Both Sensei Wu and Lord Garmadon have wielded this power, for both good and evil. As direct descendants of the First Spinjitzu Master, creator of the NINJAGO world, they are the only ones able to harness this ability.

Both Sensei Wu and Garmadon have appeared in a great many sets over the years and can currently be found in 71718 Wu’s Battle Dragon and 71701 Kai’s Fire Dragon, which both contain a dragon, a creature in NINJAGO that is also able to use the power of creation.

On the opposite scale, Destruction is much more common among characters, but the minifigures are rarer to find. Destruction is a power that acts as the polar opposite of creation, to tear down what has been built and destroy what has life.

These three powers, only one of which is an element, have only ever been wielded by two characters. The Overlord and the green ninja himself, Lloyd Garmadon.

Darkness and golden power are presented as the ultimate powers of light and dark in the show and have been used an extremely limited number of times. Both have only ever been used by The Overlord and the green ninja respectively. Energy is the elemental power of Lloyd Garmadon and the most powerful of the elemental abilities.

Coincidentally, both of these characters appear in a new 2021 NINJAGO Legacy set, 71742 Overlord Dragon, recreating the epic confrontation between light and dark. Feel free to read our review of this new set.

These elements are wielded by the most commonly appearing minifigures in the theme, the heroic ninja themselves. Kai, Nya, Cole, Jay and Zane each wield these powers respectively and have appeared in far too many sets to count.

However, all of these characters are currently available in a single set featuring their mobile HQ and home away from home. 71705 Destiny’s Bounty depicts a vehicle that has become a frequent set over NINJAGO’s lifespan and is the only currently available set to include all six ninjas, including a much younger Lloyd Garmadon.

Amber is one of the more interesting elemental powers, allowing the user to copy any element through touch. So far only one named character has used it and their minifigure has appeared in three sets. Skylor first appeared in 70746 Condrai Copter Attack, then in a new suit in 853687 Accessory Set and most recently in 70651 Throne Room Showdown.

Shadow makes the user undetectable when in shadow, completely blending them in. Smoke transforms the user’s body into smoke, becoming intangible and unstoppable for a time. Both of these powers have been wielded by Shade and Ash for the good of NINJAGO. They appeared with Skylor in 853687 Accessory Set.

The Elemental power of metal makes the user truly immovable, a shining metallic form overtakes them and transforms them into a powerful and damage-resistant being. The only user of this power so far is Karlof.

Speed, however, allows the wielder to move incredibly quickly, dodging almost any attack. This power belongs to Griffin Turner, and both his and Karlof’s minifigures remain exclusive to 70756 Dojo Showdown

The Elemental Master of mind has the power to read other’s thoughts and predict their movements. They can also distract them with a sharp headache, making for quite a strategic ability. So far the only character using this power is Neuro, who first appeared in 5004938 Bricktober Minifigure Pack. He appeared alongside the master of fire, and one of the masters of time.

Time is easily one of the most powerful abilities in the world of NINJAGO, with four main functions. A user can speed up, slow down, rewind or simply stop the passage of time. There were two masters of time, who both existed at once. Krux and Acronix both appeared in 70626 Dawn of Iron Doom, as the main villains of the season.

The elemental master of wind is another that used their powers for selfish reasons, becoming a villain to NINJAGO. Morro was the villain for the 2015 wave of sets named Possession. During the story, he took a ghostly form and possessed Lloyd out of jealousy for not being chosen as the green ninja. Morro was included in sets 70738 and 70743.

The Elemental Masters of poison and light are more interesting in terms of their design since their minifigures were taken directly from LEGO Ultra Agents. Tox and Paleman are the names of the NINJAGO characters but their Ultra Agents counterparts appeared around the same time.

Toxikita appeared in both waves of Ultra Agents in 70163 Toxikita’s Toxic Meltdown and 70169 Agent Stealth Patrol. Her design features a tank top and spiked collar, with green marks adorning her face and skin. Invizable starred in 70167 Invizable Gold Getaway with powers including invisibility.

The NINJAGO characters are the same in both ability and design to that of the Ultra Agents villains, and their minifigures have only appeared in that theme’s sets so far. Interestingly, both have remained a part of the show in newer seasons, long past their Ultra Agents debut.

Only four Elemental masters remain, with three of the missing four appearing in a new 2021 set. 71735 Tournament of Elements, which Brick Fanatics recently reviewed, will launch alongside the new range of LEGO NINJAGO January 1. This new model includes three of the four minifigures needed to finally complete the Elemental Masters

Gravis is the master of gravity, gifted with the ability to control the natural force around him. This can make him fly and lift other people or objects by reversing their gravity or changing it in any direction. Jacob is the master of sound and uses his sitar to create sound waves to echolocate threats.

The element of nature gifts the user with the power to manipulate plant life, quickening growth to ensnare enemies in a trap. Bolobo is the wielder of this power and rounds out the elemental trio in the set. His minifigure appearance differs to the show in that it is bare-chested, giving a more natural look the character.

The final element in the NINJAGO world is form, giving the master the ability to change their appearance and voice however they so choose. Chamille is the master of form but has yet to appear in any LEGO set.

With just one character left hopefully the LEGO Group finally finishes this five-year-long series of figures. As to where could she possibly appear, Chamille was last mentioned by the master of metal to have gone bad. This may mean a future on the side of the villains, but we can only hope that it at least means a minifigure.