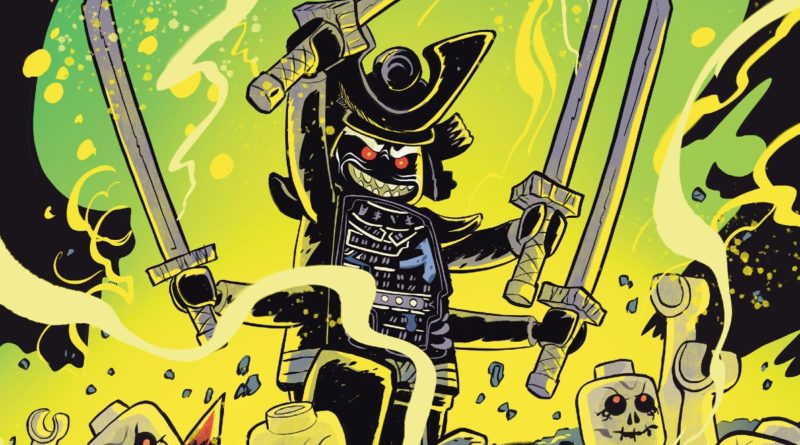 Father, brother, conqueror: the first LEGO NINJAGO comic from Skybound Entertainment sets out to prove that Garmadon is all that and more.

When a LEGO NINJAGO comic series based on Garmadon – the most iconic villain from the theme – was announced towards the end of 2021, it promised to continue the story of the character after he suddenly disappeared at the end of a recent season, March of the Oni. This offered a new way to explore the theme beyond the previous comics included in magazines and activity books, which have skewed towards a younger audience.

For those who are unfamiliar with LEGO NINJAGO and want to catch up, let this be your first and final spoiler warning as provided images cover major story elements of previous NINJAGO seasons. You can find a guide on what you need to have watched to understand the story in the FAQs at the very bottom of the review.

LEGO NINJAGO is over a decade old and as such, it comes with a fair bit of backstory that the design teams across sets, books and other media have continuously needed to familiarise audiences with, and it’s good to see NINJAGO Garmadon continue that tradition.

It does this through a quick but effective recapping of the story so far from the perspective of Garmadon, bringing us up to speed with the villain and introducing us to what might be the more conflicted side of the character.

Compared to other graphic novels from names such as Marvel and First Second, Tri Vuong has done an impeccable job of capturing the ever-evolving animation of LEGO NINJAGO with backgrounds and artwork, representing the action and beauty of the original LEGO theme’s animated show and sets well.

Those who have been watching the series for some time will likely appreciate the comic depicting a rural aspect of NINJAGO island that the series has barely explored since the introduction of NINJAGO City. This helps the story feel more personal to Garmadon rather than having him face the world-shattering events that the ninja face regularly. It also serves to remind the audience that while Garmadon isn’t evil in his current form, he isn’t exactly a good guy either.

That small-stakes story also acts as a good introduction to the theme, though previous knowledge of NINJAGO is rewarded with returning characters and other references. It will be interesting to see how this tale and its callbacks unfold over the next four issues, with the introduction of a new enemy and another variety of magical tea.

LEGO NINJAGO Garmadon’s first issue is well worth the $3.99 asking price for anyone new to or familiar with both comics and NINJAGO, and it stands as a surprisingly-comparable graphic novel to the likes of Marvel and DC. It respects the 11-year history of LEGO NINJAGO while adequately exploring the comic medium and the creative freedom that it can allow. The full series of five issues should cost less than most LEGO NINJAGO sets to boot.

This book was provided for review by Skybound Entertainment and Image Comics.

Any LEGO purchases you make via our affiliate links helps to keep Brick Fanatics up and running. Thank you for your support!

What is LEGO NINJAGO Garmadon?

LEGO NINJAGO Garmadon is a series of comics books based on the LEGO theme, featuring characters from the animated show in a new story.

How much does the first issue of LEGO NINJAGO Garmadon cost?

The first issue of LEGO NINJAGO Garmadon costs $3.99 in the US, but regional prices have yet to be confirmed.

Garmadon was the villain of LEGO NINJAGO’s first season and has been a recurring character ever since, as both an ally and an enemy to the ninjas. He is also the father of Lloyd Garmadon (the green ninja), the brother of Master Wu and the son of the First Spinjitzu Master – the creator of NINJAGO.

Which seasons of LEGO NINJAGO do I need to watch before I read these comics?

LEGO NINJAGO Garmadon has been confirmed to take place after March of the Oni, so you should aim to watch at least that season. However, we’d recommend watching the pilot episodes, Rise of the Snakes, Legacy of the Green Ninja, Rebooted, Sons of Garmadon and Hunted too. Of course, watching the entirety of LEGO NINJAGO will help you further understand the comics.

When does LEGO NINJAGO Garmadon #1 release?

The first issue of LEGO NINJAGO Garmadon releases on April 6, and the second issue launches on May 11.

Is LEGO NINJAGO Garmadon canon to the animated series?

The comic series has been named as a new chapter of LEGO NINJAGO and takes place after the March of the Oni season, continuing the story of the classic villain, meaning it is likely canon to the animated series.