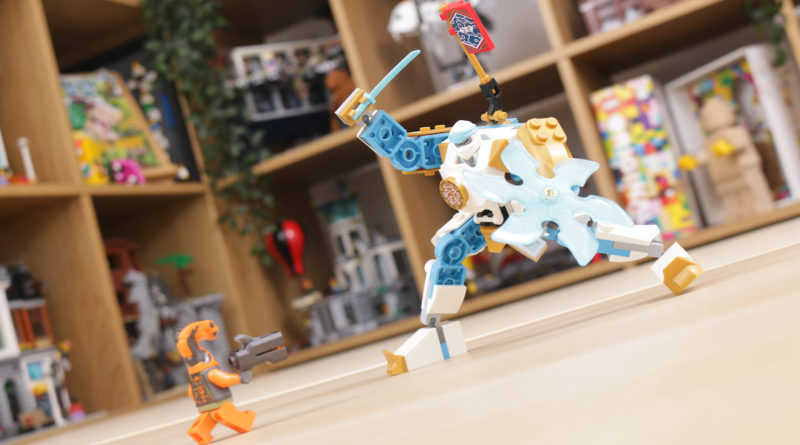 71761 Zane’s Power Up Mech EVO has been designed for a new, younger generation of NINJAGO fans, and it’s still a great LEGO mech.

As detailed simply and wonderfully by LEGO NINJAGO designer Niek van Slagmaat on social media on the day these sets were revealed, this latest wave of NINJAGO represents something rather new for the expansive, enduring theme. Of course, every wave of NINJAGO sets represents something new, given how the team of ninja traverse between various worlds, lands and storylines and encounter any number of different villains and scenarios.

Yet this January 2022 range is the first for a while to offer what is essentially a reset on the theme – it is disconnected from other content around the NINJAGO world (so no immediate tie-in storyline), it has been created to represent ‘the epitome of NINJAGO toys’ and it is a wave of sets that has also been developed with a new age group in mind, offering something in between the junior 4+ and the more advanced 7+ accessible sets, for the 6+ audience. And one such 6+ set is 71761 Zane’s Power Up Mech EVO.

Considerations for designing at the 6+ age range include subtle advancements in the challenge of the build when compared with a 4+ set, but in a way that still avoids the more intricate parts more typically found in 7+ and older sets. The result is quite easily seen in 71761 Zane’s Power Up Mech EVO, which can best be described as a chunky yet smartly-designed mini-mech.

The build is split across two sets of numbered bags, with the first stage putting together the mech’s basic form, and the second stage adding the armour and detailing. The construction includes a lot of symmetry and is a build style that encourages study of how all the different pieces work – yes, each step is relatively simple for older builders, but it doesn’t make it any less interesting a model to put together.

The end result is pretty comparable to the Marvel character-based mechs that the superhero theme is really leaning into at the moment, but within a sturdier construct that means no articulation at the elbows or knees, thanks to the new ‘locked hinge’ piece.

Such is the use of colour and the interesting pieces included, though – and all for less than £10 / $10 / €10 – that there’s enough charm and character in 71761 Zane’s Power Up Mech EVO that this reduced articulation is less of an issue, plus there’s also enough appeal to this set to elevate it away from feeling too junior for older builders.

Likewise, for a mech missing two key points of articulation, it could hardly be described as lacking – there’s a great deal of poseability to be explored and, with that, a lot of fun to be had. It has a sturdy, solid feel to it, great use of colour top to bottom and a couple of printed parts as a nice little bonus too.

Most importantly, it just looks great. With Zane’s light blue and white colour scheme accented with gold armour, 71761 Zane’s Power Up Mech EVO really pops, with Zane sitting snugly in the cockpit and not (as is the case with some of those Marvel mechs) looking dwarfed by his own machine, but rather a pilot very much a part of and in control of all those ninja moves it’s doing to that poor snake.

Zane and a Cobra Mechanic are included in 71761 Zane’s Power Up Mech EVO, both designed to reflect the almost comic book nature of this wave’s design, with bold, bright colouring across just-as-detailed character designs. The orange of the Cobra Mechanic serves as a great visual contrast to the white and blue colours of the mech and Zane.

Any NINJAGO mech that comes close to the £10 / $10 / €10 mark and isn’t a 4+ set is worth any LEGO fan’s attention. The design team for this theme past and present are responsible for almost all the best mechs the LEGO Group has ever produced now, and that includes at the smaller end of the scale. 71761 Zane’s Power Up Mech EVO is one such expertly-designed mini-mech and that it comes in at £8.99 / $9.99 / €9.99 is quite remarkable value.

That 71761 Zane’s Power Up Mech EVO is designed to a new age group of 6+ is certainly a point of interest, and an insight into how young LEGO builders develop their creativity and understanding with the brick.

But what is a simpler LEGO set on face value should not be overlooked for such a first impression, nor the age recommendation on the box. 71761 Zane’s Power Up Mech EVO brings all the same detail, action and fun of any of NINJAGO’s other recent smaller mechs and makes for a fine addition to the collection.

You know it’s a good mech if it has you pining for Exo-Force, and 71761 Zane’s Power Up Mech EVO certainly has us doing that…

Support the work that Brick Fanatics does by purchasing your LEGO NINJAGO sets through one of our affiliate links.

How long does it take to build LEGO NINJAGO 71761 Zane’s Power Up Mech EVO?

It takes about 15 minutes for an older builder to put together 71761 Zane’s Power Up Mech EVO, primarily because it is a 6+ set.

How many pieces are in LEGO NINJAGO 71761 Zane’s Power Up Mech EVO?

There are only 57 pieces included in 71761 Zane’s Power Up Mech EVO, but a lot of them are larger and really help stretch the boundaries of what’s possible with such a small count.

How much does LEGO NINJAGO 71761 Zane’s Power Up Mech EVO cost? 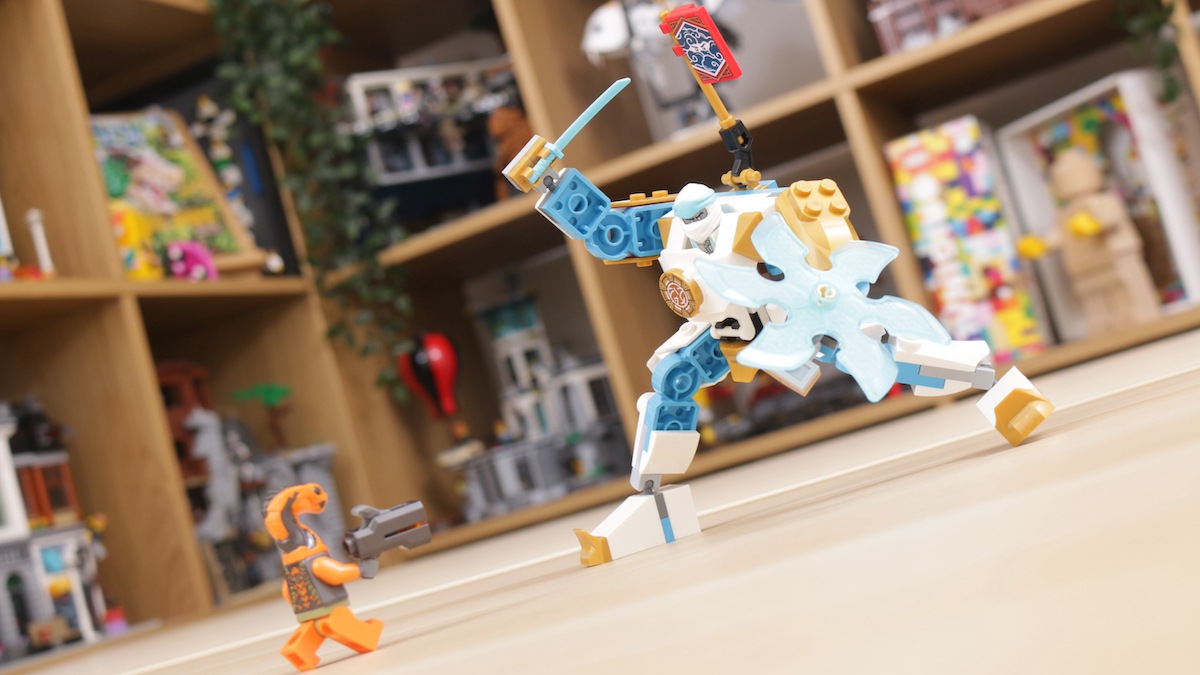