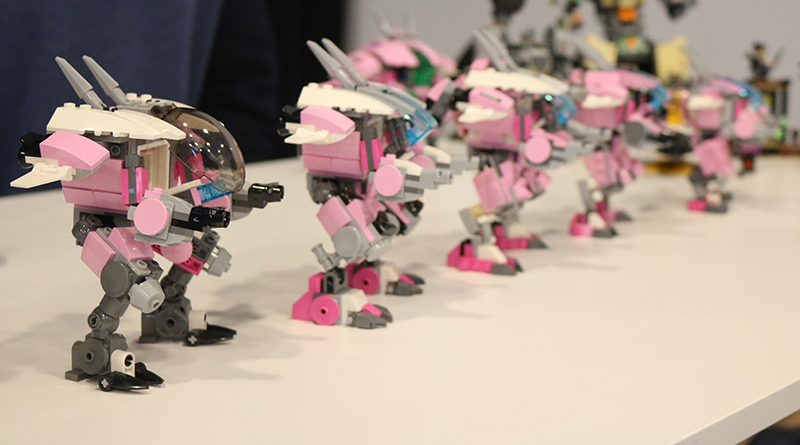 LEGO Model Designer Woon Tze Chee explains how he took two of the most popular characters in Overwatch and brought them together in 75973 D.Va & Reinhardt

The big new theme that launched 2020 for the LEGO Group was Overwatch , as the company looks beyond films and television for compelling stories to capture.

75973 D.Va & Reinhardt is one of the models that has caught the attention of fans, and at LEGO Fan Media Days 2019, LEGO Model Designer Woon Tze Chee is sitting with a row of models that he built as he refined the set.

Are these [see image] all of the work in progress models for 75973 D.Va & Reinhardt?

Maybe this is about half of them for D.Va. For Reinhardt this is all of the sketch models I have done. Surprisingly I got it right in a very short time. When the Creative Lead said I think we want to include Reinhardt in the set, I was wondering how I could change or translate the organic form of Reinhardt into the brick form, I was a little bit unsure and I started building that sketch model. It surprisingly turned out not to be as difficult as I thought.

Was D.Va going to be a model on her own initially?

No, we had a few different ideas along the way about what we would do with D.Va in the set. At the end of the day we decided Reinhardt would be a good fit because they are both tanks, in fact they are both probably some of the more selective tanks within the competition if you play the game.

Was there any pressure in designing a fan favourite like D.Va?

The quick answer to that is yes. You always get a little bit of extra pressure whenever you work on something iconic, it doesn’t matter if it is Overwatch or any other brand that you have. If you work on a specific vehicle that is very popular, you want to make sure you get everything right. That is also what a model designer really wants to do, to get everything right so that everybody is really happy with it.

That is why as you can see she took a lot more tries to get it right, that is one of the first sketch models that I did. We started off small, we wanted to make it as close as we could to a minifigure because in the game the mech isn’t that much bigger as compared to pilot, but there was a lot of challenge when it came to stability, there were a lot of details that are missing. Also, just a  good product as itself to hold it, this feels good – the smaller it goes the less you feel when you hold it in your hand.

At the end of the day the decision went from that size to a much bigger one because we just thought, together with the partner, this is what will make a good product. That is the main driver when it comes to what size we will set the model at – what makes a good product.