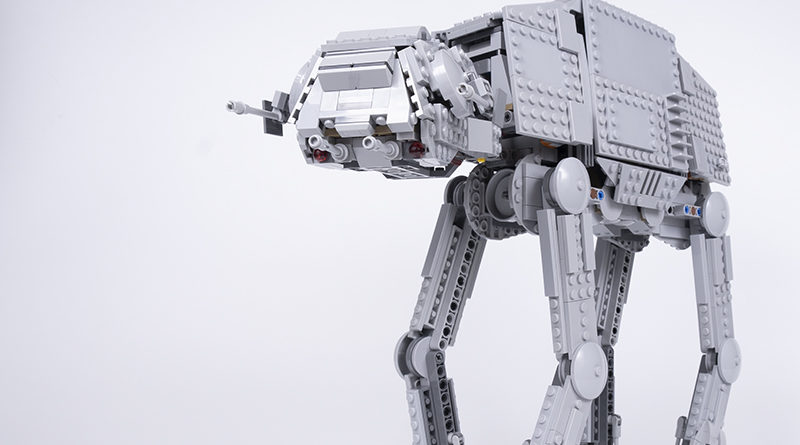 Collectors are tuning their macrobinoculars as something appears on the horizon – it’s 75288 AT-AT, the latest LEGO Star Wars set based on the Empire’s dreaded walker.

Of all the toyetic designs in Star Wars, one has captured the imaginations of children and the young at heart more than almost any other – the AT-AT Walker. There’s a very tangible sense of menace as the mechanical beasts lumber across the ice plains of Hoth, looming over the rebel soldiers on the ground. They offer an alternative to the zippy starfighters and show more inventiveness than a wheeled vehicle.

It makes them perfect for translating into toys, yet the LEGO Group has overlooked the walking tank for a while. After releasing four in the space of 11 years, there hasn’t been a minifigure-scale version for six years. There was 75189 First Order Heavy Assault Walker in 2017, but the sequel trilogy iteration lacks the elegance of the original classic walker.

Six years is a long time in LEGO design, so 75288 AT-AT has the potential to offer something worthy of fans’ attention.

This version of the AT-AT Walker does not reinvent the build method for the vehicle. Instead, it adapts and improves a design that has worked well several times before. The basic shape of the All-Terrain Armoured Transport has been captured so well in the past that it would be ludicrous to try some completely new structural method at this point. The design really has been elevated this time around, though, with even some small improvements offering a much-enhanced model.

One apparent difference between this release and its immediate predecessor 75054 AT-AT is that it’s a few centimetres longer, which improves the proportions significantly. There’s something about this set that you immediately notice as being more screen-accurate, without necessarily realising what it is. It’s amazing what difference just a few studs can make.

What looks like the head of the AT-AT, but should probably be referred to as the cockpit, is the most accurate depiction in LEGO pieces yet. This version delivers the characteristic guns and angles, but for the first time successfully delivers its long profile. That’s another thing you might not have noticed being off, but will definitely notice being right. It’s also double-jointed, able to turn at the head and the neck, offering better poseability than previous releases. As for the inside, it actually has space for General Veers as well as two AT-AT Drivers, giving fans the opportunity to more faithfully recreate the movie scene. (They obviously don’t have much elbow room, though.)

A clear example of how the main body has been improved is in the additional sloped panels on this version – rather than just feeling like a box, subtle shifts in the shaping accurately reflect the way the movie prop looks on-screen. There’s also a little more texturing than we’ve seen before thanks to grille tiles and recessed sections, which really gives the model the mechanical feel it demands.

Despite the outer legs hiding the Technic pieces and pins well, the point at which they connect to the body makes little effort to disguise them, which is particularly obtrusive as blues and browns don’t belong on an AT-AT. There’s a similar issue where the cockpit connects to the main section. It might seem like a minor gripe, but if this was fixed then this model would be pretty close to perfect.

The moving panel that provides access to the main body’s interior is great – it pulls out and then can be pushed up out of the way, allowing full access to the troop area no matter how big your fingers are. There are five seats inside, so anyone who has extra Snowtroopers can load it up. It’s probably better to have extra chairs than the trapdoor that was included in 75054 AT-AT.

A winch is included towards the front of the body, which allows Luke Skywalker to be raised beneath the AT-AT, as if he is grappling up to hurl in a thermal detonator. It’s much better than the way this was portrayed in 8129 AT-AT Walker and makes for a well-executed, relevant play feature. There’s even a gap to represent where he slashed with his lightsaber to make a hole for the bomb.

Those who have built a LEGO speeder bike before won’t find anything too exciting in this set’s mini build, but it adds something extra and fun. For some reason the vanes at the front have a really loose connection, and it’s surprising it passed the LEGO Group’s quality checks.

Building this Star Wars icon is thoroughly enjoyable – thanks to the variety offered by the different sections, it never gets dull. While the legs are repetitive, they don’t take long to build so don’t end up feeling like a chore.

Posing the AT-AT requires some patience – if you position one of those legs wrong, it will start sliding and end up floored. Nice positioning is definitely possible thanks to multiple joints in each leg, as long as you take your time. Getting subtle leg shifts in place is incredibly satisfying as it does leave the machine looking as if it is about to take a step, especially when the head position is also taken into account.

The AT-AT Drivers are excellent minifigures, with nice colours complementing detailed design. They don’t offer much, if any, improvement on the last time they were available. It’s actually an occasion where the changes are so small that it begs the question why the LEGO Group didn’t just dust off the designs from last time. That said, they are great minifigures and the helmet printing is particularly impressive.

General Veers gets a more notable upgrade, with his helmet piece that features printed goggles now used for the character. He has a determined expression and a happy one (the Empire famously being all smiles). Best of all, his torso has been updated to make better use of subtle printing, making it more accurate to what was seen in The Empire Strikes Back.

The Snowtroopers are the same as those introduced in the Action Battle sets, which is no bad thing as they now feature fancy leg printing. The helmet design has been around for a while, but needs no improvement. Army builders will be delighted to have two more of these cold-climate Stormies.

This Luke Skywalker minifigure was introduced last year and is the best version in his flight suit yet – unfortunately not for Hoth though, as this is his X-wing outfit rather than his Snowspeeder outfit.

Thanks to its imposing size, with the finished build towering over minifigures stood alongside it, this feels like as fair a price as can be found in the LEGO Star Wars theme. It’s by no means cheap, but for the money you get a really hefty model that stands out on display and is also packed with play opportunity. A couple more Snowtrooper minifigures would have sweetened the deal, but that’s always the case.

Discounting the wonderful function in 10178 Motorised Walking AT-AT, 75288 is the best LEGO AT-AT yet. It’s definitely the most accurate – it is amazing how important the head is to this vehicle, with the extra length making this look incredibly close to the actual movie design. As well as ticking all of the aesthetic boxes it needs to, the model also includes space for three Imperials in the cockpit and features the delightful function to allow Luke Skywalker to heroically defeat the lumbering machine. It’s hard to imagine how any Star Wars fan could be disappointed.

75288 AT-AT is available now at LEGO.com. You can help support Brick Fanatics’ work by ordering using our affiliate links.