The fearsome Darth Maul makes his first large scale appearance as a LEGO Star Wars buildable figure. How does this unforgettable character translate in the constraction medium?

Darth Maul was, for many, one of the only redeeming factors of Star Wars: The Phantom Menace. As such, fans of the Star Wars constraction line have no doubt been waiting for him to make an appearance. Thankfully, they will not be disappointing. Maul’s unique double bladed lightsaber, which provided the coolest part of the still memorable Episode I trailer, takes centre stage, with LEGO designers taking full advantage of it. The end result is a figure that is functional, fun to play with, and an accurate depiction of the character. 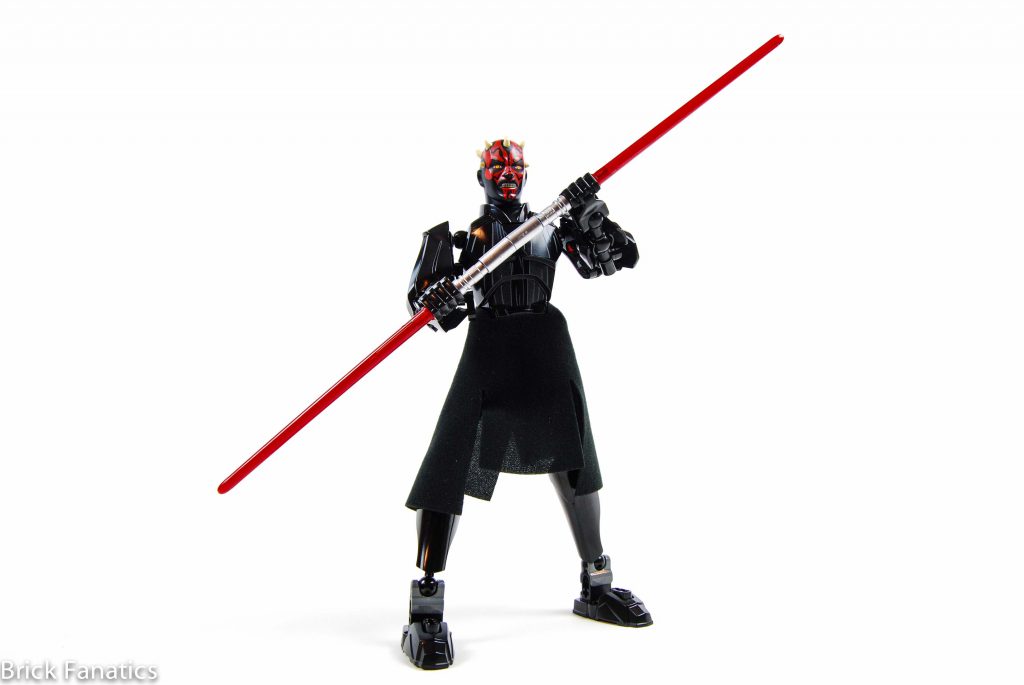 A common complaint leveled against the human figures, those not encased in armour, in the LEGO Star Wars contraction line has been that they look goofy and slightly off in their proportions, specifically around the leg and hip area. Thankfully, Darth Maul’s onscreen look provided a useful – and literal – cover for this problem. Ray Park’s costume included many layers of fabric, including the ‘skirt’ that is recreated as part of this figure. The LEGO Group has included this detail using a fabric part that wraps around the character’s midsection, conveniently hiding all of the articulation at the hip and most along the length of the leg. This concealment, along with the added bulk it gives, dramatically improves the look of the character and allows Darth Maul to avoid the problem of looking goofy which he most certainly does without it.

Darth Maul’s most memorable aspect, his double-bladed lightsaber, is the centrepiece of 75537 play feature. A simple triad of gears, rotated by a handle which protrudes from the figure’s back, raises and lowers each arm in opposite directions. Since the arms are joined at the hands by the saber’s handle, the result is a surprisingly effective slashing motion that looks fairly realistic. The hands lower each time the motion is repeated so after about ten slashes, one must stop and raise the arms again, but it is extremely satisfying while it lasts. Parts lovers will also appreciate the chance to obtain two of the constraction lightsaber blades in trans red.

The Sith Lord’s robes also aid in the presentation of his sleeves, which do not look off when bulked out a bit from the components used to depict constraction arms and shoulders. Common to all buildable figures are the unique molded heads, and this one is especially effective  due to Maul’s distinctive appearance. His horns and tattoos look appropriately menacing.

This energetic Zabrak’s acrobatics can be accurately mimicked thanks to the extensive range of motions imbued in constraction figures. Some of the more extreme or dancer-esque poses look particularly funny considering the source material, and of course popping a couple of joints loose allows for a very fatalistic movie moment to be re-created.

Fans of constraction who have concerns about non-armoured humanoids in the theme can lay those fears aside when it comes to 75537 Darth Maul. This is a very satisfying figure, with excellent and effective play features. His menacing on-screen presence has been captured quite well and the two lightsaber blades add some useful parts. On the whole this is a set that comes recommended for fans of the buildable figure range.

75537 Darth Maul is available now at shop.LEGO.com. You can help support Brick Fanatics’ work by using our affiliate links.